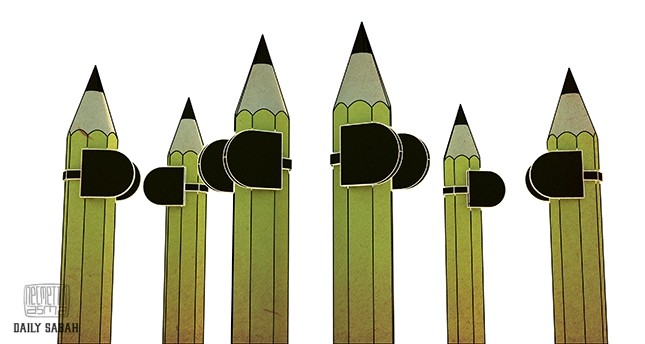 While gifts being sent to journalists and newsrooms is met with indifference, its damage to the newspapers and our vocation demands that the ethical principles of the matter must be enforced with equal fervor

New Year's Eve is approaching at fast speed. The newsrooms of numerous media organizations will be filled with shiny boxes; however big or small. These are gifts sent to journalists by many different companies.

Usually these gifts are as varied as their number. Some are simply congratulatory notes accompanied by flowers while others are day planners with matching pens. Some boxes will contain voice recorders while others will have watches or desk clocks. Cakes, biscuits will most likely be shared around the office. There are no limits to these gifts either. Sometimes there are very valuable objects among the pile.

It is not an original story as it happens every year in newspaper offices. No one bats an eye to these gifts as it has become commonplace. But we have to ask ourselves. Is this normal or acceptable? Can journalists accept gifts from people or organizations that share a relationship with them via the news? Let us consider not only the gifts received on special occasions, but also those that are given during highly coveted press tours or advertisement products that are sent for review in the guise of a gift.

Last week, we focused on the consequences of improper relations between journalists and other parties of a news article. Throughout the article titled, "Unethical 'benefits' of journalism," we focused on press tours while also touching on the gifts given to the journalists as well. Today, we will elaborate on that.

As we said last week, "Accepting or requesting money, a car, a house or similar expensive, material gifts with the promise of writing a news article or preventing one from being published is a crime. This falls under the realm of the rule of law and, as a result, prosecutors. If there is a relationship between a journalist and any other person, association or company in this manner, this must be proven and punished in accordance with the rule of law."

Today's subject matter is focusing on relationships that do not constitute a crime, hence subject to punishment by law, yet are problematic from an ethical standpoint.

Around the world, there are newspapers that act extremely vigilant in this regard and allow no such gifts to pass through their doors. There are newspapers that adopt lackluster efforts toward thwarting it and essentially giving a green light to the practice. By looking to the effort made by newspapers on this matter, we can more or less discern an opinion on the journalism of the said country.

When we look at Turkey, we realize that there is a vast chasm between what is set in theory and what is done in practice. Let's repeat last week's ethical principles taken from the Media Association's pamphlet titled, "Ethical codes for journalists in Turkey," to give you a glimpse of the theoretical aspect:

Let's add the related principle from the Turkish Journalists' Declaration of Rights and Responsibilities as well in order to cement previous finding:

"Journalists should reject personal gifts and material benefits that would create doubt or prejudice in the public over the contents of a particular news item or information and the decision to make it public."

In the past both press associations and public relations associations released findings and studies in order to fix the situation to everybody's satisfaction. They continued to bring the matter to the public eye and managed to instill a somewhat present sensitivity to the matter. Unfortunately though, the lack of universally accepted and competently enforced ethical codes still continues.

Current opinion on the matter is that it depends on the quality or nature of the gift. They argue that if the gift is merely sentimental and carries symbolic value as opposed to material value, it is acceptable for a journalist to accept these gifts.

However, there is no governing body nor joint declaration that regulates the upper limit or exact classifications. I believe this can only be determined by newspaper administrations.

Newspaper administrations must enact and enforce the exact requirements and rules upon which gifts can be accepted and which gifts must be returned. If necessary, these rules must be incorporated to journalists' employment contract and disclosed to the existing ones in order to get their acceptance.

Journalists also have some responsibility to shoulder. They must inform their superiors in newspaper administrations on the gifts they receive.

Those who fail to inform the newspaper administrations or act in an unethical manner in this regard must face the necessary consequences.

If there are products that require in-depth reviews, they must be taken on in a trial basis and returned after the related news article is published.

This is a matter of merging gifts with bribes and plunder.

As these irresponsible acts are accompanied with apathy, it results in a web of dirty relations and acceptance of an unethical situation as the current normal. Our newspapers lose their income while our vocation is losing its dignity.
RELATED TOPICS