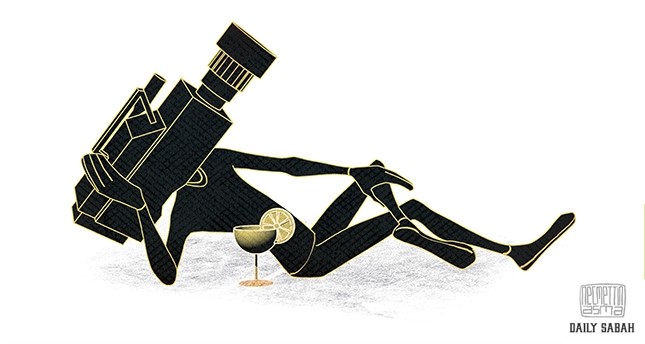 If you have been following Turkish news in recent weeks, you are undoubtedly aware of the recent terror attacks that happened in Istanbul on Dec. 10 and in Kayseri on Dec. 17.

The Kurdistan Freedom Falcons (TAK), a branch of the PKK terrorist organization that has plagued Turkey for many years, claimed responsibility for the attacks.

The terrorists used car bombs in order to achieve their heinous crimes that caused the deaths of tens of people, including policemen, soldiers and civilians. Among those who lost their lives during the Istanbul attack was Halis, the police son of a neighbor. I saw him only a day before the attack when I was parking my car. We had greeted each other and talked about his little baby, who is only a couple of months old.

The thundering sound that came from the bomb attack near the Vodafone Arena sports stadium in Beşiktaş, Istanbul was so loud that it echoed in my office in Gayrettepe, 5 kilometers away from the attack site. I first heard a thunderous sound and then came the brief but frantic cries of seagulls.

My fears became reality when the phone calls and messages started to rain in; this was a terrorist attack.

I remembered that only half an hour ago I drove passed the exact spot of the attack following dinner with a friend in Taksim. I was both saddened and surprised. Many of our colleagues had similar tales of a narrow brush with death, considering our newspaper headquarters is quite close.

My hand went to the remote control to tune in to the news. I watched the news coverage of the blast all night. I grieved once more. Unfortunately, Turkish media had once again played right into the hands of those who orchestrated the blast and they were once again far from responsible broadcasting.

Both in the Sabah newspaper and in the Reader's Corner of the Daily Sabah, we have expressed, emphasized and pleaded numerous times: The main goal of the terror attacks do not lie with victimizing the physical targets of the attack but they try to victimize an entire society. They do this by using the media as a tool.

When I was watching the news that night, one reporter said, "There is great turmoil, a state of chaos is present on the site and people are in panic."

Perhaps the reporter thought that he was reporting negatively on the attacks but all he did was spread fear and terror. Not to mention that channel did not even have video or pictures supporting these claims. He acted as a public relations officer for the terrorist group without even knowing it.

Another channel and website of a newspaper released photos of blood and carnage with the flashing title of, "First photos from the incident site."

They seem to be completely swept in a daze of news and ratings. They did not even give a moment of consideration to the privacy of those injured or killed. Same goes for the feelings of those who lost their loved ones as well as the mental health of the society.

Another problematic thing is that we learn nothing new or factual when watching these news channels beyond the initial tidbits of information. Not only that, they only serve to confuse us even further. The method of attach, culprit, goals and outcomes are continuously changing with unconfirmed claims.

This period is one when speculation and manipulation reign supreme. Actual news has no say anymore. Just like the terrorists wanted, shock, confusion and false information has settled in to the minds of the people.

Someone says, "According to the info I just received there were other explosions across Istanbul."

Even though this dubious information turns out to be absolutely false, no apologies or corrections come forth.

Not only that, they continue to sit on their chairs and continue to talk as supposed experts. At the same time some, who suffer from chronic opposition, try to channel the suffering born out of terror into political capital with comments devoid of any human sensitivity. I wonder whether they are ignorant of the fact that the terrorists' goal is to disrupt the unity and solidarity of society or are they simply serving to these ends willingly.

While TV channels are in this sorry state, let us turn to news websites for hope. We quickly find out that is not meant to be, they are no different from their counterparts.

So then, how about social media? On one side there are ethics campaigns, while on the other there is a disinformation machine fueled by accounts connected with terrorist organizations. Not to mention those who can't bring themselves to call terrorists, terrorists. And of course let us not forget those who use these terrorist attacks as an opportunity for professing hate and anger against the people who stopped tanks from advancing on July 15 during the failed coup attempt.

There is no doubt that it is not the media's job to hide information from the public. Nor is it the media's job to hide or ignore terrorist attacks. After all, even if you close your eyes, the world will continue to revolve and terror attacks must be covered as quick and correct as possible. The awareness of the people must be raised while they are being informed.

But none of the examples we listed above can be considered journalism, or at the very least good journalism. During these situations, media blackouts are not a solution either. Our priority must be to instill the ethical rules into every journalist when covering terrorism, while training experts who can cover this type of news.

The ability to reach people, connect with the masses and get a shout out is a powerful and useful tool. But like many powerful tools, it also carries with it dangers and disadvantages. Social media gave people the keys to this ability and, combined with a vocation such as journalism, we are able to gain another outlet other than our respective newspapers, TV channels or news websites.

Following the immense popularity of social media platforms, such as Facebook and Twitter, many news organizations sought to regulate their worker's activity on these outlets; and while the outcomes may vary, the reasons were pretty much the same.

Considering the influence journalists had especially during times of crisis, the public usually turns to faster methods of getting information. The social media accounts of journalists have been able to deliver in spades but this platform also became the one with the least amount of control and editorial oversight in the media industry.

In the past there were numerous articles on this matter in the Reader's Corner by İbrahim Altay and for more information you can check the articles titled "Social media use by journalists" and "Journalists and social media", published in March 9, 2014 and May 30, 2016, respectively.

But instead of beating this proverbial horse to death, let's look to more current matters. After the twin bombings that claimed the lives of 44 people and injured 155 others, a foreign journalist residing in Turkey a tweeted the following:

It was sent by German Deutsche Welle (DW) correspondent Chase Winter. The tweet caused almost immediate outrage on social media, forcing Winter to explain his tweet as a simple statement and was not intended as praise for the PKK terrorists.

However, after some digging done by harsh critics of the tweet, several photos of Chase Winter were posted, featuring him together with PKK members, dancing and posing for photos alongside him.

While some considered the outrage as unjust, consider this: What if a foreign journalist living in New York posted mere hours after 9/11 attacks that terrorists were highly successful? What would be the response of the American public then?

Even if we set aside the pictures, the tweet itself was certainly in bad taste. Not only that, due to his journalistic occupation, it reached many people, while some of the backlash also transferred to his parent media organization.

This is why a journalist should think twice before posting even an innocent sentence and measure the possible public response. This is even more important for the tweets posted after a deadly terror attack that took place in the center of Istanbul, with tensions running high across the country as a result.