No half measures in corrections 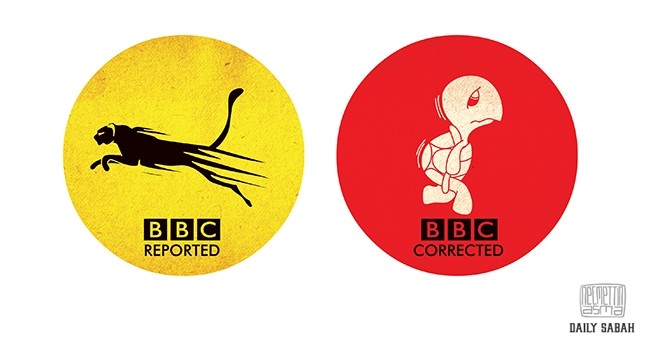 With the lack of a swift correction system, media organizations not only damage their credibility by the dissemination of false news but also increase the public's exposure to these reports to such an extent that lies become more popular than the truth

It is an unfortunate fact that the old saying, "A lie can travel around the world while truth is still putting on its shoes," has become profoundly clearer as the methods of correspondence and transport continue to advance.

This is especially relevant in our sector, since the more scandalous or outrageous the news, the more traction and larger audience it will find. Yet these qualities also make the news in question all the more likely to be false. The journalist's job is to tackle this by finding out the truth, reporting on it and yet continue to hold the public's interest.

It is why methods of confirmation, quotation and visual evidence are implemented and required in news reporting today. However, some fallacious pieces slip through the cracks. False news pieces are certainly a blow to the credibility of a newspaper as well as the journalist, but are also somewhat inevitable. That is why the system of editing and correction is also a vital part of journalism.

In order to mitigate the damage to our reputation as well as the public's perception, our system of corrections must be swift and decisive. During the past week, a report from the British Broadcasting Corporation (BBC) showed the likely problems with slow and faulty correction.

This tweet was accompanied by a news article on the BBC website titled, "Turkish Airlines cargo plane crashes into Kyrgyzstan homes."

However, the news was incorrect in one crucial factor. The cargo plane in question was not a Turkish Airlines (THY) plane. It was a Boeing 747 belonging to ACT Airlines.

So with that background information at hand, let us look at the correction process. We contacted Yahya Üstün, Senior Vice President of Media Relations at THY in order to find out what was done to correct the false information. A statement released by his office also relayed detailed information.

Approximately two hours later, Turkish Airlines released a statement and initiated contact with stations abroad. An hour after that, the Public Disclosure Platform (PDP) of Turkey also released an announcement, both in Turkish and English.

Of course this does not include the numerous Twitter users who reacted promptly and replied with the correct information. Yet hours later, the original tweet continued was still up.

There is also the matter of the BBC featuring an unrelated Turkish Airlines plane on the tarmac along with their false report but that is another matter entirely.

After a lengthy period, the BBC sent a new tweet with the correct information and changed the title of the article to "Kyrgyzstan plane crash: Dozens die as Turkish cargo jet hits homes." However, the original tweet stayed as well. With the traction it got, the original tweet with mistaken info was more visible than the correct second version and misinformation continued to spread thanks to this decision to not take it down. After almost a day of back and forth, THY finally managed to get the BBC to remove the false tweet.

So, even with information that can be easily determined as false, the BBC correction system took almost a day to properly deal with the situation. After all, this was not some hard to confirm vague report or biased opinion on a political issue, but a cut and dry case of fact-checking that a simple phone call could have solved.

The delay in correction as well as keeping the original tweet online caused a number of other news organizations to report on the mistaken info as well. Allow me to quote a news report on Daily Sabah regarding the issue titled, "Turkish officials, social media users condemn media outlets for false report on plane crash" in order to mention some of the media organizations that reported the plane belonged to Turkish Airlines.

Reuters was one of the first sources to claim that the plane belonged to Turkish Airlines, but later updated its report to note that the aircraft belonged to ACT Airlines.

"Kyrgyz authorities earlier on Monday had stated that the aircraft belonged to Turkish Airlines, a claim the company denied" AFP said.

There are some others who based their reports on the initial false information such as ABC news and with every media organization relying on the reputation of the other, it spread like wildfire.

The reports in question quite possibly caused undue damage to the company's reputation and it is probable that it could have led to financial loss as well. So in the end, even though the truth came out, it was still tying its shoes while the lie jumped from one news outlet to other and was read by many. Those very same people will probably never encounter the corrected article.

For just that reason, it is very important to quickly limit the exposure of the public to a false news article. After all, once the genie is out of the lamp, it is not possible to put it back and providing a correction later can only mitigate the damage.

While having the mistaken information along with its correction below the article in order to provide transparency for the readers is fine, leaving a wrong tweet can only increase the damage because it will always be more visible and more popular.

In the end, we can say that the correction system did not function properly in this case; it was both lacking in decisiveness and haste. We must remember the three steps: Limit the exposure, release the correct information and put a correction for those who have already read it.

Lack of trust in reviewers

The public's trust for critics or reviewers seems to be waning and it is visible even in the media where we see articles that either question the problem or support a specific side, urging people not to trust the opposing side. This targeting is not limited to a single type of reviews either. Whether with film critics, book critics or – a more recent addition – video game critics, the same problem persists. Some of this distrust stems from simple differences of opinion but there is also the possible concern that critics might have a conflict of interest. To put it more simply, people think these critics might be bought.

For example let's consider food critics. Who from among the general populace can ultimately become a food writer or restaurant reviewer? What are the ethical rules these journalists must adhere to?

The answer to the first questions lies within the hierarchical management structure of a newspaper, for example. I'm sure that managers have set standards and set criterion for selecting the best candidate for the job.

Regarding the second question: They must avoid all conflict of interests and any situation that can damage their impartiality, respectability and credibility. To be more precise:

It is not ethical for a restaurant owner, partner or manager to work as a restaurant reviewer or food and beverage writer.

Those who continue to work as chefs should also avoid working as restaurant reviewers.

The articles should not be written by people who openly or confidentially work as PR representatives at a restaurant or for other companies in the food and beverage sector.

Allow me to skip right through feeble protests on how these people could act objectively or prevent their feelings more accurately causing their interests to interfere with their journalistic work. This goes against the principles of ethical journalism.

Even if we set aside the expertise facet of the issue and assume all the people who work as restaurant or locale reviewers are the foremost experts in their field, there are other issues to consider.

These reviewers must avoid freeloading tendencies. They must pay for every meal that they eat or the media organization they work for must cover the costs.

Our colleagues in this field must not accept gifts from owners of the subjects of their articles, avoid PR events and invites. They must avoid using their status to gain advantage for organizations or reservations.

Restaurant reviewers should pay attention to avoid bringing unfair competition. They must stand at an equal distance to every establishment, research properly and judge fairly when comparing them with one another.

Friendly relations with restaurant owners and managers that can cause puff pieces, must be avoided. In other words, promoting the places of people who are from our social circles while disregarding the ones owned or managed by people who are unknown to us is unacceptable.

The list can go on and on but it is clear the underlying message is actually quite similar to ethical guidelines that every journalist must follow. Simply put, hold the interests of people who you report for, not the people you report on. Advertisement in the guise of a review is not as subtle as you think it is.