Exchange of letters between editors-in-chief of Daily Sabah, Die Welt on Europe in crisis 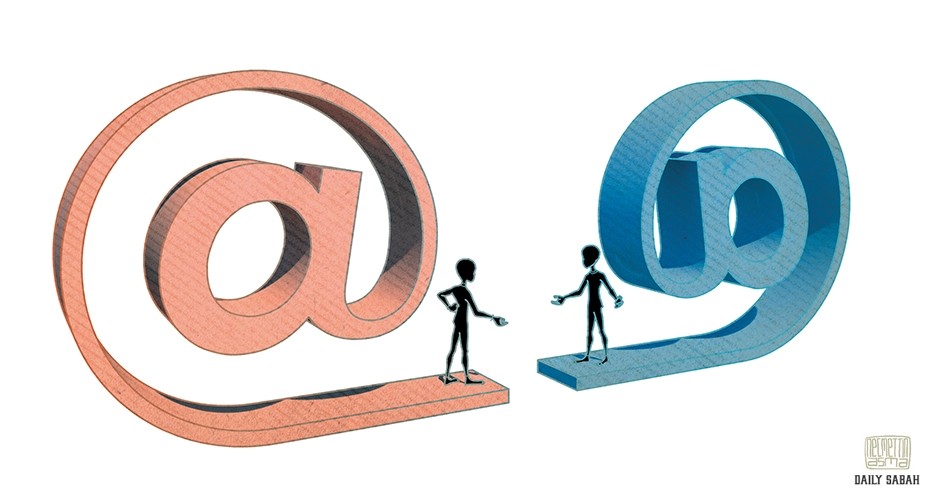 This week, instead of the usual articles you are accustomed to seeing in the Reader's Corner, we bring you the correspondence between two individuals: Daily Sabah's Editor-in-Chief Serdar Karagöz and German daily newspaper Die Welt's Editor-in-Chief Dr. Ulf Poschardt. The main concern of this correspondence is the relations between Turkey and Germany both at the state and media level

Following the detention of Die Welt reporter Deniz Yücel, Poschardt wrote an open letter to President Recep Tayyip Erdoğan this month, requesting his release. In the Daily Sabah editorial titled, "Danger of creeping fascism in Germany," published on March 8, 2017, this letter and Dr. Poschardt were mentioned in the paragraph beginning with "Dear Ulf."

"We, as Daily Sabah, can say that we read your letter and truly appreciate the feelings you expressed. If only your government's generosity of spirit toward terrorists could extend to the millions of refugees in need. You can be sure that Yücel's case will be resolved long before the friends and families of the nine Turks killed by a right-wing German terrorist group find justice. We will closely follow Yücel's case and we are certain the independent Turkish judiciary will serve justice. Daily Sabah staff often visit Germany and consequently, have first-hand knowledge of your country. Each time one of our colleagues visits your country, we ask them to bring back some of those delicious chocolates. You may praise our football teams and pickles, as we do your footballers and chocolates. However, when we take a glimpse at how you treat the core of the German national team, players of foreign background, like Mesut Özil, Jerome Boateng and Lukas Podolski and their fellow compatriots who made Germany home, we find it hard to sympathize with the emergent right-wing forces dominating German politics and society and no one has the right to ask us to do so."

The correspondence below can be considered a continuation of these editorials.

Thank you for your letter and the respectful tone of your detailed response. You address many topics on which we have frequently reported at length in DIE WELT. Our publisher, Stefan Aust, has authored the most comprehensive book on the abhorrent terrorism of the NSU group so far and he has posed acute questions to German politics on this subject. We have not spared our state and judiciary any inconvenient question. For us, this is essential to our duty as journalists.

Of course, we did not participate in the criticism of Jerome Boateng expressed by a few, very few AfD politicians. On the contrary: On page 1 of DIE WELT, I expressed my pride in the diversity of precisely this national team several times. We criticize any form of xenophobia.

DIE WELT is an independent, liberal newspaper. That is why we sent Deniz Yücel, a journalist with a critical perspective who loves Turkey, to Istanbul. My letter to the President was a reaction to the comments, or one could also say prejudgments, which labeled Deniz a terrorist before any formal trial has even started. It will come as no surprise to you that we wholly reject this accusation.

However, the far more important question is: How do we proceed? How can we, as colleagues, restart a dialogue that is free of accusations and insinuations? What can we journalists do to ensure that the political escalation on both sides does not get out of control? How can we find a way back to each other? Is there a way? What do you expect from the Germans? And what do you expect from their political leaders? What is your view of the German-Turkish community?

At times of growing tensions and alienation, I believe in freedom of speech and of thought. And I believe that dialogue can create new perspectives.
This is also why I am writing to you."

Thank you for your kind letter. Questions you listed at the end are of utmost importance. I also appreciate the concerns you feel about Deniz Yücel. It is vital to trust in the Turkish judiciary, allowing Deniz and his lawyers to respond to the accusations the best way they can. The trial should be concluded quickly, unlike the NSU trial in Germany.

You describe Die Welt as an independent, liberal newspaper. Daily Sabah is a publication that places freedom and human rights at the center of its philosophy. As representatives of the Turkish and German media, we have a lot to contribute to bilateral ties. However, before undertaking such a task, we first need to truly understand each other, without prejudice and preconditions.

Relations between our two countries are based on a deep and long history of cooperation, with strong commercial and political ties interrupted only when Germany was ruled by the Nazi regime. Thousands of German scientists fleeing the post-1933 Nazi persecution found safety in Turkey at the time, contributing immensely to the foundation of the Turkish higher learning. Over recent decades, more than three million Turks made Germany home, economically, culturally and socially enriching both countries and creating an environment that fostered friendship between the two peoples. It is no surprise that Germany was the second most supported team at football world cups, only after Turkey.

This is the rich inheritance of our forebears and I am honestly worried that this generation of German politicians is callously jeopardizing everything instead of building on it. More than three million Turks that call Germany home are terrified about the possibility of fascism raising its ugly head again. As attacks on Islam and everyone perceived as the other escalate in the center of Europe, what will happen to not only Turks but also millions elsewhere?

How can a judiciary be immune to a society swaying to waves of extremism mounting in response to geopolitical commotions? Will German law be able to protect those who are not ethnically German? What can we, as Turkish and German intellectuals, do to prevent Europe succumbing to anti-Islam populism? How can Europe's crisis of conscience, its surrender to its basest instincts, ignorance and intolerance, be countered? I would like to invite you to Istanbul to hold a joint Daily Sabah-Die Welt panel to ponder these questions further."