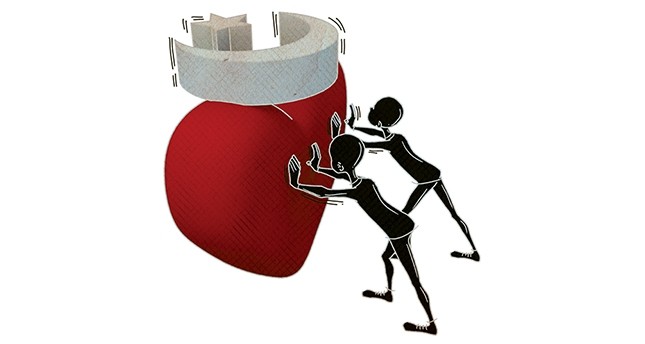 It has recently become more evident that many Western mainstream media organizations aim to push a single rhetoric as the reality of Turkey, instead of accurately depicting events. The latest controversy shows that to do this, they are willing to censor any article portraying FETÖ in a negative light

For quite a while now, many of our media organizations, journalists and political figures have been complaining about the Western media's coverage of Turkey, and the displeasure of the Turkish public. We have also mentioned incidences of false coverage, the spread of misinformation, and propaganda in numerous articles.

An article by Soner Yalçın, published in Turkish daily Sözcü on May 5, is the latest example. In his article titled, "The Guardian," Yalçın talks about a mail that was sent to Barış Pehlivan, the editor-in-chief of OdaTV, an opposition media organization in Turkey.

This mail, as indicated by the title, was from none other than The Guardian, a British daily and one of the world's major news sources. It asked Pehlivan for an article on "problems with press freedom in Turkey." He responded to The Guardian's questions towards the end of March and the newspaper published the piece on their website.﻿

The article in question also involved other names and featured Pehlivan's photo. Soner Yalçın, however, writes that none of Pehlivan's comments were present in the piece published by The Guardian and it appears that Pehlivan had written about the Gülenist Terror Group (FETÖ).

When Pehlivan objected to the censorship, the Guardian requested him to write on "pressure of the Turkish judiciary on the press," as well as "how a win for the 'yes' camp in the referendum could affect this pressure," instead.

Pehlivan, this time, asked whether his article would be published if he wrote about FETÖ and the answer was positive.

Before going on to discuss the second part of Yalçın's article and the correspondence between Pehlivan and The Guardian, let us take a step back, and analyze what we have observed so far.

Ever since the famous "Bir Dakika" (One Minute) crisis between President Recep Tayyip Erdoğan and Israeli Prime Minister Benjamin Netanyahu, some eight years ago, we have witnessed stark changes in rhetoric in Western media's coverage of Turkey and related events.

In the last few years, the media's portrayal of Turkey has become even more skewed, leaning towards manipulative speculation. We do not have to look very far to find numerous examples. Remember the July 15 coup attempt and the immediate media coverage that followed? As jets soared through the night and uncertainty blanketed the country, Western media outlets were fraught with downright false information, and manipulative discrepancies. Here are a few points to refresh your memories.

A private intelligence firm, Stratfor reported that Erdoğan had sought asylum in Germany, along with media organizations such as the Sunday Express and the Washington Post, with the latter citing flimsy, questionable sources, to suggest the president could also be headed to Tehran.

On the other hand, the Daily Beast said: "Erdogan reportedly denied asylum in Germany, now headed to London."

FOX News was not late to the party either. Retired Lt. Col. Ralph Peters appeared on FOX News' The O'Reilly Factor and gave his expert opinion, singing the praises of the terrorist junta, saying "They're against the Islamists, fundamentalists, and extremists. They're for democracy. They're for a secular constitution." And FOX News' official Twitter account said, "Lt. Col. Peters on Turkey: 'If the coup succeeds, Islamists lose and we win.'"

These are not solitary examples. The underlying problem is twofold though. First, on one side of the coin we have blatant lies, manipulations and biased reporting while on the flip side, Western media largely relies on people and sources that consistently fail to present an accurate picture of the events in Turkey.

These sources seem stuck in a district of Istanbul and fill the rest of the country according to their imaginations. Because that is the only way we can rationalize the gross misrepresentation of facts about what has been going on in Turkey for the last couple of years.

The process goes a lot like this. A foreign media organization sends a reporter to cover a story in Turkey. They hire a fixer to find local sources and act as intermediator. The fixer takes them to the people and projects a specific view that fails to resonate with the vast majority of the Turkish public. The foreign reporter writes the piece based on this input and publishes it as the preeminent mentality of all of Turkey. Then, of course, rinse and repeat.

Up to a certain point, our advice would be either to stop "parachute journalism" or find better "fixers." But, as the same mistakes are made over and over again, it is clear that Western media is indeed aware that the sources they rely on, for their articles, do not reflect the reality of the situation. The sources are all by design. They seek out sources and facts that fit well in the crannies of their preexisting rhetoric and fill in the blanks with suitable information while ignoring anything that disproves or goes against it. On rare occasions, like the night of the coup attempt, pretenses are dropped and blatant manipulation and false reporting is done. For the rest of the time, it is more veiled.

Take the terror attacks in Turkey for example. Daesh and the PKK targeted Turkey with numerous attacks in the recent years and many people lost their lives with even more being injured. However, if you expected solidarity and support, it would be in vain. Instead, the Western media decided to blame Turkey in these attacks, listed numerous supposed reasons or faults in their coverage, with an underlying tone of "they had it coming."

If you need a more tangible example, just check the Daily Sabah article titled, "Blaming the Victim," published back on Jan. 9 in the Reader's Corner. It talks about an article by Robert Fisk, published in the Independent. Here is an excerpt from our own article, summarizing Fisk's approach to the Ortaköy attack at the Reina nightclub on Jan. 2:

"The unapologetic tone of the article well summarizes the intent behind it. One would expect that at least some of the blame for the attack would fall on the attackers, but it seems that the sole culprit behind the attack and the cause of the disinterested attitude of Western media is Turkey, according to Fisk. There is a bit of lip service to possible underlying racist factors but this is quickly overlooked and the burden of the blame is put on Turkey's shoulders."

Daesh is mentioned three times in the article, each reference of which is used to point out Turkey's supposed faults in the attack. Let's look at the first one:

Now, let us return to the Soner Yalçın article to find out the remainder of the story. Barış Pehlivan's second article for The Guardian included bits on how the FETÖ-linked officers were behind the July 15 coup attempt along with their involvement in the judiciary. After the article was sent to The Guardian, it asked about sources on how the FETÖ infiltrated the state organizations along with "corrections" about the parts on July 15 coup attempt.

According to Yalçın, they wanted the article to say that "Gülenist officers were blamed in haste." Yalçın also emphasized that even though The Guardian had no problems taking the criticism of President Erdoğan and the Justice and Development Party (AK Party) at face value, they had no qualms in creating difficulties when it came to implicating Gülenists.

In return, Pehlivan wrote The Guardian about his expertise on the matter and said, "This is the real Turkey I observe and live in." The Guardian, however, continued to ask further corrections on the bits about FETÖ, such as calling the actions of Fethullah Gülen "misconduct," while urging Pehlivan to use more cautious wording when it comes to links between FETÖ and the July 15 coup bid. Pehlivan's response was to withdraw his article by saying that "he didn't want his name on an article that didn't reflect his thoughts."

Yalçın's article not only showcases the truth of every point we have made above but also reinforces that Western media is not bowled over by the realities of parachute journalism, rather they are perfectly aware of the situation. They merely don't want to publish the truth, since the facts contradict their long-crafted rhetoric on Turkey. While they continue to blame Turkey for "media censorship," they do the same in order to continue their manipulative reporting.