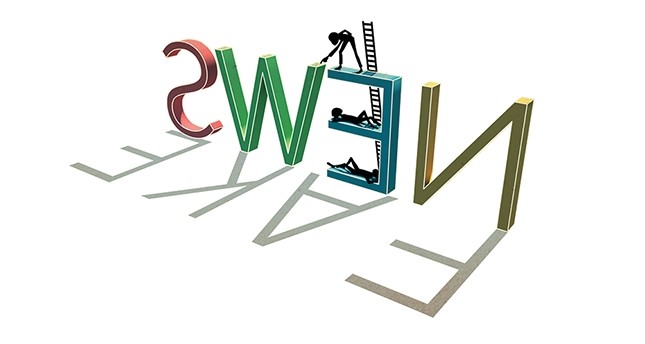 When combatting fake news, a major part of the responsibility lies within the readers as they can be both the victim and responsible for spreading the fabricated news, but they can put a stop to that by improving media literacy

Ever since the controversial presidential elections in the U.S., fake news has fallen in the crosshairs of various organizations. Regardless of the claims that fake news contributed to Donald Trump's win and the validity of such claims, the media along with its readers have reached a consensus regarding the damaging effects of this age-old propaganda tool that has been tailored for modern mediums such as social media.

Despite having identified the culprit, the blame game continues unabated, with one side being more to blame for its role as the enabler. Is it the reader who fails to recognize fake news? Or, is it the media that has driven millions to search for alternatives to the mainstream informational sources that have seemingly failed to keep up with the times? Is social media itself a culprit; generating slow, ineffective responses that do little to curb the effectiveness of fake news? Perhaps the states are to blame for failing to prevent the current situation with laws or regulations. Regardless of which argument is correct, there are always two sides to every story; not without counter-arguments to every argument.

Perhaps we are simply waiting for social media companies or state lawmakers to solve this mess for us. And by us, I mean journalists and the reader.

This week, let us look at the situation from the reader's perspective and focus on the possible measures to be taken by the media in the coming weeks. What can the reader do when faced with fake news?

To find the answer to that question, we have to take a look at the rate of awareness surrounding the problem first. A study conducted by the Pew Research Center in December 2016 revealed that 64 percent of all adults in the U.S. were, at the time, supporting claims that fake news caused confusion regarding basic facts surrounding current events. It is important to note that, in this particular case, "fake news" referred to entirely fabricated news stories rather than faulty pieces of legitimate information provided by reputable media sources.

The main avenue to pursue is clearly to increase this number while backing it up with actual media literacy. After all, what gives fake news stories the traction they need is the level of sharing on social media, done by unsuspecting readers who share it online. Readers must equip themselves with a critical eye for ferreting out the truth.

For that purpose, Teen Vogue collaborated with Rebecca Pitts who has worked for years with organizations including Rockefeller Archive Center, the Boston Public Library and the John F. Kennedy Presidential Library and Museum, presenting guidelines for improving media literacy among readers. Equipped with several simple but important questions, readers can largely differentiate between genuine and fake news, and quell lies from the truth.

Here are the guidelines from Rebecca Pitts that were published back on April 26 in Teen Vogue:

'How did you get the article?'

"Was the article or video forwarded to you? Did a friend or relative share it on social media? What journalist Andy Revkin writes in this post on Medium is telling: "Try to trace how information moves." A social share doesn't qualify an article as inherently true or false - you'll need to dig a little deeper to find out where it was originally published, who wrote it, the evidence that's presented to support an idea, and whether that evidence has links to credible data."

With a simple question regarding the origin of information, a large swath of fake news becomes apparent as many of these fabricated pieces of information come from visibly questionable sources and offer information that is both untraceable and untrustworthy.

'What was your response when you saw it?'

"Fake or extremely biased, agenda-driven news is often meant to incite - the more upset, fearful, or vindicated you feel, the more likely you are to click through the information."

In another words, the intense feeling you get while reading the news is a good indicator that the propaganda piece is possibly designed to play on those emotions. This will also compel you to click it and share it with goals of vindication or protest.

"Who profits from you reading the article? First, look up the name of the website or media company that published the piece. If you're not familiar with the mission of the company or the organization, can you find this information fairly easily? Does it seem like the organization or company supports a very specific and narrow agenda?"

These are all legitimate questions that will improve your media literacy greatly, especially considering that they will not only assist you in identifying fake news that has propaganda purposes but also in the traditional media's news articles as well. It is no secret that many of the conventional media sites put out sponsored content and even though they are usually marked for, finding out advertisement disguised as unsubstantial puff pieces will improve the reader's experience.

'Have you checked your bias?'

Sarah Murphy, the head librarian at the Browning School in New York City, told Teen Vogue that "Fake news cannot simply be news with which you don't agree." We can more easily find out or deduce status of a fake news article if the article in question is promoting something we stand against. Our disbelief, supported by our possible bias, works in our favor here, making us more suspicious of the new input that is contradictory of our existing views. However, if the situation is opposite and the fake news in question vindicates our views, we are less likely to recognize it for what it is as we do not see a reason for digging deeper. Therefore, we must play the devil's advocate at times.

'Have you checked with others?'

"Cross-referencing is crucial. How are other publications reporting on this news? Is there a general consensus among respected outlets? It's crucial to consider who is being interviewed and used as a source. Is he or she someone whose expertise is relevant to the story? Are a variety of viewpoints being considered?"

Considering that fake news usually includes scandalous news designed to shake the readers, it is important to crosscheck information against other sources. While fake news tends to come apart at the seams when faced with scrutiny, if the fake news in question sounds "too good to be true," from our political viewpoint, it often is.

These are some of the steps a reader can take to identify and put a stop to the distribution of fake news. This is one of those cases where failing to become a part of the solution could lead to becoming a part of the problem. After all, according to the Pew research we mentioned early on, one in four U.S. adults have admitted that they have shared fake news. Considering their friends and acquaintances on social media, exposure rate increases dramatically. Also, 14 percent of those who admitted to sharing political news stories online said that they did so despite knowing the story was fabricated.

Thus, all the guidelines and media literacy in the world will not help if you willfully ignore it in application. However, for the remaining majority, media literacy is a skill that can be gained and it will help you throughout your life beyond the confines of the current debate surrounding fake news.

Letter from our reader

Earlier this month, we received a letter of complaint from an anonymous reader on the article titled, "Hacked emails show UAE ambassador gloating about alleged role in Turkey coup attempt," published on June 3. Although the letter was addressed and answered by our web team, for the sake of transparency, we are publishing the letter and our editor's response in the Reader's Corner as well:

"Zeyneb Varol's article found at https://www.dailysabah.com/diplomacy/2017/06/03/hacked-emails-of-uae-ambassador-to-us-reveal-alleged-role-in-turkey-coup-attempt is entirely incorrect and takes an incorrect translation as a basis [for misinformation]. What kind of journalism is this?"

I also read Intercept's article along with the email cited as a source. It appears that Varol did not read the email or if she did indeed read it, she did not understand it or, if she did understand it, then she has wrongful intent here. In the [email] Hannah does not say, "We are the ones who staged the coup, it's even in newspapers." So how and why did Varol write the article indicating such?

The email mentioned in the Intercept has the FDD's Hannah jokingly saying something like "An average Turkish publication depicted us as the co-conspirators of the coup attempt, I felt proud." That is quite different than saying that "we planned the coup." In other words, the situation is not as the Daily Sabah writer claims. This is really bad journalism.

In short, a newspaper in Turkey claimed that they are behind the coup. And Hannah directed this to the embassy, then you come along reporting that they planned the coup together. The original source of the news mentioned in the email is Turkey!!! This is a Big Lebowski-like situation. What a shame."

Here is the response written by our web editor Zeyneb Varol:

"The piece mentioned by our reader that was published in Daily Sabah does not necessarily indicate that the UAE had a role in the coup attempt. It is true that there is a difference between gloating about an alleged role and actually being involved in it.

However, as a journalist, it is quite hard to ignore such an exchange between Yousef Al-Otaiba, the United Arab Emirates' ambassador to the United States and FDD senior counselor John Hannah. Taking the issue lightly and considering it as petty chatter only, in which Hannah is "honored to be in the UAE's company" against the Turkish state, might cause us to miss the bigger picture, especially after the reports about the UAE's alleged financing of the attempt.

In conclusion, as Daily Sabah, we do not claim that there is credible information that the UAE was behind the July 15, 2016 coup attempt or played a role in it. But, the leak reveals an important side of the UAE's foreign politics and its intentions about the countries which the Gulf state has been calling "ally" in the region."