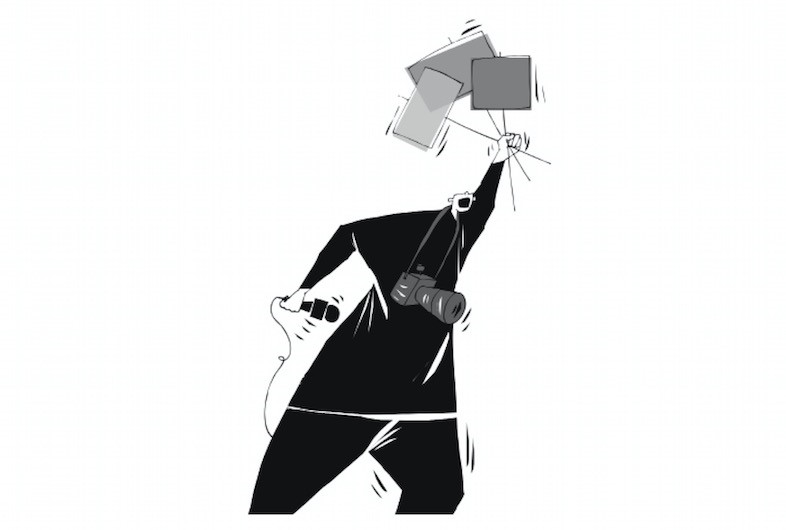 To be forewarned is to be well-equipped and, in the case of natural disasters, a major part of the responsibility of informing the public falls on the media because otherwise, catastrophic results are bound to repeat themselves in Istanbul

Everything was so sudden. All was done and over in half an hour, as the people of the city started to pick up the pieces. First, the light of day was replaced with darkness, and clouds covered the sky as far as the eye could see. Then, hail started with intense fury to be replaced by equally destructive rain. Local streets were flooded nearly in the blink of an eye.

People got hurt, trees toppled and retaining walls crumbled. Car windshields were cracked and broken under the weight of hail, while the hoods of vehicles had sizable dents. Some houses were flooded, while others saw extensive damage to their exteriors. Roofs crumbled or flew away with the wind just as the windows were broken. Roads were closed, and with traffic unable to move, cars were left stranded in flooded streets. Motorcyclists sought high ground under overpasses. There was mass chaos. This was Istanbul on July 27, right around 6:00 p.m. Most of the city's population was unprepared. Yet, the rain clouds made their way to the country from the Thrace region a couple of hours before covering the skies of Istanbul. What was about to happen was already a reality in western parts of Thrace. But our Istanbul-centered media organizations glanced out their windows to their plazas and saw the sun still shining. Thus, they took their default action of things happening outside of İstanbul. They ignored it with only couple lines in a news article or a sub header in a news program.

Therefore, the majority of readers and viewers were unaware of the warning and upcoming disaster. Moreover, when the storm crippled Istanbul and moved on to Çanakkale, media organizations maintained their nonchalance.

This is a subject that needs consideration beyond just the recent disaster and its response. It is a case of coldhearted negligence, offending selfishness and destructive egocentrism that has been going on for a long, long time.

Those who are familiar with the history of Istanbul know that in different time periods, destructive storms visited the city multiple times, uprooting the trees of Kağıthane and dragging them to the Bosporus as floods caused the city great damage. In the last decade, we saw many similar disasters in Western and Eastern countries with numerous lives lost.

Although the recent disaster was not on the same scale as previous ones, it was also one that many Istanbul citizens had never seen before in the city. It was an unprecedented event for many people of the younger demographic.

As the water receded, the fog was dispelled and as the damage was laid bare with loss assessments, criticism followed, of course. Urban development, the municipality and environmentalism were the main three themes of the majority of the said criticism. There were also many arguments regarding preventive actions and questions concerning the efficiency of rescue operations.﻿

We leave these to the experts of related fields. Instead we look at the media aspect of the subject. In this regard, social media was filled with criticism concerning the lack of warning. Some accused official agencies of negligence, while others stated that the media failed to do its primary job.

After I investigated the situation and actions of several agencies, I saw that the Directorate General of Meteorology made an official statement on the morning of the day to warn citizens. The statement said: "Showers and thunder showers are expected in Trakya, Istanbul and its surrounding regions along with the northern provinces of Çanakkale. Therefore, caution and precaution is required to prevent flash floods, flooding, lightning strikes, local hail, gusts during showers and disruption of transportation."

I would like to emphasize the "flash floods" and "local hail" according to the statement. It is clear that the Directorate General of Meteorology predicted the possibilities that could arise and shared them with the general public. News agencies also reported on them throughout the day.Many media organizations reported on the directorate's report with a news article, while some news programs largely announced it with a sub-header. However, can we say that the media did its duty on July 17 in regard to the disaster? Unfortunately, we cannot. Before the disaster struck, all media organizations should have been on high alert, while continuously reporting on the situation as it developed via news websites and TV channels until they could be reasonably sure that the necessary message reached everyone in its vicinity.

I understand that we are talking about an aberrant, sudden event. Perhaps its destructive force was underestimated. But, these are not valid excuses. There are no guarantees that similar disasters will be prevented in İstanbul or other cities in Turkey in the future. When the subject matter is human lives and the health of society, every indicator and possibility must be on the table, and news on the subject must take precedence. Only then will readers and viewers prepare and take precautions against an coming disaster, thus resulting in lesser damage.

Another thing to point out here is that while news websites were reporting on the developing disaster, they also found themselves in the shoes of the boy that cried wolf in a way. With the insistent tendency to embellish and exaggerate in their news articles, many readers chalked the recent stories up as another attempt at garnering clicks. This combined with click bait headlines, which give a sense of urgency but fail to convey any substance to the story, led readers to simply ignore the warnings. It is important to remember this lesson when it comes to sensationalism in journalism. After all, when a real disaster strikes, the media needs credibility and that cannot happen when all credibility has been spent pursuing ad revenues and click count beforehand.

Our media organizations have finally found an acceptable level when it comes to reporting on heavy snowfall in the last couple of years. I hope that similar reflexes will emerge in the wake of the recent disaster. We already failed once, and the only recourse left is to learn our lesson from that failure.

On Aug. 2, we received an email from the Corporate Communications Directorate of Anadolu Agency (AA) requesting a correction. In Daily Sabah's article published on July 25, "Documentary film festival to bring Turkic world together," AA was listed as one of the companies that supported the organization mentioned in the article.

The email from AA stated:

"… As Anadolu Agency, we state that our company is not among the organizations that sponsored the event and request that the name of Anadolu Agency be removed from the news article. We kindly request the necessary action with our best regards."
Following the email and confirmation, our web team removed the false information regarding the news agency posthaste. We thank AA for bringing this matter to our attention.