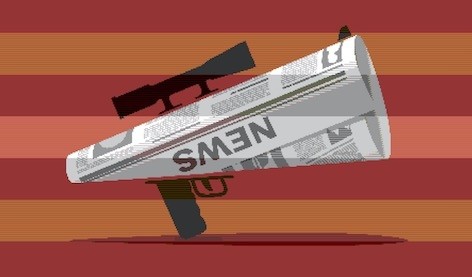 Last month Reuters Institute for the Study of Journalism released their new report titled Digital News Report 2018. It has several key findings that closely relate to the number of topics we approached on this corner. We also draw numbers from the organization's report last year titled Digital News Report 2017. Just comparing the two reports on the topics shows the transformation of our media, be it mainstream or social.

There is a section especially concerning today's subject but first let us examine a few bullet points. Covering 37 countries around the globe, the report seems to be showing, for the first time, an end point for the continued rise of social media when it comes to being considered as a source of news. It is not surprising however. Considering the fake news phenomena and the reaction to it throughout the past year, it seems that people are more apprehensive when it comes to news they cannot verify or trust.

For example, Facebook went from 42 percent in 2016 to 36 percent when it comes to the number of people that used the site for news. While some of that is due to the waning popularity of Facebook, there is an overall trend in several countries such as United States and Brazil who approach news on social media with a more critical eye. Turkey for example went from 54 percent to 51 percent since 2017 when it comes to the number of people who used Facebook as a news source.

Nevertheless, a triple rise in WhatsApp usage for the same reason since 2014 shows us that while trust in Facebook is shaken, it does not spell doom for all social media. Turkey's usage increased 5 points to 30 percent when it comes to WhatsApp.

Fake news was also one of the main topics of the report with numerous statistics showing the current state. Across all countries, 54 percent said they were quite concerned about what is real and not when it comes to news on the internet. Turkey is even higher than the global average as 60 percent expressed concern on this matter according to the report. The highest percentage belonged to Brazil with 85 percent, with a considerable margin considering the next on the list, Portugal, sits at 71 percent.

Surprisingly it is our neighbors who closely follow us in this category with 44 percent, tied with Malaysia. There are only two other countries over 40 percent and they are Mexico and Hungary.

When every other person encounters fake news on a weekly basis, how can we expect trust in the media, social or otherwise, to rise? And these are considering no fake news goes unnoticed and people realize that it's fake rather. Not to mention that even if the truth surfaces after a while, every piece of fake news that people are exposed to causes enough to damage on their perception of reality.

So, it should be no surprise that 68 percent think that the state should do more when it comes to differentiating between what is the truth and what is fake when it comes to news in Turkey. The global average was at 61 percent. On the other hand, 71 percent think that the lion's share of responsibility falls on tech companies and believe it should be their jobs to police news content in regard to their truthfulness. The number was even higher for media companies at 75 percent. At the very least, an overwhelming majority agree that something should be done when it comes to fake news regardless of the source.

Now let's examine an example from the previous week and ponder the possibly disastrous results of fake news that was shared over social media in Turkey.

If you recall, last week we focused on a story of a puppy with all of his feet cut off in our article titled, "Responsible journalism at work". The original story caused great outrage in the country; many people on social media added their voices to the call for better laws for animal rights. The government, opposition parties and their respective candidates for presidency all echoed the sentiment in the face of this great campaign.

In that article we also mentioned that media organizations have been focusing on similar stories for quite some time, drawing attention to this problem in Turkey. The entire situation was a culmination of the efforts of these editors and animal rights activists, managing to galvanize the general public on the issue.

Following the initial story however, a video clip started to make its rounds on social media. It was a young person cutting the feet of a puppy. It was branded as "Syrian refugee torturing an animal." People were angry and looking for someone to blame, the assailant was still unknown at the time, but this video gave an easy target. It brought a volley of hate speech, xenophobia and racism that went far beyond condemning the act. After a while though, the video turned out to be from another country in the Middle East, as stated a week ago by the Facebook page of a nongovernmental organization from Jordan.

According to "Teyit.org" a nonprofit fact-checking organization in Turkey, this video with its fake title was shared 2,500 times from a single Facebook page, reaching over 35 thousands of people. The original video was first shared back in Aug. 9, 2016. Yet, nearly two years later, the same video was used to promote xenophobia.

While we are on the subject, the recent election marathon was also quite problematic when it came to the subject of Syrian refugees. For the first time, we saw a tremendous increase of xenophobia on both social media and the rhetoric of several candidates. It appears that while we were criticizing the increasing xenophobic tendencies of Europe and its political actors, the very same problem reared its ugly head in our country.

In this atmosphere, I am sure you can imagine the potential damage fake news stories such as this can cause. When tensions were high, and people were looking for a way to vent their frustrations at the heat of the moment after the story of the mutilated puppy broke, a supposed culprit appeared in the form of a Syrian refugee. It wouldn't matter if the Syrian refugee they encountered was personally responsible. It could have been rendering them as an acceptable target in that mindset. We could have been reading a horrible news story, a real one this time, about how a Syrian boy was killed due to the fake title of a video.

The possibility of this scenario was much higher than many of us like to believe. While this example showed an individual problem, the overall situation is just as dire. There are no shortages of events, moments or times where a provocation can rob people of their common sense, urging them to commit violent acts. Who could say that a fake news story in the future on a sensitive and urgent topic cannot cause untold damage? By the time you read this, the elections of June 24 will be concluded. Hopefully we will not see these types of provocations in the form of fake news on election night.