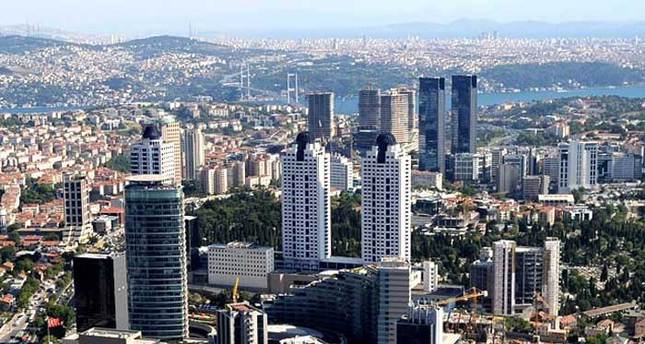 A report by the Turkish Statistical Institute on Thursday shows that the number of house sales to foreigners almost doubled in August compared to the same period last year, despite huge crises in neighboring countries

Despite the clashes and collapsing economies of neighboring countries, whose citizens used to be major real estate investors in Turkey, house sales to foreigners increased by 97 percent in August when compared to the same period last year. A total of 1,774 houses were sold to foreigners in August 2014 displaying a large contrast to the 890 sold last year, the Turkish Statistical Institute (TurkStat) announced yesterday.

The figure posed an increase of 20 percent when compared to July, 2014. In August 2014, with 591 sales, Antalya was the city with the highest number of properties sold to foreigners followed by Istanbul with 511 sales and Muğla with 133 sales.

The amount of money invested by foreigners in Turkey's real estate sector has reached $1.26 billion (TL 2.85 billion) in the first four months of the year - its highest-ever level. The Turkish Ministry of Economy has said that the rise from January to April of this year reflected a 48 percent increase on the $893 million invested during the same period last year. The number of foreign investors in Turkey increased after a bill was passed last year to remove the reciprocity law, which allows foreigners to buy property in the country on the condition that Turkish citizens are able to do the same in the buyer's country.

Additionally, restrictions on the sale of real estate to foreigners were reduced. Europeans not only come to enjoy Turkey's attractions as tourists, an increasing number of them are involved in large real estate acquisitions. Foreigners from Germany, the U.K. and Russia are known for owning a lot of Turkish coastal property in beach destinations like Antalya, Fethiye, Kemer and Bodrum.

The ministry's Foreign Direct Investment Bulletin said foreigners invested $7.9 billion during the first seven months of this year - a quarter of which was invested in real estate. A total of 12,485 foreigners of 104 different nationalities purchased 12,543 areas of land and real estate in Turkey during this year's first five months, according to the Ministry of Environment and Urban Planning - 48 percent more than last year.

Julian Walker, director at Spot Blue International Property said that his company sold at least 30 properties in Istanbul during a property fair in Dubai on behalf of developer Enyap Insaat, cementing a strong business relationship and proving a trustworthy gateway to Turkey for foreign investors. A number of large infrastructure projects will continue to stimulate the Istanbul property market in 2014, in particular on the outer limits of the European side, Walker said. "The site of Istanbul's third airport, set to be the world's largest, is there and the district will have improved links to the eastern side when the city's third bridge over the Bosporus, to the north of the center, opens.

"But arguably the largest impact on Arnavutkoy will be the construction of the Istanbul Canal, Erdoğan's most adventurous project to date, which will connect the Black Sea and the Sea of Marmara, transforming the land along its route," Walker said.

"Turkey has the advantage of attracting more Gulf investors than its European neighbors, as demonstrated by its major presence at the Cityscape exhibition held in Istanbul," Walker told the Anadolu Agency.

According to TurkStat, house sales in Turkey rose by 25 percent annually in August, breaking the half- yearly downward spiral. In August 105,624 houses were sold compared to 84,480 which were traded in the same month last year, TurkStat reported on its website, indicating a 25 percent increase in sales after a six-month-long downward trend since February. Additionally, the decline in mortgages in the past seven months halted this August. The number of mortgages given saw an annual rise of 12 percent from August 2013 with 31,559 to 35,338 this August.

House sales in Turkey were in decline since the central bank of Turkey introduced sharp interest rate hikes at the end of January in order to stop the slide in value of the Turkish Lira against foreign currencies and address the increasing current account deficit. High interest rates increased the cost of buying a home as mortgage repayments became costlier. Consequently, mortgage demand was lowered which suppressed house sales in the country.