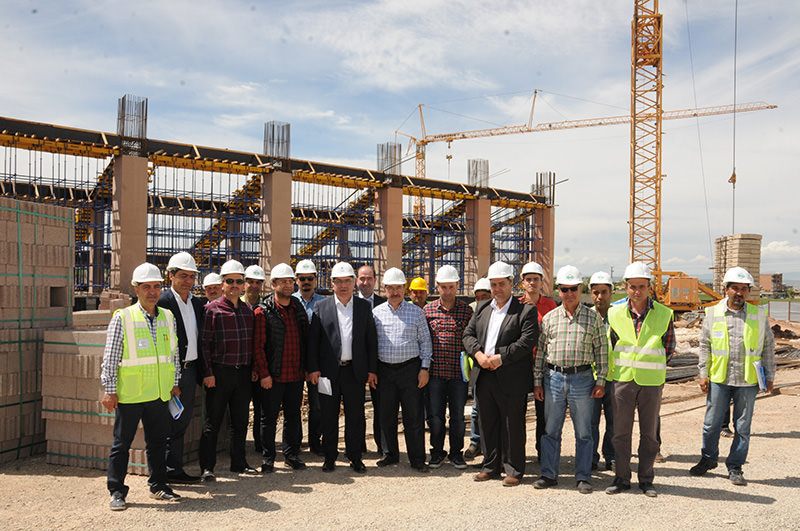 Head of TOKu0130 investigates construction sites in the southeastern province of Turkey, Batman (AA Photo)
by Anadolu Agency May 04, 2015 12:00 am
The Mass Housing Administration (TOKİ), which is under the Prime Ministry's control, is expanding its projects to the east and the southeast of the country due to the peaceful atmosphere created through the government-initiated reconciliation process.

TOKİ President Mehmet Ergün Turan said with the advent of peace in the previously out of bounds regions of the country due to the reconciliation process had allowed TOKİ to enter previously unsafe markets. Many citizens who had moved to bigger cities desired to own homes in their hometowns and TOKİ was there to ensure that, he said.

Turan, who was in Batman inspecting the 15,000-people-capacity stadium and the 300-people-capacity maternal ward along with other mass housing projects in the province, said the whole of the east and the southeast of the country was like a building site, with the construction of a huge stadium continuing in Diyarbakır. Batman's stadium would have a poll next to it, he said.

"The peaceful atmosphere created due to the reconciliation process will result in huge projects in the entire region. With peace, I believe people will no longer migrate to large cities. Because people want to live in this beautiful region in their hometowns. And we want to tap into that potential."

TOKİ's duty was to ensure people became home owners in installments equal or even less than rent, he said. "TOKİ's primary duty is to allow poor families to become home owners. 650,000 citizens are currently living in TOKİ homes. In the past year, we offered two-bedroom homes with a one-time deposit between TL 6,000 ($2,211) to 8,000 followed by TL 230 to TL 480 monthly instalments. Our customers in Batman will start paying off their homes once they move in. This reflects the social state mentality we have," he said.
Last Update: May 04, 2015 4:40 pm
RELATED TOPICS