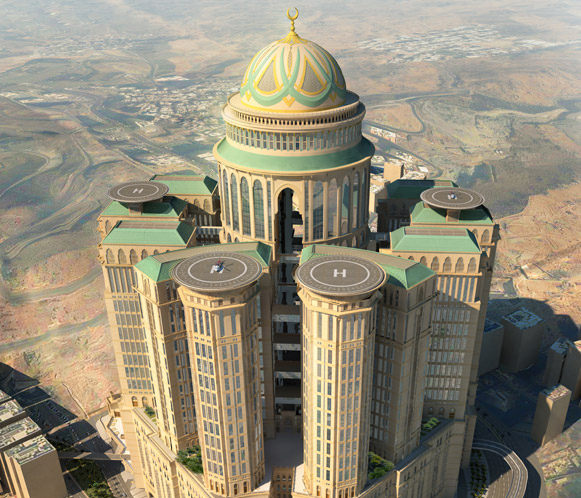 by Daily Sabah May 25, 2015 12:00 am
Saudi Arabia has announced that they will open the biggest hotel in the world, with a capacity of ten thousand bedrooms, in the holy city of Mecca in 2017, according to The Guardian.

According to the initial plan, the 5-stars hotel will have 10,000 bedrooms, 70 restaurants, a conference room, shopping malls, food courts, and a bus station, in addition to five floors for the exclusive use of the Saudi royal family.

The project which costs around 3.5 billion U.S. dollars is funded by the Saudi Ministry of Finance, to serve the Muslim pilgrims starting from 2017.

The hotel complex will be located in the Manafia district, almost a mile far from the Grand Mosque of Mecca.

This comes in combination with other expansion projects that aim to raise the capacity of the Grand Mosque of Mecca from three million to seven million pilgrims, until 2020. Every year, Mecca hosts about two million pilgrims, which provides the city with nine billion U.S. dollars income.