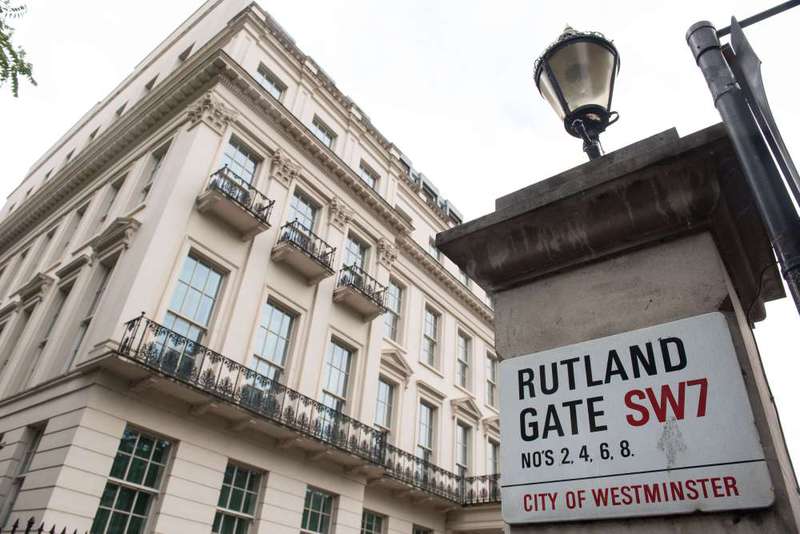 The facade of 2-8a Rutland Gate, which is thought to be the most expensive home ever marketed in Britain, in central London listed with a 300 million pound asking price.
by Daily Sabah Aug 10, 2015 12:00 am

An average of $15 billion per year will flow out of the Middle East into direct real estate globally in the near term, according to the latest research from global property advisor CBRE

The Middle Eastern investor base has expanded, fueled by weakening oil prices and has led to a major shift in global investment strategies towards greater geographic and sector diversification, with activity spreading across gateway markets to second-tier locations in Europe and the Americas, the report said according to Arabian Business.

During 2014, the Middle East continued to be one of the most important sources of cross-regional capital into the global real estate market, with $14 billion invested outside of the home region - the third largest source of capital globally.

CBRE said that London, while retaining the top position, is no longer as dominant, with a 32 percent share of all Middle East outbound investment in 2014, compared to 45 percent in 2013.

The report said Middle Eastern investors are becoming more active across a wider range of sectors. This is clearly evident in the U.S. where, historically, these investors have bought office buildings and trophy hotels in New York, Los Angeles and other gateway markets.

Competition from Chinese investors and other global capital sources means that these investors are increasingly seeking alternatives, such as Abu Dhabi Investment Authority's $725 million acquisition this year of a 14.2 million square foot industrial portfolio.

Nick Maclean, managing director, CBRE Middle East, said: "The Middle East will remain one of the most important sources of cross-regional capital in the global real estate market. The weakening of oil prices is likely to lead to the sovereign wealth funds reducing their total spend but we see strong growth in overseas investment from families and other institutions, in many cases, for the first time."

CBRE said it forecasts that global real estate investment by non-institutional capital from the Middle East will range from $6 billion to $7 billion per annum in the near-term, if not higher, increasing from approximately $5 billion per year during 2010 to 2013.

Chris Ludeman, global president, CBRE Capital Markets added: "Private capital from the Middle East is once again becoming a measurably more important investor group globally. The most immediate change will bring down the average lot size, as non-institutional investors tend to target assets at circa $50 million.

"This extends naturally to a more diverse investment strategy - a trend already felt in the market so far in 2015 and is expected to become more pronounced in the next six to 18 months. "In particular, we expect the Americas region to see more capital flows from the Middle East, with Europe less dominant than it has been over the last five years."

In addition to private capital, SWFs from the Middle East are also expected to remain important market-makers, albeit not as strong in their acquisition strategies as they would have been if oil prices had not fallen.

CBRE said it expects $7 billion to $9 billion per annum of Middle Eastern SWF investment to flow into direct global real estate in the near- to mid-term, compared to what would have otherwise been in the range of $9-$11 billion per annum had oil prices remained at levels above $100 per barrel.

"Recent signs that the Middle Eastern investor base is maturing and becoming more complex in nature are a healthy attribute not only in the context of global real estate, but also for the development of local markets in the Middle East. However, as a significant proportion of wealth accumulated in the Middle East will continue to be natural resource driven, diversification, and global diversification in particular, will be the key to Middle Eastern investors' future strategies," said Iryna Pylypchuk, Global Research, CBRE.
Last Update: Aug 10, 2015 1:48 am
RELATED TOPICS