Construction projects increasing buyers' will to settle in Turkey 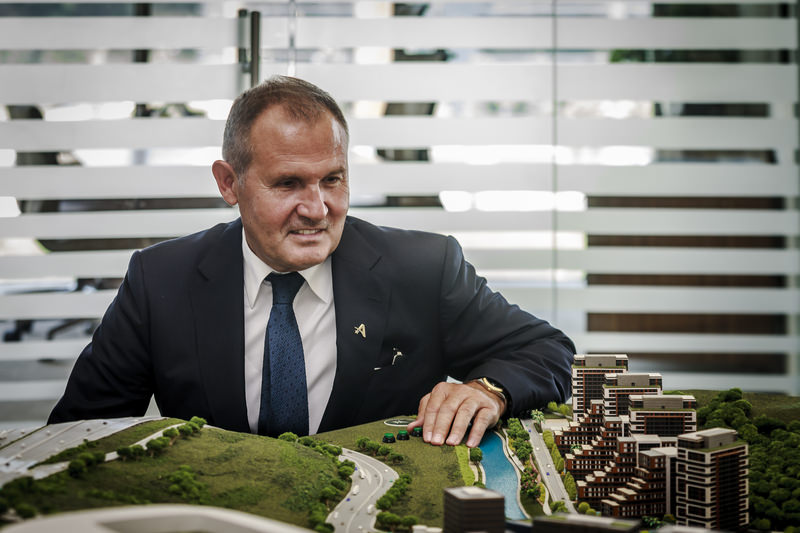 The designs of Artaş Construction make their buyers want to settle in Turkey. The company, which attracts investors from Middle Eastern and Gulf countries especially, is popular in Turkey, and it recorded the highest number of sales even during times of crisis. Artaş Chairman Süleyman Çetinsaya described the company's 38 years of experience in an exclusive interview with Daily Sabah

Daily Sabah: Artaş is known as a leading firm in the sector, it has a reputation for high sales numbers even during times of crisis. How would you describe your brand value and success in your market performance?

Süleyman Çetinsaya: We have 38 years of experience in construction and it is our only business. We stand by every building and each flat that we have constructed. This is the most important feature of a brand; in order to become one you have to trust the quality of your product.

D.S.: Let's talk a little bit on your Vadi Istanbul project that you are about to participate with in Cityscape Dubai.

Çetinsaya: Since 2012 when changes in reciprocity legislation were introduced, an important customer portfolio emerged in Middle Eastern and Gulf countries. Therefore, Cityscape Dubai has become more important for us. The project has a total area of 1,325 million square meters and is to be completed in three stages of which 650,000 square meters is for construction. Vadi Istanbul includes 2,500 residences, 300,000 square meters of office area, 100,000 square meters for a shopping mall and a five-star hotel, so it is a mixed project. It is a significant project for Istanbul and its surrounding region, that's why we wanted to display our project for investors in Cityscape Dubai. This project will be linked to Istanbul's metro system - we will undertake the construction of a short line from the shopping mall section of our project to the Seyrantepe station. New roads both for the project and for transit purposes will also be constructed.

D.S.: Cityscape Dubai has been organized since 2002. How many times have you attended Cityscape, and could you tell us about the fair's concrete contributions to your company?

It's our fourth year in Dubai as a participant, but we also attended Cityscape Dubai as visitors in earlier years to track recent developments and projects in real estate in the region. Cityscape Dubai helps us in three ways - it attracts investors to our project, we promote our brand and our project and we also promote Istanbul. I think investors in the region should be aware that such a project is being built in Istanbul.

D.S.: How is the investor profile in Vadi Istanbul? From which countries have foreign investors chosen your project the most? Do people usually prefer your project to settle in or to invest?

Foreign residents make up an important share of all residents currently living in the first stage of our project, and most of them are from the Middle East. In general terms, people usually prefer our project to settle in.

D.S.: Your project is very well known and is in a very convenient place. We would like you to describe your own project, why should people choose Vadi Istanbul?

This project is located in the heart of Istanbul. Transportation is very easy, it is located five minutes away from Büyükdere Street (Istanbul's main commercial axis), and one can easily cross to the Asian side, as it is almost located at the western end of the Second Bosporus Bridge. It is close to Istanbul's third airport (to be inaugurated in 2018) and upscale neighborhoods like Kemerburgaz or Göktürk located in Istanbul's north. It is at the center, but Vadi Istanbul also has the calm feeling of a holiday resort as it is surrounded by forests.

We currently do not come across any legal obstacles as they were removed with the legal modification in 2012. Our people have some habits and practices like not giving up the old things and clinging to past. When we finalize our projects, people appreciate them and then give up these old habits. The concept of urban renovation and legal changes introduced in 2012 was recently understood by the public at the end of 2014. Therefore, we currently do not expect anything from the government, but we have expectations from our citizens. There should be changes in people's understanding.

There are two parts of urban renovation, one is transformation from residential areas and the other is from industrial areas. The Cendere project, a 1,900,000 square meter industrial area founded in the 1950s, is moving away and the area is being transformed while industries located in the area are renovating their own technology. We are only a 425,000 square meter part of this project. This area was a total dump three years ago, now it is becoming a planned, central residential area in the heart of Istanbul. If you move out of the city too much by asking for new construction slots or areas from the central government or local authorities, people do not easily prefer such locations with transportation, education or entertainment concerns in mind. There are many beautiful projects, some are 15 to 20 years old, but they still did not produce the expected growth so far due to location. Urban renovation projects should be our priority, and then we should seek new areas outside Istanbul.

D.S.: How would you answer why foreign investors choose Istanbul?

It is apparent, but there's really only one Istanbul, with its historical and cultural sites and natural beauty. There are many people from the Middle East or Azerbaijan who want to have a permanent residence in Istanbul although they do not spend their entire time in Turkey, while many others invest in and relocate to Istanbul. The real estate business is also profitable. For example, a residence bought for $500,000 now costs $700,000, and values of investments also increase on a dollar basis. Many projects were done in Dubai despite its small population, but they manage to receive interest from the region and surrounding countries. This is because there is a sense of freedom in Dubai. Each state has its own laws and regulations, it is natural, but the expected freedom and liberty is present in Istanbul. This is one of the major reasons for choosing Istanbul.

D.S.: You earlier mentioned the changes and its positive effects in reciprocity legislation. However, sector representatives and customers still complain about several problems in real estate purchases by foreign nationals. Do you think there are still problems in that regard? Is it necessary for further simplification of bureaucratic procedures?

We can only apply once and obtain preliminary permission for the whole project from the military as the law foresees military consent for national security purposes. Other than that, foreign nationals can conduct their procedures in land registry offices just like we do. At first there were some problems, but now they are resolved. A foreign national can obtain a deed only three days after purchase.
Last Update: Sep 09, 2015 12:58 pm
RELATED TOPICS