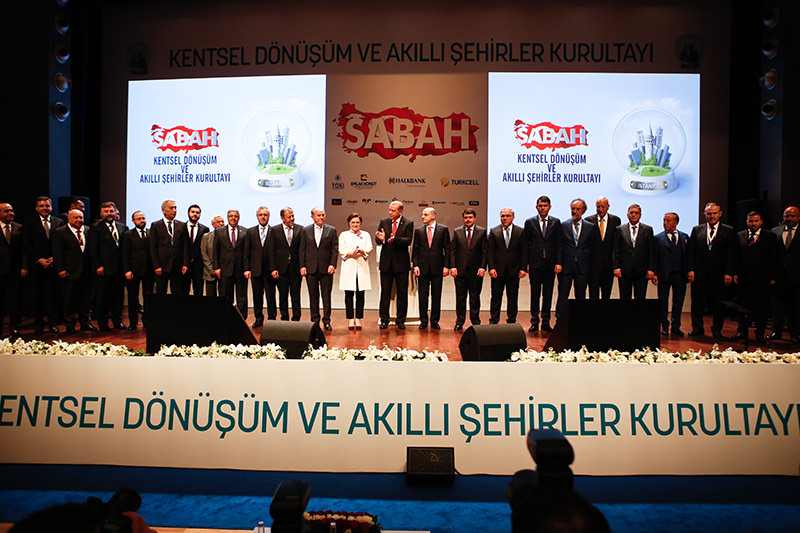 Organized at Istanbul's Haliç Congress Center, the Sabah daily brought together critical figures in the urban transformation process which began in 2012 and is expected to contribute $400 billion to the economy

Giants of the construction sector united at the Urban Transformation and Smart Cities Assembly organized by Sabah newspaper at the Istanbul Haliç Congress Center to discuss the transformation of Istanbul with the participation of President Recep Tayyip Erdoğan on Monday.

Sabah brought together leading figures involved in the urban transformation process that began in 2012 and will contribute $400 billion to the economy. The first stop of the assembly, which is taking place in six different cities, was at the Istanbul Haliç Congress Center.

During the assembly, the rules that sector players needed to mind from horizontal architecture to smart cities and local motifs to contemporary techniques were discussed. Considering the issue, Erdoğan said: "It is time to move on from vertical to horizontal structures. Regarding the projects, especially outside cities, people should unite with more land and green." These remarks were reiterated at the assembly by panels.

Saying that while they were trying to bind up the wounds of the citizenry, some parts were trying to deepen these wounds, Environment and Urbanization Minister Fatma Güldemet Sarı added: "There have been attempts to move all the decisions we have made in order to eliminate the victimization of people living in the area in another direction. It is not possible to understand the criticism of those who did not say a word yesterday for the homes demolished by terror toward our construction and reclamation work in the area today. We know very well what to do."

Indicating the importance of enriching the projects with local motifs, Sarı said: "We will increase the aesthetics of the cities with the projects in horizontal architecture by staying loyal to local motifs such as pool houses in Kastamonu, flat-roofed houses in Urfa and oriel houses in Amasya." Sarı said that they have moved to a new understanding of urbanization, and smart cities will be built. Speaking about this understanding in which less energy and water are consumed, bicycle roads integrate cities, transportation problems are solved with public transportation and the foundation for an ecological city is laid, Sarı said: "We will build clean, environmentalist and smart cities that reduce emissions along with construction materials, recycled household waste, transportation systems and energy production and consumption. Smart cities will not only consume, but produce while consuming."

Housing Development Administration (TOKİ) President Mehmet Ergün Turan said that TOKİ has moved forward to building 710,000 residences over the last three years from an administration that built 43,000 residences in 19 years. "We determined our goal for 2023 as 1.2 million residences. This year's goal is to build 60,000 social housing residences, excluding our participating companies," Turan said, adding that while construction expenses around the world increased 4 percent at the nominal level, Turkey reached TL 131 billion ($46.34 billion) with a 7 percent increase. Indicating that the construction sector's share in the national domestic product is currently 5.6 percent, Turan said that housing sales in Turkey reached 1.3 million with an 11 percent increase in 2015, which is an all-time record. According to Turan, foreign investors' interest in the sector continued, and in 2015 23,000 residential properties were sold to the foreigners totaling nearly $5 billion.

Turan said that while many cities are at great risk from natural disasters and unplanned urbanization, they have been conducting active urban transformation work on 129 projects in 49 cities with 112 municipalities covering some 55 million square meters. In addition, they are working on large-scale housing areas, planning a new city with a capacity for 55,000 people like Gaziantep, and they started construction along with 3,000 residential properties. 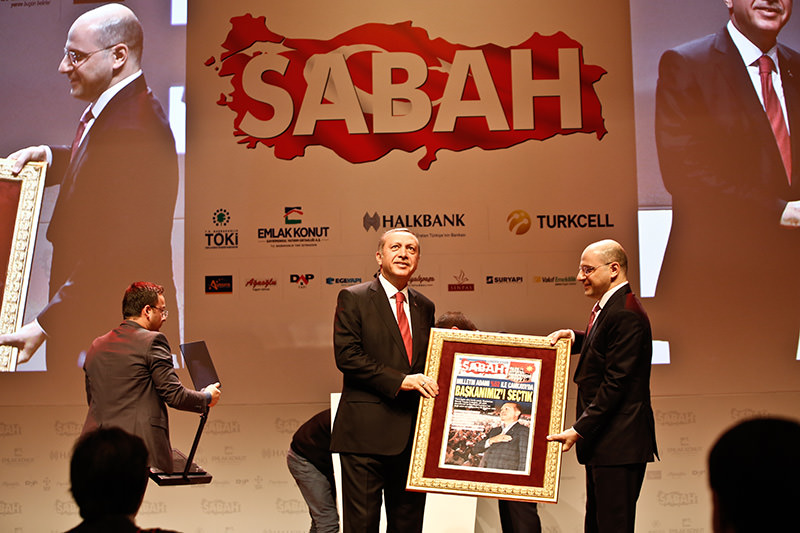 Also speaking at the assembly, Erdoğan addressed the mega projects in Istanbul. Asserting that Kanal Istanbul project would raise awareness along with buildings befitting Istanbul's dignity, which would be built on both sides of the canal, Erdoğan said that the project would be completed regardless of doubtful statements.

According to Erdoğan, for the Marmaray project, it was said that it could not be done in the past, but it has been open for the past three years carrying more than 130 million passengers. Stressing that the Eurasia Tunnel would also be completed at the end of this year, and while Istanbulites and people around the world have passed through with the railway, Erdoğan said that now people would pass through the Bosporus in their own vehicles. Indicating that all of these projects have been conducted to achieve a comfortable transportation network in Istanbul, Erdoğan said that when the Yavuz Sultan Selim Bridge is completed on Aug. 26, heavy vehicles will pass over it rather than the first and second bridges over the Bosporus by facilitating transportation in Istanbul.

"In the past, due to the lack of sufficiently improved land and the excessive demand toward city centers, the need for high-rise buildings was reasonable, but it is time to move on from vertical to horizontal structures," Erdoğan said, adding that the new projects need to be more people-oriented.

According to Erdoğan, people's expectations from cities have changed in line with the increase in the level of prosperity, and vertical buildings should not be allowed around Kanal Istanbul. After discussing the issue with environment and the environment and urbanization minister and transportation minister, Erdoğan said that horizontal structures would add a new style and beauty to the Kanal Istanbul project. Indicating that these steps need to be taken in Ankara and other cities, Erdoğan said that the 30- to 40-story buildings rising in the middle of empty fields dozens of kilometers away from downtowns is not acceptable.

Stressing that people needed to have a close relationship with the land, greenery and the environment when going away from the city, Erdoğan said: "Smart cities do not mean high-rise buildings. On the other hand, I think that regarding the new urbanization projects, pedestrian-oriented projects should be prepared."

According to Erdoğan, city centers have been invaded by buildings and vehicles, allowing no place for people, and sometimes even the sidewalk are invaded by buses. Citing the importance of people in the urbanization process, Erdoğan said opportunities should be created for people such as sidewalks and bicycle roads, giving Konya as an example due to its successful roads for bicycles.

Erdoğan said historical values should be preserved while renewing and making cities more intelligent and old cities such as Istanbul, Ankara, Bursa and Gaziantep should be preserved. "It is not enough just to preserve, we need to keep the fundamental architectural characteristics of these cities alive in new art works as well." Erdoğan said, indicating that during his terms as prime minister and president he was persistent for the projects to be designed compatible to Seljuk and Ottoman architectural styles, giving the Presidential Palace as an example with its three fundamental aspects of Seljuk, Ottoman and smart architecture.

Explaining that when the Süleymaniye and Selimiye Mosques are considered, Mimar Sinan can be seen in their architecture, Erdoğan said that he has been showing efforts for this sensitivity to be taken into consideration regarding projects in places such as schools, courthouses and hospitals and he will keep doing so.