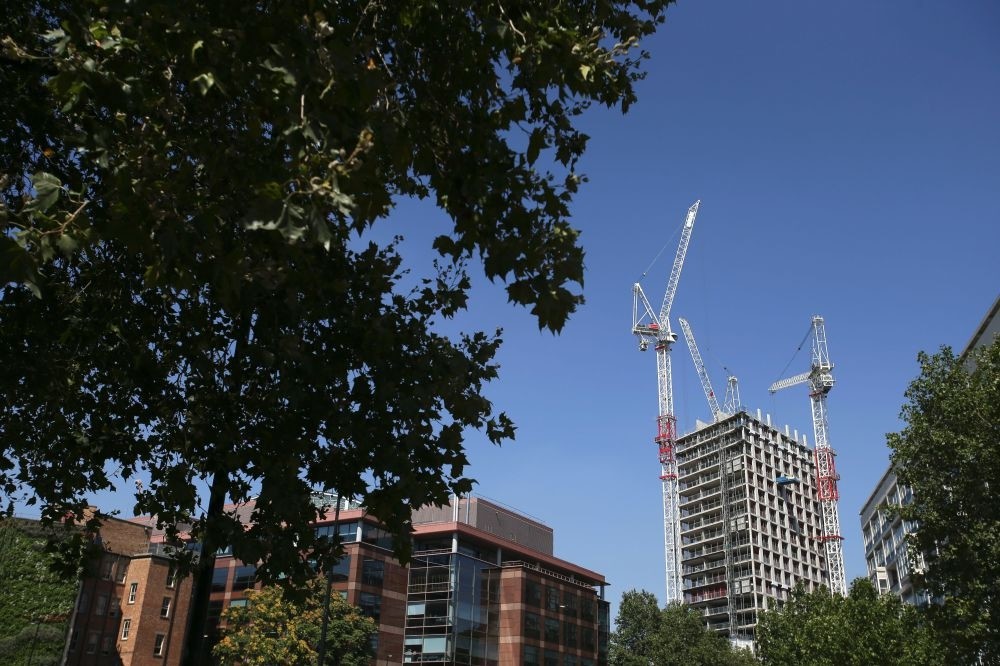 A picture shows cranes next to a block of flats under development in London on August 17.
by reuters Aug 26, 2016 12:00 am
Britain's vote to leave the European Union will have a negative impact on both prices and turnover in the UK housing market, with foreign investors set to benefit most from bargains among sterling-priced assets, a Reuters poll found.

However, British house prices - a bedrock of consumer wealth- will still rise 2.8 percent this year, 1.3 percent next and 2.4 percent in 2018, according to the poll of 24 economists, estate agents and brokers taken in the past week.

London prices will be up 2 percent this year, not rise at all next year and then rise 2 percent in 2018.

"Short-term uncertainty and a weaker economy look set to put a dampener on turnover over much of the next 12 months," Investec chief economist Philip Shaw said.

"But demographics remain a positive driver, banks remain open for business and we envisage slower (economic growth) rather than a collapse."

Nearly all respondents said Britain's pending departure from the EU - the details of which have yet to be thrashed out - would hurt house prices as well as turnover, which matters more for housing's contribution to the overall economy. The latest survey results were several percentage points weaker in the coming years versus forecasts based on a "Remain" vote in a poll taken before the referendum.

Property was one of the hardest hit sectors after the result of the vote, with shares in the biggest builders and estate agents plunging in the immediate aftermath and investors pulling out of commercial property funds, leading to some suspensions.

But, on Tuesday, Persimmon reported a jump in reservations by buyers of new homes over the last two months.

Just over a third of respondents have penciled in a fall in house prices next year, but those falls were quite tame compared to the heady rises seen during the boom years.

Investors have been snapping up London property for nearly two decades, making huge capital gains on soaring prices, and now that sterling has fallen by more than 10 percent, investment properties look that much cheaper for new foreign buyers.

They were overwhelmingly picked by respondents to the poll as the most likely to benefit from Brexit.

"Foreign buyers will benefit not only from steadier house prices but also from the chance to buy at a lower sterling exchange rate," ADM Investor Services' Stephen Lewis said.

Nearly every economist, as well as many politicians, said before the referendum that the housing market would slump, or at best flatline, in the aftermath of a vote to leave.

Yet home ownership remains out of reach for many. The average asking price for a home dipped 1 percent to 304,222 pounds ($402,455) this month, according to property website Rightmove, but that is over 11 times the average British salary. And, although borrowing costs are at a record low, British banks approved the fewest mortgages in a year in the month following the referendum, data showed on Wednesday.

London homes were still overwhelmingly rated as expensive, with a median of 8 on a scale of one to 10 ranging from cheap to very expensive. Nationally, house prices were rated 6. "Despite a slowdown in the rate of house price inflation, the house price to earnings ratio remains around 5.5 times against a long term average of 4.25 times," Building Value property consultancy Tony Williams said.
RELATED TOPICS