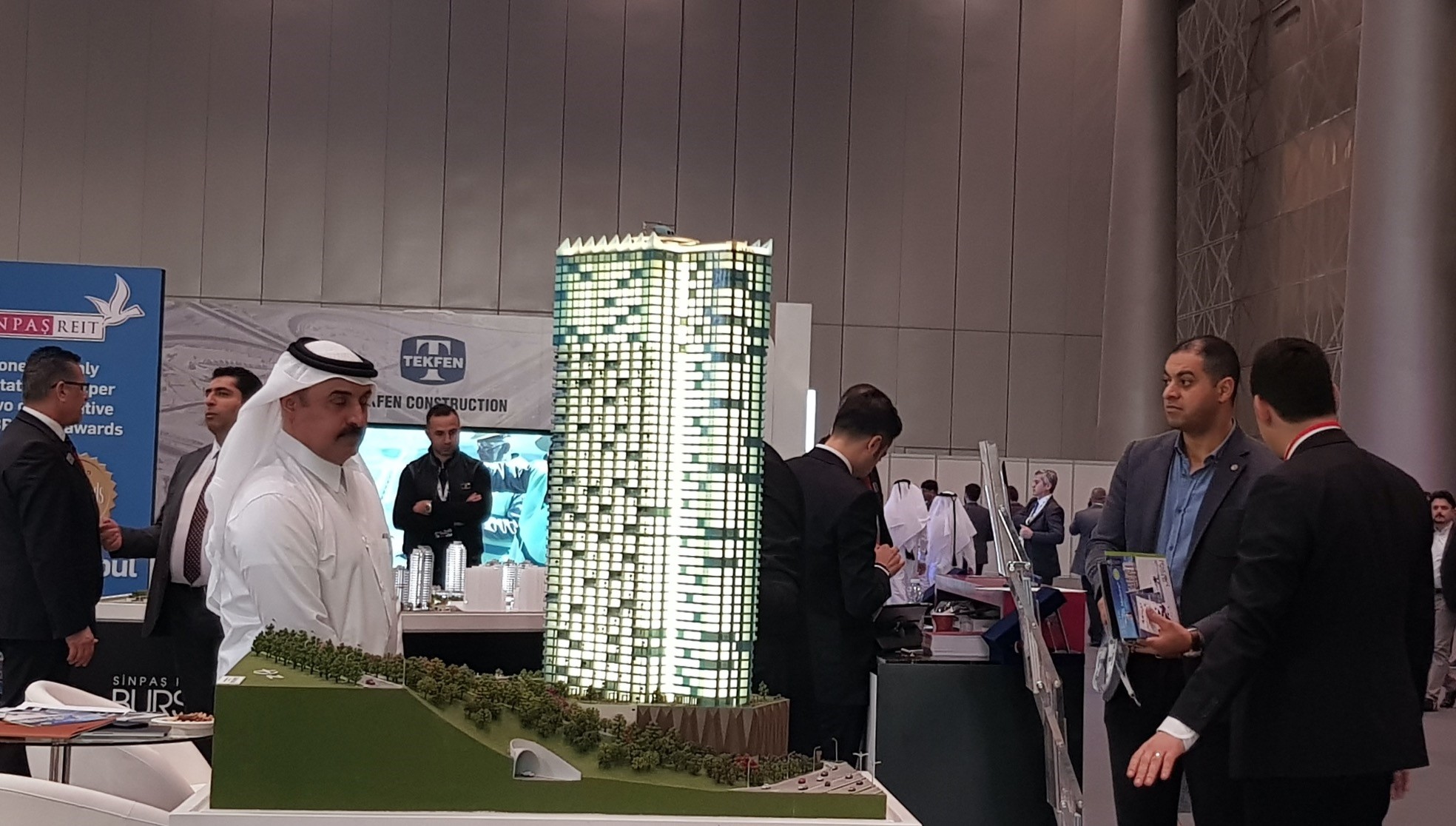 Leading real estate representatives said at the Expo Turkey by Qatar in Doha that pulling the $1 million investment limit down for foreign buyers to acquire citizenship will more and more boost the sales and revive the sector.
by daily sabah
Jan 23, 2018 12:00 am

Urged by the significant increase in house sales since the introduction of the reciprocity law in 2012 and the amendment to the law offering citizenship to foreigners who buy real estate worth at least $1 million, real estate players are now calling on the government to reduce the limit, emphasizing that it will boost sales to foreign investors

In 2012, Parliament broadened the concept of reciprocity for foreign citizens who want to buy real estate in the country. Hailed by sector representatives, the introduction of the reciprocity law was later supported by an amendment to the citizenship law in January 2017. The amendment offers citizenship to foreigners via four types of investment choices, including a real estate investment of $1 million or more. This concept of economic citizenship has contributed to the increasing real estate sales to foreigners in 2017, representatives of leading real estate providers have emphasized as housing sales statistics demonstrated a rising curve throughout the year. However, the sector emphatically suggests that the $1 million bar should be reduced on the grounds that it will further hike sales and foster the construction sector, which made up of more than 8 percent of Turkey's gross domestic product (GDP).

On the sidelines of the second Expo Turkey by Qatar fair, which staged a number of meetings between Turkish and Qatari investors and featured the joint determination of the sides to strengthen commercial and economic ties with the support of Turkish and Qatari governments, businesspeople from prominent Turkish construction and real estate firms told Daily Sabah that the sector opines that lowering the $1 million real estate investment limit to acquire citizenship would further revive the sector.

When asked about the impact of the amendment in the citizenship law and reciprocity, Tekfen Gayrimenkul Deputy General Manager Emre Ülger emphasized that the citizenship law has positively impacted housing sales to foreigners, but both the sector and government actors, he said, should set a specific target and evaluate the results.

"The $1 million dollar limit is high. It's a high figure not only for us Turkish investors but also for foreign investors. But I think the authorities can review the investment limit for citizenship, and the bureaucratic procedures might be alleviated," Ülger said, underscoring his belief that a reduction of the $1 million limit will expand sales to foreigners to a significant extent.

In line with Tekfen's Ülger, Barış Ekinci, the deputy general manager of another leading contractor Sinpaş GYO, also emphasized that after the introduction of the reciprocity law in 2012, housing sales to foreigners have been facilitated on a legal basis, therefore such international fairs have become essential to participate for Turkish firms.

"Reducing the $1 million limit for real estate investments, which gives citizenship to foreigners, will certainly revive the sector. Therefore, it's urgent and important to take action in order to lower that bar," Ekinci said.

Sinpaş Deputy General Manager Ekinci also noted that the company participated in Expo Turkey by Qatar for the second time, and it is pleased with the demand from the Qatari market.

Additionally, he underscored that these fairs also make important contributions to promoting Turkey abroad and demonstrate the country's economic power.

Citing the government incentives provided for textile, manufacturing or food industries for promotional activities abroad, Ekinci emphasized the necessity for such incentives to be provided for the real estate sector, as well.

"I believe that the housing sector must also be included in the promotional incentives. If these incentives are offered for the real estate sector, I think more and more players will expand their promotion and participation in such international fairs with high returns on the sector and the country's economy," he pointed out.

Likewise, Artaş İnşaat Chairman Süleyman Çetinsaya also drew attention to the magnificent progress that the Turkish real estate sector made after the reciprocity law of 2012, and the value-added tax exemption for the foreigners who want to buy a house in Turkey for the first time.

Çetinsaya informed that sector representatives have been negotiating for the decrease of the $1 million investment limit for citizenship acquisition, but no progress has been made.

Regarding the expo, he confirmed that the company, along with other Turkish firms, participated in the fair to expand Turkey's economic and commercial ties with Qatar and highlighted that they are pleased with the demand from the Qatar.

As for the meetings with Qatari investors at the expo, Çetinsaya said, "We are conducting negotiations with our partners here. They all want to have a house in Turkey. They review our projects, some of them even wanted to buy there on the spot, and some even made a down payment. Other Qatari investors have also suggested partnerships for prospective projects."

Turkey's housing sales to foreigners have presented an upward trend since 2012, the year when the parliamentary law made it easier for foreign investors to purchase real estate in the country.