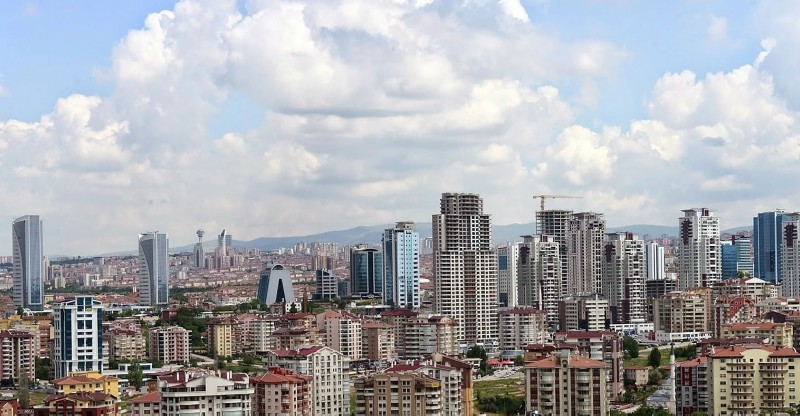 Property sales to foreign buyers hit 6,276 units in October, pointing to a 134.4 percent increase. The boost in sales was largely supported by expansive campaigns launched by the government and real estate sector as well as legislative amendments in citizenship law

For another month, Turkish housing sales to foreigners recorded a 134.4 percent increase in October compared to the same period of last year, according to data by the Turkish Statistical Institute (TurkStat). Foreigners purchased a total of 30,431 housing units in the period of January to October this year, the data of the statistical body revealed.

Under regulations that went into effect this September, foreigners who own real estate in Turkey worth a minimum $250,000 – down from $1 million – are eligible for Turkish citizenship. Some 6,276 houses were sold to foreigners, including 36 percent (or 2,283 units) in Istanbul, the country's largest city by population.

Following Istanbul, the Mediterranean holiday resort of Antalya came second with sales of 1,160 properties, while the southern Marmara province of Bursa ranked third with 448 units.

Official data showed that Iraqis topped the list of buyers in October with 1,439 properties, followed by Iranians with 557 units, Kuwaitis with 378, Germans with 341, and Russians with 336 properties.

Moreover, the number of residential properties sold in Turkey soared 19.2 percent annually in October, the TurkStat report said yesterday. A total of 146,536 units of houses were sold in Turkey in this period.

Housing sales in Turkey saw declines in August and September with a 12.5 percent and 9.2 percent decrease, respectively, compared to the same period last year. The deductions in value-added tax and discounts on title deed fees revived the market in October.

He said easing the requirements for foreigners to acquire Turkish citizenship had helped spur sales.

Tavukçuoğlu added that the number of properties sold to Germans, British and Swedes spiked sharply on an annual basis in October – up 222 percent, 131 percent, and 137 percent, respectively – thanks to the "recovery in tourism" this summer.

As for the above-expectations surge in sales, Maya pointed to other factors in addition to the real estate campaigns and reduction of citizenship limits. The campaign for the deduction of value-added tax and discount on title deed fees had previously been announced to cease on Oct. 31. Those who wanted to benefit from these reductions had to have completed their title deed procedures in October. Therefore, the surge in the sales resulted in historic highs.

In a bid to boost property sales, the government lowered value-added tax from 18 percent to 8 percent and title deed fees to 3 percent from 4 percent. Treasury and Finance Minister Berat Albayrak announced the renewal of the campaign on Oct. 31, extending it to the end of year.

Leading real estate firms also launched a comprehensive campaign that lasted from Aug. 31 to Oct. 31 to increase their sales. The campaign included an interest rate support for real estate loans, discount on prices and eased down payment conditions.

Association of Housing Developers and Investors Association (KONUTDER) Chair and Sur Yapı Chair Altan Elmas evaluated the housing sales to foreigners and drew attention to the consecutive records of the sector.

Elmas said that the sector will generate $6 billion from housing sales to foreigners and eyes to reach $10 billion next year. He noted that providing Eximbank loans for the real estate sector and supporting overseas promotion activities will certainly further reinforce the sector, raising sales to foreign buyers.

The İNDER chairman said the sector's aim is to reach $15 billion in sales to foreigners and this target could be more easily achieved if housing sales to foreigners are categorized as exports and appropriate loans are provided for the sector. He also highlighted that the reduction of citizenship limit to $250,000 from $1 million in September has been an important trigger in fueling foreign purchases.

The Turkish government reduced the limits for foreigners to acquire Turkish citizenship to encourage investment, according to new regulations published in the country's Official Gazette on Sept. 19.

Accordingly, foreigners who own real estate in Turkey worth a minimum $250,000, instead of a previous limit of $1 million, can now avail Turkish citizenship. Turkey's housing sales to foreigners have presented an upward trend since 2012, the year when parliamentary law made it easier for foreign investors to purchase real estate in the country.

Even though the amendment which offered citizenship to foreigners via four types of investment choices, including a real estate investment of $1 million had contributed to increasing real estate sales to foreigners last year, the representatives of leading real estate providers on a number of occasions emphatically suggested that the $1 million bar should be reduced on the grounds that it will further encourage sales and foster growth in the construction sector.