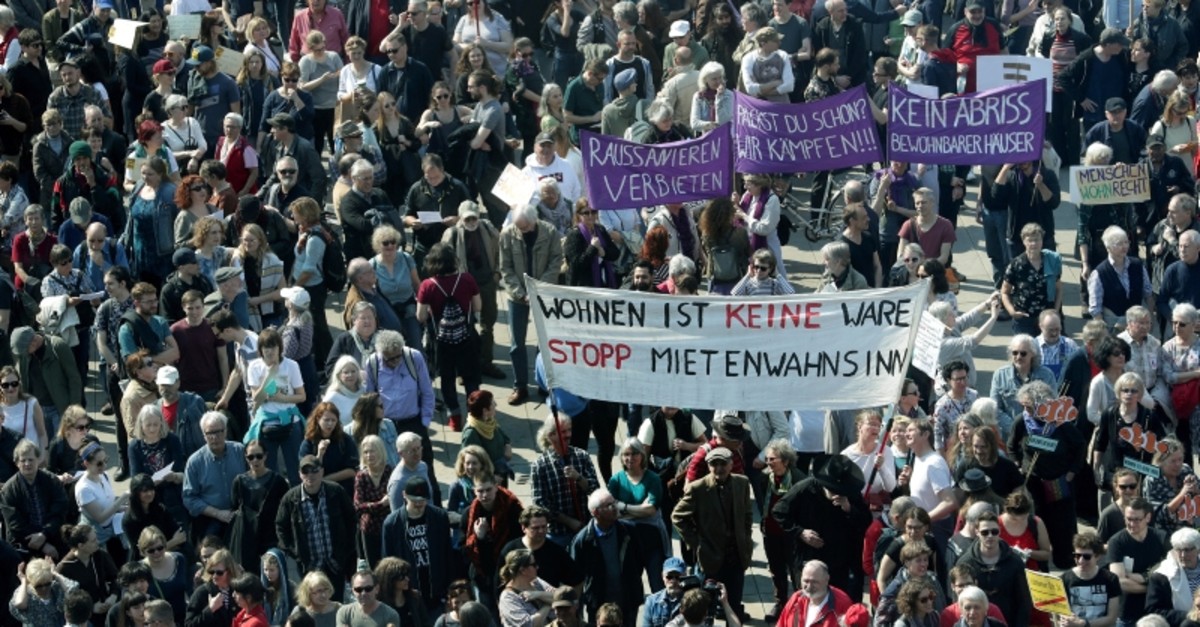 Thousands of people Saturday joined marches across major German cities against "rental insanity" or Mietwahnsinn, which has sparked a popular backlash.

Organizers said at least 6,000 people gathered in Berlin's emblematic Alexanderplatz and were marching towards the working-class, predominantly immigrant district of Kreuzberg, which has been recently targeted by developers eager to make a fast buck.

"No demolition of habitable houses," the protesters cried. Some of the marchers were disguised as what they called "real estate sharks."

The protesters also launched a signature campaign to press for a local referendum for Berlin's city hall to expropriate properties of real estate companies possessing more than 3,000 apartments.

The Berlin march went through several districts notorious for residents being priced out of their flats.

Protesters were carrying placards with slogans such as "Having a home is a basic right," and denouncing people being forced out of their neighborhoods by "Mietenwahnsinn" or "rent price madness."

Smaller demonstrations and protests took place in other German cities such as Munich, Cologne and Dresden. The protest organizers spoke of demonstrations in 19 cities with 55,000 participants.

In Berlin, organizers began collecting signatures for a petition for a referendum on the expropriation of housing companies. The initiators are demanding that companies with more than 3,000 dwellings be taken over for public benefit.

"People are queueing and signing the whole time," said a woman from the initiative supporting the petition.

If the move is successful, Berlin - which is also one of Germany's federal states - would then be obliged to buy these apartments.

The difference in cost between privately and publicly owned houses in Germany has grown in recent years.

Private housing was on average 0.70 euros ($0.80) per square meter more expensive than publicly owned housing in 2013, but in 2017 it was 1.30 euros more expensive, according to the German Economic Institute (IW).

According to estimates by the Berlin Senate, buying the private apartments would cost the already highly indebted state more than 30 billion euros ($33.6 billion). The petition is not, however, legally binding for Berlin lawmakers.

Michael Zahn, the head of Deutsche Wohnen - Berlin's biggest private housing company and a particular target of the protesters - described the accommodation situation in Berlin as "very tight."

He said the debate had, however, become "very populist and ideological."

Average rental prices for Deutsche Wohnen homes increased in Berlin by 3.6 percent over the past year. Existing tenants were paying on average 6.70 euros for basic rent without utility costs, while new tenants were being asked for 9.08 euros, according to the firm's figures released in March.

Politicians on both sides of the debate have weighed in on the protest, with liberal FDP party leader Christian Lindner saying the organizers were exploiting the issue to advocate for "a failed socialist experiment."