Fulfilling a pilgrimage to Hajj 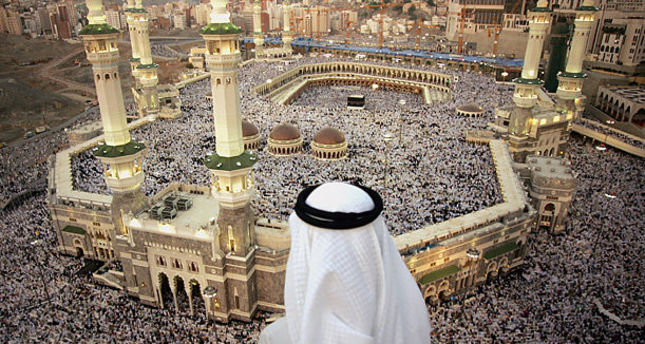 by AA Oct 04, 2014 12:00 am
Nearly 3 million Muslims are currently in the holy land as they complete the hajj pilgrimage this weekend. A number of the pilgrims, including 61,300 Turkish pilgrims who went to holy lands for hajj this year, will have reached the top of Mount Arafat before waqfa yesterday.

Muslim pilgrims, after wearing ihram in their hotels, went to the region near Arafat on buses where pilgrims expressed their happiness to be in Mecca chanting "Labbayk Allahumma labbayk, labbayka la sharika laka labbayk" (My God, here I am at your service, you are the one and only). Muslim pilgrims spent the night reading Quran and praying in their tents. Later on, Turkish pilgrims followed the program organized by the Turkish Directorate of Religious Affairs after their morning prayers. Thanks to the sound system built into the tents, pilgrims easily kept up with the program. In the meantime, there was a traffic jam in the region, due to a tightening of security measures by the Saudi Arabian leadership.

Some of the pilgrims in Arafat region climbed to "Jabal ar-Rahmah" (Mount of Mercy), where Adam and Eve first met on earth and the first repentance was accepted, and prayed. The region around Jabal ar-Rahmah faced heavy congestion because people began climbing up the mountain at the first light and spent the night praying. Zeki Kartal, who went to the holy lands from the Diyarbakır province of Turkey, expressed his excitement to be on Jabal ar-Rahmah and said, "Being here is an indescribable feeling. Only people who have been here can understand what I feel." Medical personnel Aytaç Solmaz of Zonguldak said that they are performing their religious duties while trying to help pilgrims medically. "I celebrate the Eid al-Adha of my family in Zonguldak," Solmaz concluded.

This year on "Hajj Akbar," Muslim pilgrims coming from all over the world performed the Waqfa prayer. Muslims living in the different regions of the world had a chance to pray at the same time with the Muslim pilgrims in Arafat. After the night prayer, the pilgrims went to Muzdalifah and collected stones for the "Stoning of the Devil." Later on, they executed Muzdalifah Waqfa and stoned the devil in Mina.