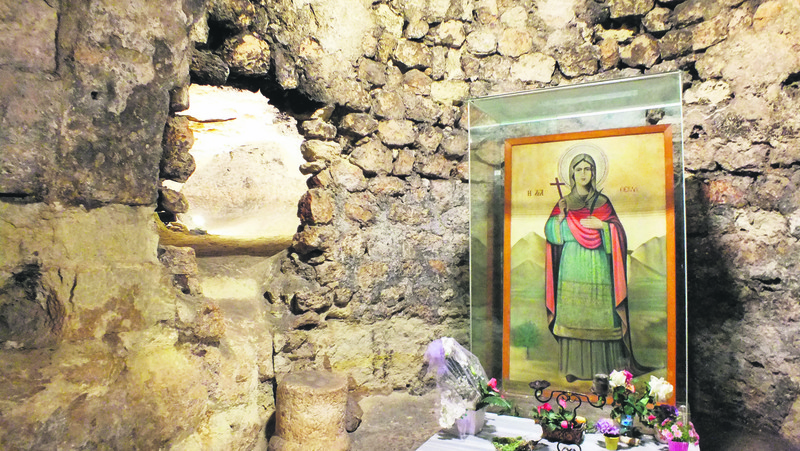 by Anadolu Agency May 18, 2015 12:00 am
Devoted to Thecla, a follower of St. Paul, who is believed to be one of the 12 apostles, the Aya Thecla Church is one of the popular religious attractions in southwestern Turkey. The church is situated to the south of Mersin's Silifke district, which draws tourists not only with its sea and beaches, but also with its natural and historic beauties such as "Cennet ve Cehennem" (Heaven and Hell) - two large sinkholes on the Taurus mountains, Astım Dilek Inn and Uzuncaburç, where the ancient city of Olba lies.

Located in an area called "Meryemlik" (Virgin Mary), the church's history dates back to St. Thecla's arrival in the present-day district of Silifke to spread Christianity. Highly influenced by St. Paul, Thecla stayed in a cave on a small hill, which she used as her secret prayer haven. In the 4th century, a church was built there.

Today, visitors climb down a set of stairs to reach the church. The ruins of city walls and cisterns surrounding the historic place make the church even more worth seeing. Speaking to an Anadolu Agency reporter, Silifke Governor Şevket Cinbir said the district has enormous potential in terms of cultural, religious and coastal tourism. He added that Silifke welcomes scores of tourists during the summer months. The Aya Thecla Church, the St. Paul Museum and Church in Tarsus and the Alahan Monastery in Mut are important religious attractions for Christians. "The church is mentioned as one of the oldest and most significant centers of Christianity. Many tourists from different countries visit each year. We expect a high number of tourists this year, too," Cinbir said. The Silifke district attracts almost 500,000 local and foreign tourists annually, he stressed. "In order to increase tourism revenues, the district's cultural and natural potential must be effectively used. The governorship prioritizes Silifke's promotion both at home and abroad. The Aya Thecla Church has an especially important role in this regard," Cinbir concluded.
Last Update: May 18, 2015 11:24 pm
RELATED TOPICS