Scandinavian Muslims to fast for 22 hours 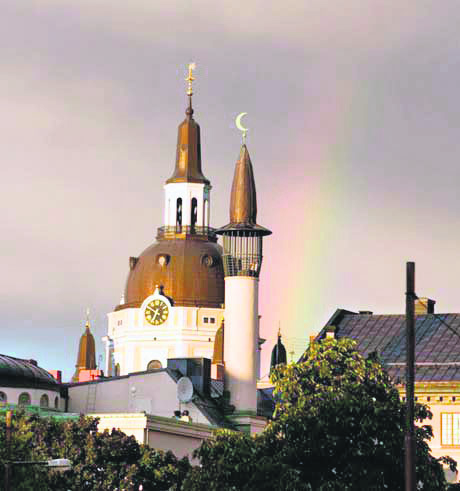 by Daily Sabah Jun 15, 2015 12:00 am
Fatih Mehmet Karaca, the counselor of social and religious affairs in Stockholm, announced that in accordance with the Ramadan timetable prepared by Turkey's Presidency of Religious Affairs (DİB), the fasting period during the upcoming month of Ramadan in Sweden's northernmost cities of Kiruna and Norway's Tromso will be around 22 hours. Additionally, Muslims living in Helsinki, Stockholm, Oslo and Copenhagen will fast for almost 20 hours, Karaca said.

Speaking to Anadolu Agency (AA), the representatives of the European Council for Fatwa and Research gathered in Stockholm to settle the timing details for iftars - the evening meal to break the fast - and sahur - the meal eaten before fasting - in a way that Muslims in Scandinavian countries can observe fasting as healthily as possible. DİB deputy head Ekrem Keleş and representatives of the DİB Higher Council attended the meeting as well. Karaca said a comprehensive guide will be prepared for the next year, which will present a detailed Ramadan timetable and prayer times for all Muslims in Scandinavian countries.

Some members of the European Council for Fatwa and Research conducted a field visit to Kiruna to observe the sunrise and sunset, Karaca said. The members shared their findings during the Stockholm meeting and a review board was established including representatives from all Muslim groups in Europe. After being assessed, the findings will be presented at the International Union of Lunar Months and Hijri Calendar Congress, Karaca said. He said the congress, organized by the DİB Higher Council, will be held in Istanbul next year. The congress will be a good opportunity to discuss different practices that have emerged due to the Hijri calendar.

Karaca said Muslims living in distant locations will observe their religious practices over the same period of time after the necessary studies are completed. A declaration will be announced to eliminate different practices concerning prayer times and the Islamic calendar for Muslims around the world. He said a specially established religious department will be responsible for this task. Karaca stressed that Muslims in certain Swedish and Norwegian cities are allowed to observe eight rakat Tarawih prayers as they fast between 20 and 22 hours each day during Ramadan. "There are rules set by the Directorate o

f Religious Affairs; however, due to their conditions, they are allowed to shorten the Tarawih prayer. Last year, a similar practice was implemented after the citizens' request," he said.

Karaca claimed fasting for long hours does not affect Muslims in Stockholm. "Muslims in Stockholm observe around a 20-hour fasting period each day. When you travel to the northern parts, the period increases to 22 hours. However, as the weather is not very hot, we do not suffer from dehydration as much and can observe fasting easily to a certain extent," Karaca said. The Religious Foundation in Sweden and the Religious Affairs Department are working hard to prepare a comprehensive Ramadan program for Muslims. "We observe Tarawih prayers together, have iftar and listen to Quranic recitations at mosques," he said.

According to the Ramadan timetable of the Directorate of Religious Affairs, Muslims living in Reykjavik, Iceland, will fast for 22 hours and 34 minutes on the first day of Ramadan, the longest fasting duration in the world. In Ushuaia, Argentina, on the other hand, Muslims have the shortest fasting period of eight hours and 57 minutes.
Last Update: Jun 15, 2015 9:45 pm
RELATED TOPICS