There should not be ‘leaders for life’ in Catholic Church, Pope says 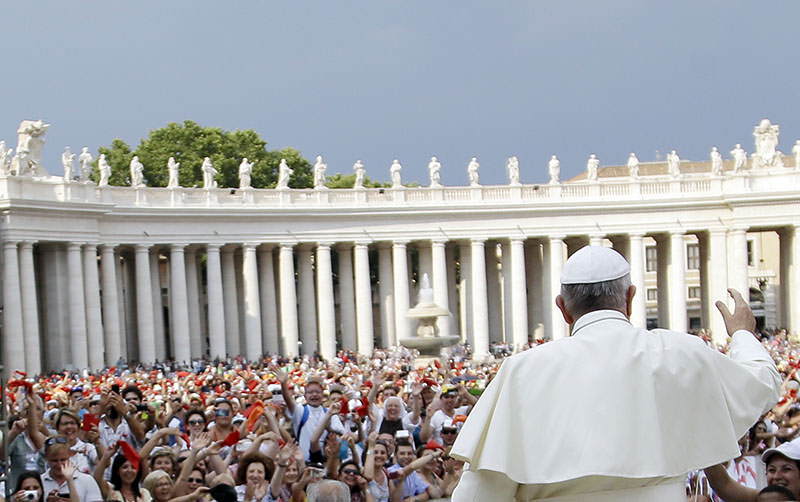 Pope Francis arrives for a meeting with faithful of the Holy Spirit movement in St. Peter's Square at the Vatican, Friday, July 3, 2015 (AP Photo)
by Jul 04, 2015 12:00 am
The Roman Catholic Church should not have "leaders for life" in its ranks, otherwise it would risk being like a country under dictatorship, Pope Francis said on Friday.

Francis, 78, has said before that he would be ready to resign instead of ruling for life if he felt he could not continue running the 1.2 billion-member Church for health or other reasons.

"Let's be clear. The only one who cannot be substituted in the Church is the Holy Spirit," the Argentinian-born pontiff said in an address to some 30,000 people at an inter-denominational rally of Christians in St. Peter's Square.

"There should be a time limit to positions (in the Church), which in reality are positions of service," he said in an address that was in part prepared and in part extemporaneous.

Making clear his comments were not confined to the clergy, Francis added: "It is convenient that all (positions) in the Church should have a time limit. There are no leaders for life in the Church. This occurs in some countries where a dictatorship exists."

In an interview with Mexican television last March, Francis said what Benedict, now known as Pope Emeritus, did "should not be considered an exception, but an institution."

But in the same interview he said he did not like the idea of an automatic retirement age for popes, for example at 80.