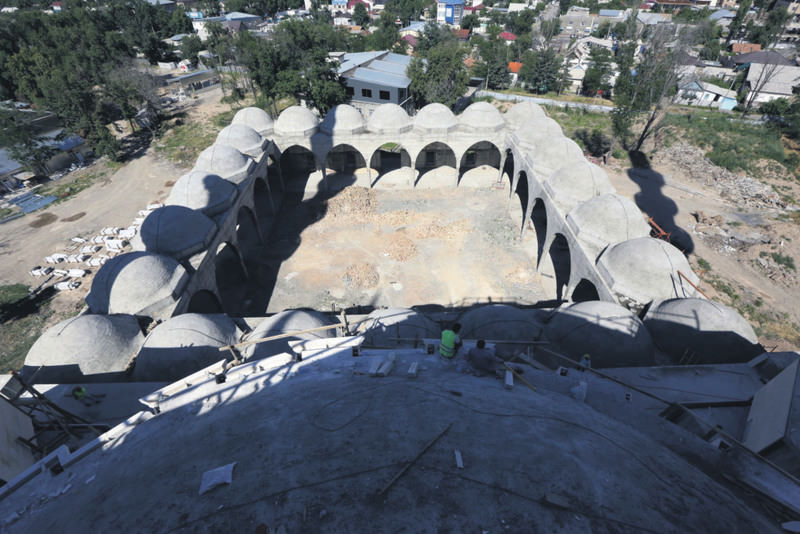 by Anadolu Agency Jul 09, 2015 12:00 am
Turkey has been building a $25-million, 6,000-capacity mosque in the Kyrgyz capital, Bishkek – the largest such place of worship in Central Asia. Bishkek Mosque's construction on a 35-acre site, has just been completed by the Religious Foundation of Turkey's Presidency of Religious Affairs, its director-general Ismail Palakoğlu told Anadolu Agency. Palakoğlu said that the mosque is being built in Ottoman style, saying they have assembled the minbar, mihrab – a semicircular praying niche showing the direction of the Holy Kaaba - and the sermon seat called "kursu" that they brought from Turkey. "This beautiful mosque will be a gift from the Turkish people to the Kyrgyz people. I believe it will contribute a lot to the spiritual life of Kyrgyzstan as the largest mosque of the country and Central Asia," he said.

The mosque has a closed area of 7,500 square meters that will enable 6,000 people to pray inside at the same time. The capacity will reach to 16,000 when open areas of the mosque are included.

Palakoğlu said that the inauguration of the mosque is planned for 2016, adding that the foundation has built a total of 3,421 mosques and educational facilities in Turkey, plus over 100 mosques across 25 countries since it was established in 1975. He added that mosque constructions were underway in nine countries, while designing efforts are taking place for 16 mosques in seven others. Palakoğlu said the latest place of worship they built abroad was the Hoca Ahmet Yesevi Mosque in Kazakhstan's Turkistan city.
Last Update: Jul 09, 2015 8:24 pm
RELATED TOPICS