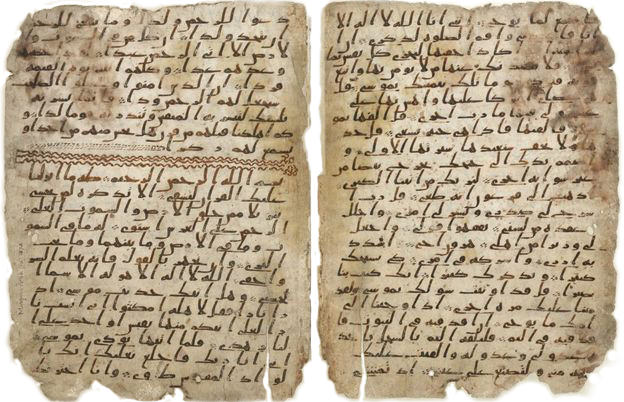 by Anadolu Agency Jul 22, 2015 12:00 am
Fragments of what is believed to be among the oldest existing copies of the Quran have been discovered far from the holy book's Arabian origins, in a university in England.

A PhD researcher from the U.K.'s University of Birmingham came across the ancient two-sheet document while examining a collection of books and other materials from the Middle East.

Now, radiocarbon analysis has dated the two written parchments found in the university's library to as far back as 1,370 years, within the founding years of Islam when the Prophet Muhammad lived.

Tests carried out at the University of Oxford revealed that the sheets were written in the Hijazi Arabic script between 568CE and 645CE, placing them among the oldest surviving Quran manuscripts.

The University of Birmingham's Professor of Christianity and Islam David Thomas said the folios "could well take us back to within a few years of the actual founding of Islam".

"The person who actually wrote it could well have known the Prophet Muhammad. He would have seen him probably; he would maybe have heard him preach. He may have known him personally -- and that really is quite a thought to conjure with," he told the BBC.

Thomas added that Quranic verses used to be written on parchment, stone, palm leaves and the shoulder blades of camels before the pages were compiled into a book in 650 and its copies were distributed by the third caliph [leader of the Muslim community], Uthman ibn Affan.

Susan Worrall, director of Special Collections of the University of Birmingham, said they were "thrilled that such an important historical document is here in Birmingham," adding that the college is planning to exhibit the Quran folios at the university's Barber Institute of Fine Arts from October 2 till October 25.