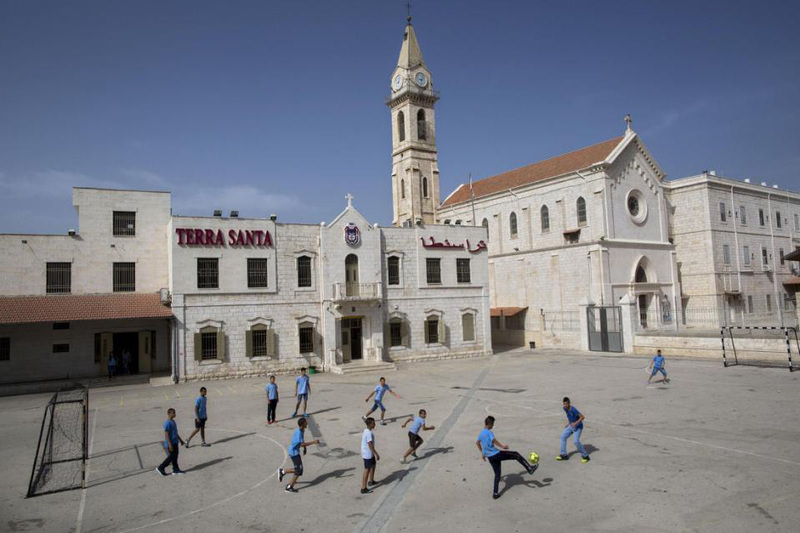 by Associated Press Sep 07, 2015 12:00 am
About 2,500 striking demonstrators gathered Sunday outside the prime minister's office in Jerusalem, police said, to protest against the slashing of funds for Christian schools. Christian school administrators accuse Israel of cutting their funding as a tactic to pressure them to join the Israeli public school system a move they say would interfere with the schools' Christian values and high academic achievements.

The vast majority of Israel's Christians are of Arab descent, and Arab lawmakers joined students, parents and principals at Sunday's demonstration, waving flags and holding banners with slogans such as "Christian schools are not for sale."

Some 33,000 students in 47 schools have been on strike since the school year began on Sept. 1. Protesters complain that Israel continues to fully fund large private school networks that cater to ultra-Orthodox Jews while it slashes the Christians' budget.

"This is discrimination and you know we pay all our dues and as citizens of this country, we are law-obeying citizens and we deserve equal rights," said Ibrahim Fakhouri, a parent from the Arab city of Nazareth.

Christians make up a small part of Israel's 20 percent Arab minority. In the birthplace of Christianity, Christians are currently less than 2 percent of the population of Israel and the Palestinian territories. There are about 150,000 Christian citizens of Israel and about 50,000 Christians spread out in east Jerusalem, the West Bank and the Gaza Strip. Although they have not experienced the violent persecution that has decimated Christian communities elsewhere in the region, the population has gradually shrunk over the decades as Christians have fled conflict or sought better opportunities abroad.

Under a longstanding arrangement, Christian schools and other private schools that manage their own affairs receive partial government funding, with the remainder of their budgets covered by either donations or tuition. The government funds cover roughly three-quarters of private schools' standard costs, but the state has been cutting back on other supplementary funding.

The protesting Christian schools say this public funding has been systematically cut in recent years to their elementary schools. To compensate, schools raised tuition fees a burden for the Arab community whose average income is generally lower than the national average. "We, all the Arab Christian schools, are demanding equality. There is no equality for our schools," said Ragheed Massad, a student from Nazareth.
Last Update: Sep 07, 2015 1:54 am
RELATED TOPICS