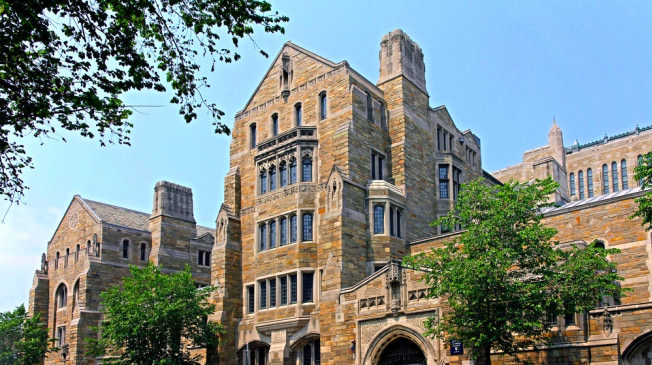 Yale University (AP Photo)
by Associated Press Sep 10, 2015 12:00 am
A Saudi businessman donated $10 million to the U.S.' Yale Law School to establish "the country's-and maybe the world's- top center" for the study of Islamic law.

Abdallah S. Kamel made the award after meetings with university representatives including Yale President Peter Salovey. Kamel, chief executive of the Dallah Albaraka Group banking and real estate enterprise in Saudi Arabia, has sponsored a lecture series on Islamic law for the last three years.

Yale officials say the Abdallah S. Kamel Center for the Study of Islamic Law and Civilization reflects a growing interest at Yale and other institutions in Islamic law, history and culture.

"The contemporary challenges of Islamic law are broadly relevant to political events throughout the entire Islamic world and those are developments that are watched by a much larger audience of people who in many cases have not much knowledge at all of the history and traditions if Islamic law," said Professor Anthony Kronman, a co-director of the center who was first introduced to Kamel by a Yale Law graduate who works as an attorney for the Saudi businessman.

For two decades, Harvard Law School has had its own Islamic legal studies program, established with support from the Saudi king.

Abdullahi An-Na'im, who teaches Islamic law at Emory Law School, said he considers the Islamic legal studies program at Harvard a disappointment because few faculty members took an interest and it has been treated as an isolated entity at the law school. He said it remains to be seen how seriously the Yale faculty will take Islamic law as a field of human jurisprudence.

Kronman said Yale aims to have the best program of its kind in the United States, if not the world, and one objective is to ensure the center's work is integrated into the life of the law school.

Islamic law, or Shariah, carries weight in the legal code of most Muslim countries. Movements to expand its influence, including in areas of the West, have been controversial in part because some interpretations have been used to justify intolerance and harsh punishments.

Kronman said Islamic law is all the more deserving of intellectual attention because many people have views of the subject that are not very well informed.

The center aims to support research fellowships, a rotation of visiting professors and a tenured professorship in the field of Islamic law.