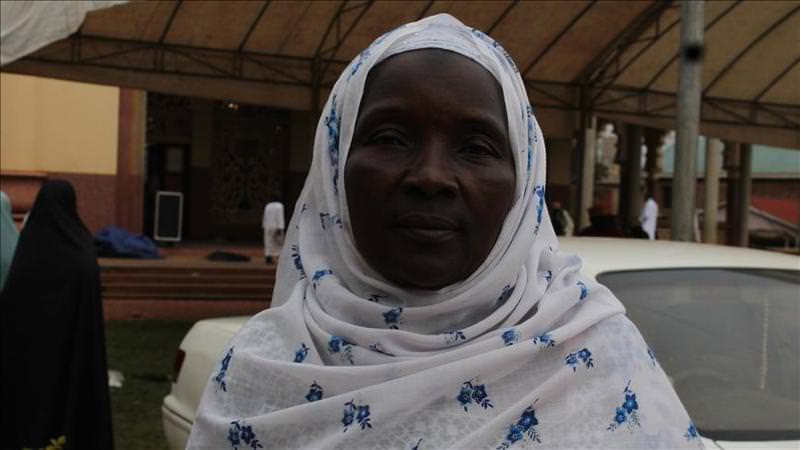 |AA Photo
by Anadolu Agency Sep 19, 2015 12:00 am
A woman from Uganda has been saving money for 10 years to be able to afford to pay for making pilgrimage in Makkah, Saudi Arabia, by working in her modest smoked fish business.

"I can't wait to get to Makkah and see Prophet Muhammad's tomb and Mount Arafat and drink Zamzam water," 58-year-old Kasifah Nankumba told Anadolu Agency. "The sheikhs have briefed us on what to expect. I'm so excited. I'm afraid I might faint."

For the last decade, Kasifah has been saving small increments of money from her modest smoked fish business, which she has run for the last 28 years in Kalerwe market near Kampala.

In 2006, Kasifah recalled, while sitting in the market, she suddenly felt compelled to perform the pilgrimage.

"But, I didn't have a penny to my name, so I pushed the thought aside," she said.

Nevertheless, shortly afterward, she got in touch with a man known for helping Muslim pilgrims travel to Makkah.

The man, known as Haji Musa, introduced her to the manager of the Mityana Hijja and Umrah Tour Agency, who advised her to start saving.

With her modest savings, they began buying U.S. dollars for her, for which they provide her with receipts.

In 2009, she heard of a man who sponsored Hajj pilgrims and immediately began looking for him.

Two days later, she was knocking on Hajji Kajumbi's door.

"I explained my dilemma to this stranger," she told Anadolu Agency. "But, unfortunately, he couldn't help me."

With her dollar receipts in her bag, she showed him what she had managed to save over the last three years.

"He prayed for me and said I should start saving more, telling me to give the tour agency amounts of between $100 and $200," she said.

From then on, she began making payments every four or five months.

On June 15, 2015, she remembers getting a call from the Hijja office manager, who told her: "Hajjati Kasifah, the money you saved is now enough for the Hijja [pilgrimage]."

"I was at the market at the time, sitting on the ground," Kasifah said. "He said my name four times, but I was too shocked to speak."

Now dancing with joy at the Wandegeya Mosque, where she attended a final travel briefing, she declared: "When I return from Makkah, God willing, I'll stay home and continue with my ibadah [prayer]; I'm not coming back to just sit on the ground and sell fish."

While 750 Ugandans are going to Makkah this year, this represents a significant decrease from previous years.

According to Sheikh Ali Juma Shiwuyo at the Uganda Muslim Supreme Council's department of Hajj and Umrah, during the 1960s and 1970s, thousands of Ugandans used to perform the pilgrimage each year.

"Late President Idi Amin Dada was very supportive; he used to send between 6,000 and 10,000 Ugandans on the pilgrimage each year," he said.

Saudi Arabia had previously allocated 1,200 slots for Ugandan pilgrims, but Shiwuyo says this figure has not been raised to match the increasing population.

Uganda plans to send 750 of its citizens – including 415 women – to this year's Hajj pilgrimage in Makkah.

Uganda's current lack of a national air carrier is also a challenge.

"During Amin's time, we had a national airline, and he would ensure there were flights to Makkah for pilgrims," Shiwuyo said.

"But now we have to negotiate with foreign airlines, and this makes it more expensive," he added.
Last Update: Sep 19, 2015 10:14 pm
RELATED TOPICS