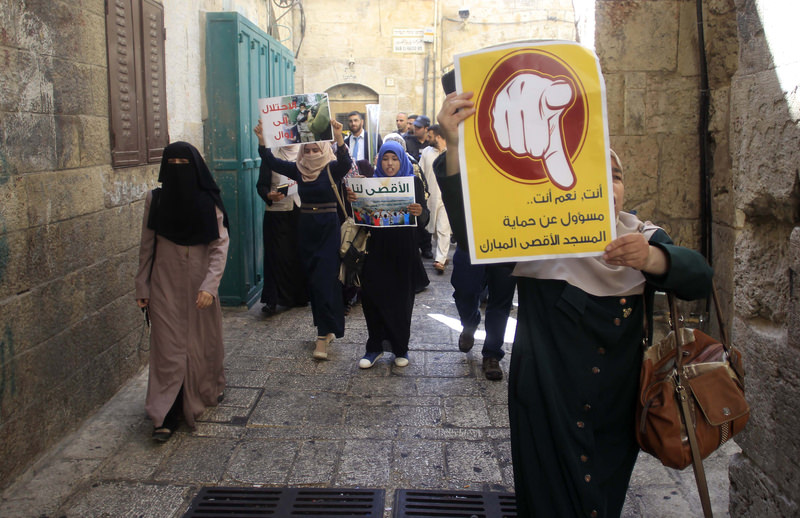 Palestinian women volunteer to protect Al-Aqsa Mosque, sacrificing time from their household and childcare duties and guarding the mosque despite attacks by Israeli soldiers

Volunteer female guards at Al-Aqsa Mosque, known as "murabit," are determined to protect the holy space regardless of Israeli attacks and daily housework. Having financial hardships, Palestinian women with small children come to the mosque every day to give the message, "Muslims will never leave the Haram al-Sharif." They did not even give up when 53 of these women were described as an illegal organization and put on a black list. 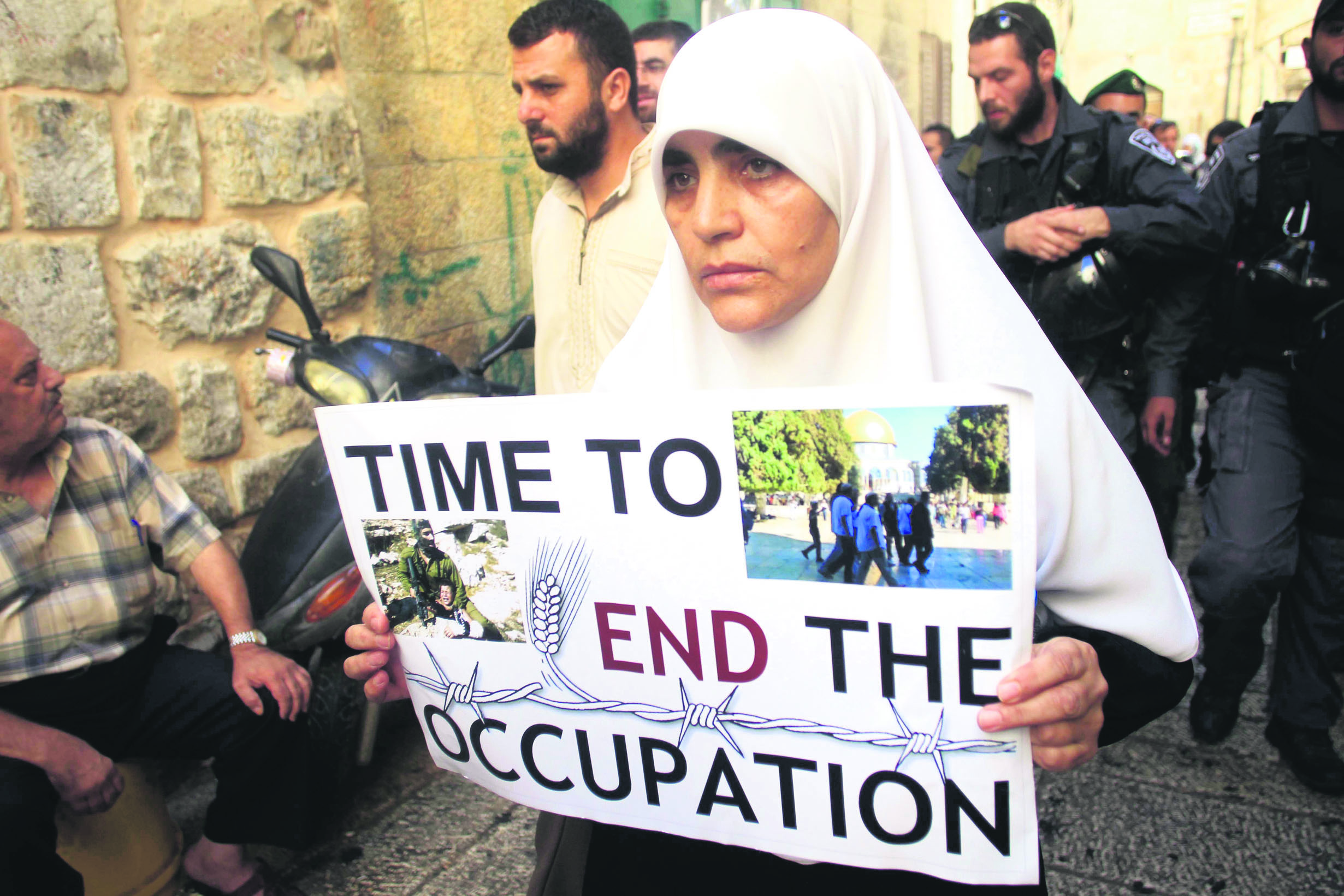 In previous weeks, 53 Palestinian women, were banned from the mosque. They are denied Access to the mosque's al-Silsila Gate.

One of them, Cihad er-Razem, 30, is a mother with four children. Razem has been arrested by Israeli soldiers three times. Speaking to an Anadolu Agency reporter, Razem said: "When I was released and went home after I was arrested the first time, I found my eight-year-old daughter, Afran, crying. She cried all day. Muaz, my four-year-old son, did not speak to me for a day. He was terribly affected." In her first arrest, Razem was forbidden to enter the Al-Aqsa Mosque for two weeks and fined 500 shekels ($127). When she was arrested a second time, she was fined 1,000 shekels and not allowed to enter the mosque for a month. In her last arrest, she again paid 1,000 shekels and was not allowed to enter the mosque for 50 days. She said that her crime was merely resisting violations against the Al-Aqsa Mosque by saying "Allahu akbar."

At first, she found it difficult to go to the mosque after she brought her children to school, but later she quite enjoyed going there. Living in a two-room house in the Silwan neighborhood in East Jerusalem, Razem said: "The love for the holy space grew both in my heart and my children's. We have hadith and tafsir courses at the mosque. I feel something will be missing if I do not go there for a single day. I feel someone will damage it." Razem does all her housework at night so that she can go to the mosque. She brings her children to school every day and then goes to the mosque. "I take my younger son Muaz with me. He takes a Quran course there. If I see a Jewish settler when I go there, I say "Allahu akbar" to show my resistance. I also take Islamic courses there," she said. "In previous weeks, 53 Palestinian women, including me, were banned from the mosque. We can never enter from the mosque's al-Silsila Gate," she added. Razem never gives up and protests until 02:30 p.m. at the door and then goes to the mosque. In the evening, she takes her children from school and returns home. "My husband supports me and wants me to protect it. My children also understand the situation," she added. 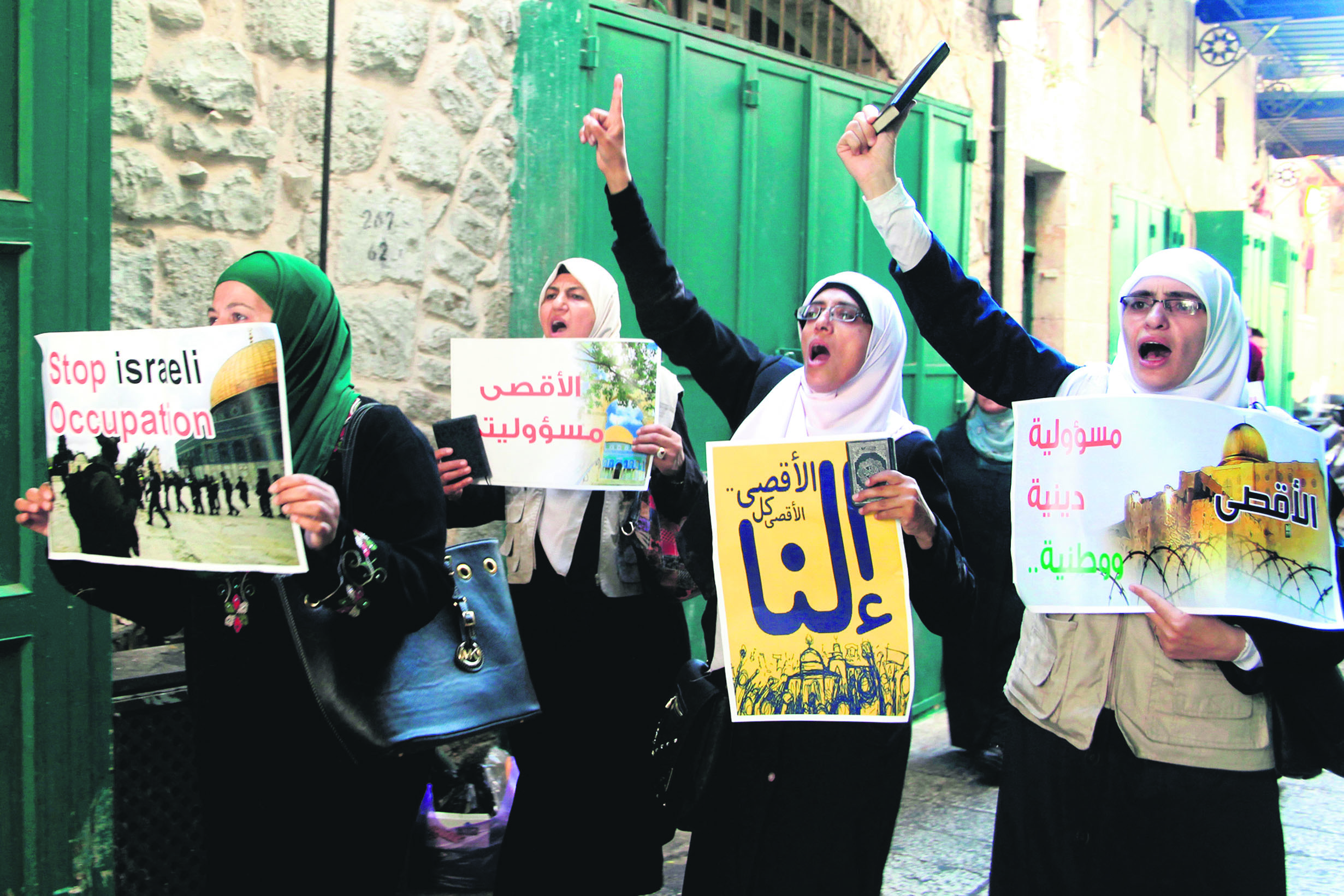 Located in Jerusalem, Al-Aqsa Mosque is regarded as the first Qıbla among Muslims. Along with a museum, madrasahs and a large courtyard, the mosque was designed as a social complex that includes the Dome of the Rock and Qibla Masjid.

Razem said attacks by Israeli soldiers have become a part of daily life. "The mosque has significance in Islam, and we have to protect it," she said, adding: "I am concerned about the future of the holy place, the first Qıbla of Muslims. What happened at Ibrahimi Mosque now re-occurs here. If the Islamic world does not resist, we will lose this place."

Another murabit, Huda Ebu Sineyne, 41, has seven children. When Israeli soldiers do not let her enter via the al-Silsila Gate, she read out the 17th verse of the Surah al-Isra. Residing in the Iseviye neighborhood of East Jerusalem, Sineyne said: "If you say you are a Muslim, then you have to protect the mosque. This is why I come here each day. I pray here and take an Islamic course." She rejected the claim that Palestinians attack Jewish settlers. "We only say "Allahu akbar." That's all. We always rehearse this word. Why is Israel troubled with this?" she asked. Her youngest son, Adem, five, is afraid of the soldiers. "Every day, he warns me and says, 'Do not let Israeli soldiers harm you," Sineyne went on to say. She has also been arrested by Israeli soldiers. The soldiers asked her why she says "Allahu akbar" and then insult her when she gives a response that does not satisfy them. Last October, Sineyne's arms were burned in a bomb attack. She called on Muslim countries to give the issues attention. "The situation is difficult here. Israeli soldiers even attack women. We should not remain silent," she said, adding that she is afraid that Israel will either take the mosque or divide it. "They will never take this mosque from Muslims. No one will accept this," she said. Although they are told to enter Jewish houses of worship without permission, Sineyne said that they have never done this. "They should respect our holy places and end these violations," she concluded.

Located in Jerusalem, the Al-Aqsa Mosque is regarded as the first Qıbla of Muslims. Jews excavate the mosque to find remains of Prophet Suleiman's temple. Along with a museum, madrasahs and a big courtyard, the mosque was designed as a social complex that includes the Dome of the Rock and Qibla Masjid. Extreme right-wing Zionists and Israeli forces enter the courtyard and buildings in the complex and harass students and prayers there. Although Muslims resist, violations still continue. Israel lets Jewish locals and tourists enter the mosque from 07:30 a.m. to 11:30 a.m., but they cannot observe prayer. Palestinians believe that the main reason for banning Muslims from the mosque is to divide Al-Aqsa between Jews and Muslims.
RELATED TOPICS