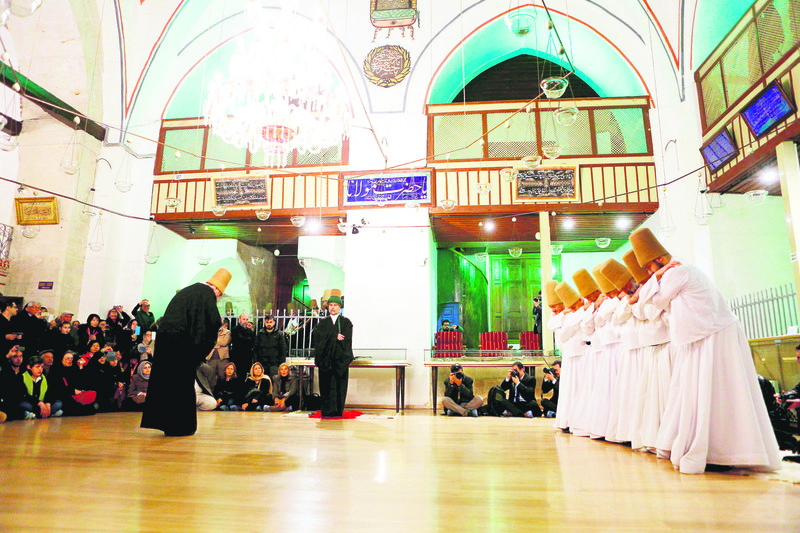 The 742nd Şeb-i Arus ceremony, known as ‘the wedding night' in Persian, was held in the province of Konya on Thursday, featuring astonishing whirling dervishes as well as vocal performances. Istanbul will host another huge event for Şeb-i Arus tomorrow at the Sinan Erdem Dome

Following the Şeb-i Arus ceremonies that took place in Konya on Thursday with the participation of President Recep Tayyip Erdoğan and the Prime Minister Ahmet Davutoğlu, Istanbul will also host a large ceremony with whirling dervishes and vocal performances at the Sinan Erdem Dome on Saturday. Organized by AdStation with contributions from the Istanbul Metropolitan Municipality and the Culture and Tourism Ministry, the Şeb-i Arus ceremonies will take place for the fourth time in Istanbul. The revenue from the event, which is a commemoration of the 742nd anniversary of 13th century Sufi scholar Mevlana Jalal ad-Din Rumi's death, will be donated to charities. According to a statement released by AdStation, the 4th Istanbul Şeb-i Arus ceremony at the Sinan Erdem Sports Hall tomorrow, will take 15,000 people on a spiritual journey. Accompanied by a group of 40 musicians, 35 whirling dervishes will perform the sema along with the Taşkın Sabah orchestra, Alişan, Sami Özer, Serkan Kaya, Kutsi, Yusuf Güney and Erkam Aydar, who will perform chants.

The sema, which Rumi described as "experiencing perpetual life in mortality, being familiar with the mysteries of God without a messenger and meeting God while embracing love," is a Sufi ritual that can touch audience members with its visual features and aesthetics. The sema, which has withstood the test of time since Rumi's time, is associated with Mevlevis and has a special divine meaning for them apart from its visual aesthetics. The whirling dervishes spin around as they recite the name of God with their hearts and mouths while performing the ritual.

Mehmet Mithat Özçakıl, an artist from the Culture and Tourism Ministry's Konya Turkish Sufi Music Ensemble, explained the codes and secrets of the sema to Anadolu Agency (AA). According to Özçakıl, the whirling dervishes of the Mevlevi order do not live to be worthy of heaven, but to be honored by God both on earth and in the afterlife. He also said that the dervishes focus on supererogatory prayers apart from their prayers five times a day. "If the dervishes give weight to their prayers, this is reflected in their performance of the sema. This spinning ritual is an invocation. It affects people and its effects are experienced by others," Özçakıl said.

Upon the wills of Rumi and his son Sultan Walad, the dervishes fast during their performance of the sema. Since the days of Rumi, dervishes have always begun sema after completing their prayers and performing ablution.

Each movement in the sema has a different principle that the dervishes must follow. "Meeting means kissing the dervish coat in the Mevlevi order," Özçakıl said. "We also greet the floor as it is the ninth heaven of God and we pay our respects. We kiss our coats, elfi-nemed [the belt], destegül [a type of two-buttoned coat] and even mest [special footwear] because there is nothing that does not mention God."

Özçakıl said that clothes have very deep meaning in the Mevlevi order, notably: "Sikke, the cap worn by dervishes, represents the tombstone of our earthly desires. Hırka, the outer coat, covers our bodies like the soil, in other words, the sema reminds us of death, but it is not always a physical death, the death in the sema" is the death of our desires. Tennure, the long white dress worn by whirling dervishes, was also worn by the prophets during the important days. The black belt we wear splits our bodies into two halves; the lower half of the body represents lustful desires and the upper part of the body represents what makes man a man. Hence, the heart is speared by God. Elfi-nemed, the belt, splits man into two beings and emphasizes the unity of God."

The sema begins after all the dervishes have come together. The leading dervish says "eyvallah" aloud and the "postnişin," or leader of the Mevlevi house, says a short prayer. Before the sema, certain Mevlevi phrases are used by the dervishes such as "aşk olsun," "aşkınız cemal olsun" and "cemaliniz nur olsun, nurunuz da ayin olsun." Following the exchange of these phrases, the postnişin recites the Fatiha surah of the Quran and a verse from the Quran's Al-i Imran surah is read. The dervishes say "destur" or "Hz. Pir" and the leading dervish puts on an outer garment, a red coat, which symbolizes the awakening of the "Meydan-ı Şerif." This ritual indicates that the stage is no longer a cultural center but a house of sema.

"According to their ranks, the whirling dervishes take their places after saluting the red coat. The highest ranking dervish wears the red coat because he is the one who follows the path of Muhammad," Özçakıl said, adding: "We take off our black coats, which represent our connection to the earthly world. The whirling dervish rises as he takes off his coat to symbolize his rebirth into the spirit world. The postnişin gives permission to each whirling dervish according to their ranks. Each dervish kisses his "sikke." During the sema, the dervishes do not talk much among themselves because Mevlevis recite the name of God in silence, but some dervishes become lost in the spirit world and perform the sema aloud. "Since the sema is a way of getting close to God, every dervish enjoys the experience in his own way."

Rumi's successor, Hussam Chalabi, traditionalized the sema following Friday prayers and Quranic recitation. Apart from this, it is well-known that the sema is performed for various reasons without being restricted by time or place. However, it is not clear when the ritual performance of the sema came to represent a showing of respect to senior officials and dervishes in Mevlevi houses.

The sema, which was performed with religious enthusiasm without any rules during Rumi's time, was systematized and disciplined in the time of Sultan Walad, Ulu Arif Chalabi and Pir Adil Chalabi.
RELATED TOPICS