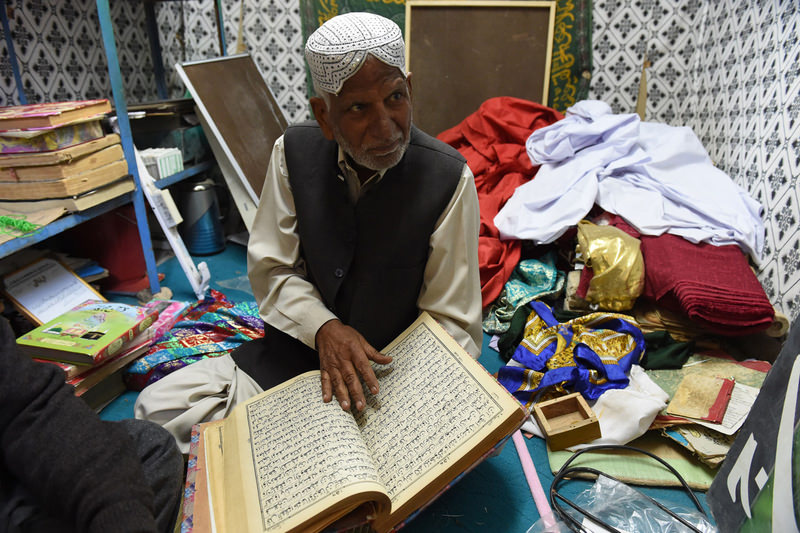 by Mar 04, 2016 12:00 am
Among the dry, biscuit-colored mountains surrounding Pakistan's southwestern city of Quetta lays an unexpected treasure: a honeycomb of tunnels bursting with cases of Qurans, hidden to preserve them from destruction.

The hill, known as Jabal-e-Nur, or "Mountain of Light," has been visited by hundreds of thousands of people since two brothers turned it into a shrine to preserve copies of Islam's sacred scripture, of which some manuscripts are as many as 600 years old, claim the administrators. "We have buried at least five million sacks of old Qurans," says Jabal-e-Nur administrator Haji Muzaffar Ali.

But the mountain's labyrinth of tunnels is steadily nearing capacity. Hundreds of sacks packed with copies of the holy book now lie exposed on the hillside as administrators struggle to create space for them.

The problem is especially thorny in Pakistan, where any disrespect to the Quran can inflame accusations of blasphemy, punishable by death - whether by the state or at the hands of a vigilante mob.

Islam's holy text is believed by Muslims to be the word of God spoken through the Prophet Mohammad directly to mankind. For that reason the words themselves are held sacred, meaning Muslims dispose of their old Quran texts with great respect.

Religious scholars approve of two ways: by wrapping the book carefully in a cloth and burying it in the ground, as at Jabal-e-Nur, or placing it in flowing water so the ink is washed away from the pages.

But the man behind the mountain, affluent 77-year-old businessman Abdul-Sammad Lehri, has an idea that if realized, would prove both risky and revolutionary: building one of Pakistan's first-ever Quran-recycling plants.

The move could turn Lehri's shrine into a target. In neighboring Afghanistan in 2011, around 1,000 angry demonstrators partially destroyed a paper mill that had been accused of recycling the Quran into toilet paper.

While in Pakistan an angry mob torched a factory in Punjab province in November 2015 after an employee was accused of burning pages from the Quran in the boiler.

But perhaps surprisingly, scholars in Pakistan say it could work.

"The scholars... approve recycling of the Quran and if a recycling plant is reusing the pages of the Quran, there is no harm," says Tahir Mehmood Ashrafi, chairman of the Pakistan Ulema (religious scholars) Council. So long as the words are removed, and the solution used to remove the ink is disposed of in accordance with Islamic teachings, leading scholar Mufti Muneeb-ur-Rehman says, "then you can use those pages to reproduce or manufacture cardboards or anything."

Existing plants in Pakistan do not recycle the Quran because of the restrictions involved, Irfan Qadir, secretary of the Punjab Quran Board, which monitors the collection and disposal of pages of Quranic verse, tells AFP - such as only Muslims being allowed to take part in the work.

"However," he adds, "we have authorized a private foundation to recycle torn out pages of the Quran on a very limited scale."

The foundation, he says, puts water and the pages of the Quran in a barrel together, where the words are washed away. Afterwards, "the water goes in a well dug in the ground, and they use the pulp to make a very soft cardboard."

The board has proposed a recycling plant for Qurans, he says, but no action has yet been taken by the government.

At Jabal-e-Nur, named after the mountain in Saudi Arabia where the Prophet is said to have received the first verses of the Quran, for now the idea exists only in the minds of Lehri and his team.

Visitors to the mountain can leave donations but pay no fee to enter, and Lehri says they need the funds. "We want to install the plant and dig out more tunnels, but have no resources," he explains. Lehri's passion for protecting the words of the Quran began in 1956, he tells AFP during an interview at his home in Quetta, surrounded by medicines and newspapers.

He spotted a newspaper with a large picture of the Kaaba lying on the floor of a friend's car, he says. Picking it up, he vowed to make it his mission to forever safeguard holy images and words. In 1992, he says, he and his brother Abdul Rashid were running a stone-crushing business on a property leased in the hills outside Quetta. But they were only using a small portion of the space leased. So as he says, "I decided to bury them [the pages] inside this mountain."

As the flow of pilgrims to Jabal-e-Nur increased, many began leaving messages scribbled on the walls of the tunnels - graffiti prayers, most seeking love, for God to grant. "Oh God, may I get a marriage of my choice," pleads one, while others are more specific: "God, please break Amina's engagement and rid her of Hamza." Those who run the mountain are now also praying for a miracle. "I've asked some [rupee] billionaire friends to help" fund the recycling plant, Lehri tells AFP. "They initially agreed - but now they are not responding," he says.
RELATED TOPICS