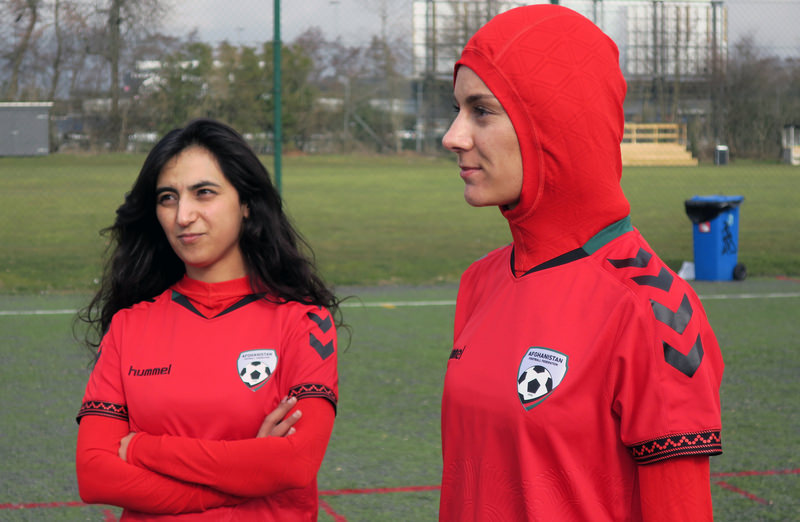 by Associated Press
Mar 08, 2016 12:00 am
With a little tuck here and a little tuck there, Shabnam Mabarz hides her long hair under a red headscarf and gets ready to play.

Mabarz and her teammates will be the first to wear a new hijab that is connected to the base layer under their national team shirt. The new creation, which also includes leggings, will make it easier for women to combine their soccer with their faith.

Using it is optional.

"This jersey is the Afghani team uniform and I am proud to be a role model for thousands of young girls and women back home in Afghanistan," said Khalida Popal, the team's former captain. "It is very special to me. It is our identity."

The outfit was designed by Danish sportswear brand Hummel, the company that also makes the national team uniforms for Denmark and Lithuania.

Playing soccer in Afghanistan can be dangerous for women, so many members of the national team live in Europe.

"Football was not easy for us to play, especially in a male-dominated country," Popal told The Associated Press. "It was not acceptable for women to play. Football is a man's game."

When women are allowed to play in Afghanistan, they are usually required to wear a headscarf. But that often proves tricky with the cloth sometimes falling over the players' eyes.

"So we thought of this solution, the sports hijab that is part of the whole package we made for the Afghan Football Federation," Hummel owner Christian Stadil said. "We wanted to make one that is cool and fashionable."

Stadil, who previously sponsored the exiled Tibet team, said the brand was in talks with other Middle Eastern countries to provide a similar outfit. He declined to name them.