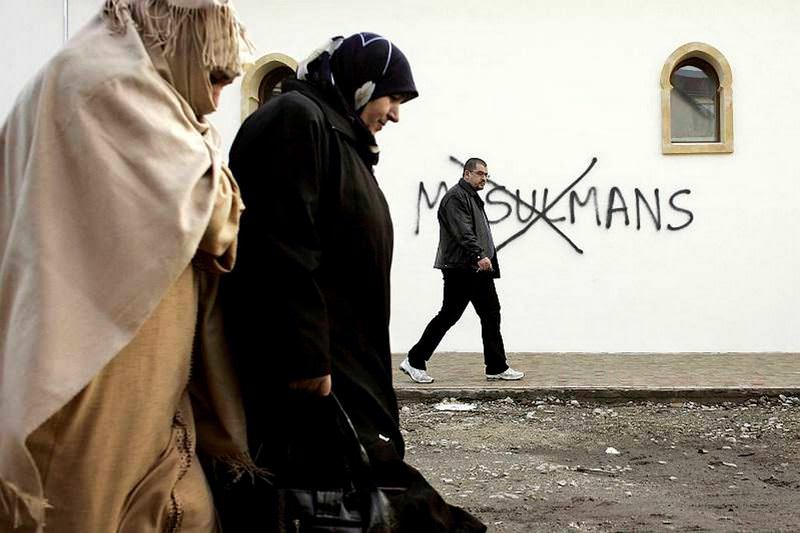 Reports released by the Organization of Islamic Cooperation and the remarks from Mehmet Görmez, the head of the Presidency of Religious Affairs, state that Muslim countries must combat the increasing Islamophobia

As the migrant influx into Europe and the terror attacks remain the biggest crisis facing the European Union, far-right parties and organizations across the continent are taking advantage of the situation to increase their profile. While the far-right movements were linking Islam and the terror directly, several Islamic scholars and institutions, including Organization of Islamic Cooperation (OIC) have rejected the link and said that the terror groups do not represent the religion at all.

In the 8th annual report on Islamophobia, the OIC report stated that Islamophobia is a fact and must be combatted through explaining true Islam. "One of major factors contributing towards this growing negative perception should be the DAESH phenomenon, despite the ongoing similar forms of extremism in different parts of the world, such as Boko Haram in Nigeria, Al Shabaab in Somalia, and Taliban in Afghanistan," the report said. "The sign of such discrimination was very apparent, once again, in the western liberal democracies, where 'immigrant' Muslims were living as minority groups and had to struggle for their blending with the rest majority," the report added. After highlighting that terror incidents harden life for Muslims, the report said "Muslims living in the United States have been under close surveillance by the US authorities since the 9/11 terrorist attack in 200130; and the Observatory believes that this intelligent activity was still ongoing during the period under review. For instances, according to an online documents by NSA whistle-blower Edward Snowden, the U.S. government had spied on thousands of law-abiding Muslim-Americans including top US lawyers and academics since the last two decades. The monitoring activity was authorized under the Foreign Intelligence Surveillance Act (FISA), a law intended to target individuals involved in international terrorism, espionage or sabotage."

The head of Turkey's state-run religious affairs body has called on the West to avoid Islamophobic rhetoric amid rising far-right activity in Europe and the refugee crisis. "Our Western friends must primarily protect themselves from ostracizing, marginalizing and [holding a] discriminatory mentality," Mehmet Görmez, the head of the Presidency of Religious Affairs (DİB), told Anadolu Agency (AA) yesterday in Strasbourg. "Phobia is an illness. But this illness should not be vocalized. We all have to make an effort to prevent this illness from turning into hatred and marginalization," Görmez said, adding that anti-Muslim outbursts in Western countries have caused Muslims to become alienated from society. Görmez said violence, war, colonization and the invasion of other countries are some of the many reasons behind the marginalization of people from Muslim backgrounds. France, for instance, has a large Algerian population as a result of its colonial rule in the country from 1830 to 1962. Moroccans are also the largest group of non-Western immigrants in Belgium, with almost 82,000 residing in the country in 2010, according to Belgian government data.

Similarly Iyad bin Amin Madani, secretary-general of OIC said terrorism causes hatred among Muslims and leads to Islamophobia against Muslims in the world. "Extremism fractures social cohesion. It holds back important matters such as justice, development, and welfare," Madani said. Saying that Muslim countries should fight terror, Madani stressed that terror also prevent progress and reforms. The Saudi diplomat also cautioned against sectarianism, adding, "These divisions worsen our circumstances." Saudi Minister of Islamic Affairs, Endowments, Call, and Guidance Saleh bin Abdul-Aziz Al ash-Sheikh also said that "The Islamic community wants us to protect Islam from terror and terrorist organizations. I hope we will solve the problem of Islamophobia together," in Ankara.

A recent report by the Cordoba Foundation think thank suggests that there has been a cynical switch in the target of hate for extremist groups, claiming: "Traditional far-right movements have often emphasized anti-Semitic conspiracy theories; more recently, they have focused [on] anti-Muslim narratives." Recent social media posts from all of the aforementioned fascist and far-right groups all target Muslims and Islamic beliefs, and more Islamophobic attacks have been reported since the terrorist attacks in Paris and Brussels. The Cordoba Foundation report quoted Professor Matthew Goodwin, an expert in immigration, radicalization and Europe, at the University of Kent: "[Far-right] activists have embraced the Internet to such an extent that for them, [it has] become an indispensable tool of communication." Across Europe, there has been a shift toward right-wing parties, which have been gaining popularity over the fear of a refugee influx. Recently, polls noted a rise in support for right-wing parties in Austria, Poland, France and Switzerland, and xenophobic comments by political figures have become more visible, including the leader of the German right-wing party Alternative for Germany (AfD) who said the border guards should shoot at migrants if they try to enter illegally.
RELATED TOPICS