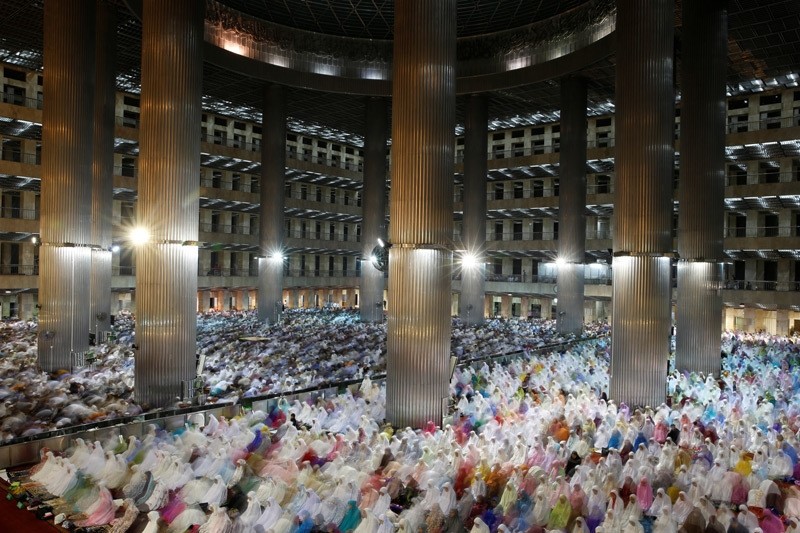 Residents from the world's most populous Muslim nation are preparing for the holy month of fasting, with some flocking to the graves of their dead parents to pay homage, some helping to clean local mosques, and others queuing in the crowded markets of small towns to procure ingredients essential to that first iftar.

Since early morning, residents of the city of Tuban in East Java Province have been gathering items for their Ramadan dishes.

"For the first day of fasting, iftar should be a luxury," local man Muhamad Ali told Anadolu Agency, saying that he was buying a chicken for cooking opor ayam (chicken cooked in spicy coconut milk) on the first day.

"From then onwards, ordinary dishes are fine," he adds.

All around Indonesia, people pack buses, trains and cars to speed home to their respective areas to visit the graves of their parents and follow the start of the fast with the family.

"I take six hours by car to get to my hometown in order be able to visit my mother's grave," 36-year-old Setiawan says.

Earlier Sunday, the country's Religious Affairs Ministry had announced that Ramadan would start Monday, but for many preparations had already begun -- some participating in various acts for at least one week before the fast.

In the central Javan port city of Semarang, Indonesians conducted a bubur (rice porridge) festival last Monday, the area's women stirring up ten gigantic bowls of porridge to distribute to visitors for free.

"This event is held to preserve the culture before Ramadan," event chairman Tri Siswanto told Anadolu Agency by phone Sunday, adding, however, that it only takes place after residents help to clean up local springs.

Outside of the grand porridge making, others in Semerang participate in traditional dances, and an acoustic music festival.

Meanwhile, in various regions of Pasuruan Regency in East Java province, locals flock to mosques to wash the carpets, while others pray at a local natural water spring.

In Yogyakarta, hundreds of young people on Saturday gathered at a shopping mall in the city center to sweep it clean.

"Malioboro is the center of activities of citizens," one person who did not wish to be named told detik.com. "Many tourists come here. We care about this place so we clean it before the month of Ramadan."

For some, however, preparations are a little more frenetic.

In Bangka Belitung, local citizens hold "perang ketupat" which sees two groups fling boiled rice wrapped in coconut leaves at each other as a symbol of unity and a stand against oppression.