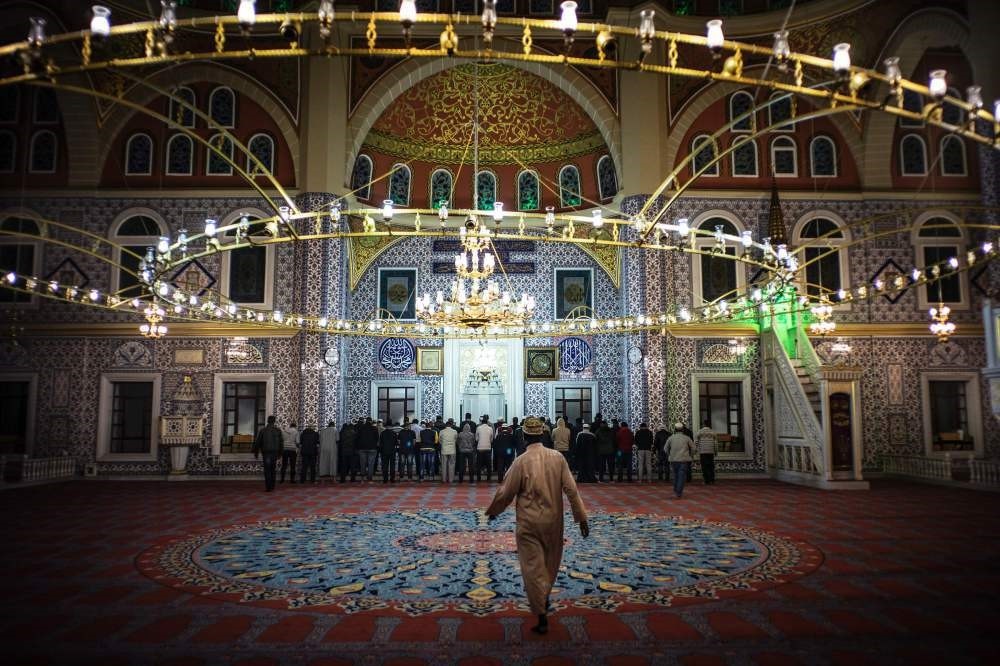 Monday's sunset formed silhouettes of local Muslims congregating anxiously on Cape Town's shores to glimpse the new moon that would signal the start of Ramadan in South Africa.

As the gathering's silence grew with the winter chill, the pronouncement that Ramadan was starting was made by Shaykh Seraj Hendricks, chief arbitrator of the Crescent Observer Society.

This gathering is a tradition dating back to the 17th century after Muslims from the Indonesian archipelago were brought in as slaves by the Dutch. It is a tradition that is in danger of becoming a memory of what communities in South Africa once did to commemorate their beloved Ramadan. Hendricks, speaking to Anadolu Agency, says: "It was only 60 years ago that we formally instituted an organization to manage the moon sighting, and it is sad to see that today we find a decreasing number attending it. "Our forefathers had to sight the moon in secret, as Muslims were not initially allowed to publicly practice their religion." Agmat Davids has been attending Ramadan moon sightings since the age of 11. For him, the problem extends further than the decreased attendance. The traditions of Ramadan he treasures and holds dear are being neglected or forgotten. Davids, now 63, reflects upon how the traditions forming bonds between diverse ethnic populations are fading as younger generations displace their elders. "I have seen the Ramadan of my grandparents and parents," he said. "It is not the same as it was. There is a bridge broken between my generation and the ones that now follow." In 1960, the oppressive apartheid government introduced the Group Areas Act, which confined certain ethnic groups to specific localities. This led to clustered Muslim areas, promoting tradition as part of everyday life. Davids says: "Ramadan was not a meal kept in one house but a meal [where] neighbors walked in and smiled over the table covered in food. Nowadays, this is considered strange and rude."

The loss of this tradition has closed off houses from their community. But in some areas the spirit of exchanging small meals with neighbors and friends still lingers. "I go next door with pies in Ramadan. I get a lollipop and a plate of snacks to take home," seven-year-old Hafeeza Moosa, says: "It lets me feel part of my neighbor's house." Her father, Farouk, says that she is the only child in their area who still does this. "Fifteen years ago the streets in Ramadan were full of neighbors' children. I am trying to keep alive this tradition that brings social cohesion. I walked to the neighbors with food when I was a child," he says. Now little children are rarely seen energetically filling the streets, delivering food to neighbors; teenagers feel too embarrassed to knock on doors to pass on sweet treats or savory meals. Abdul Raaziq Ismail, 14, says: "I am not a bad Muslim if I don't go. This is something little children can do. I can do other stuff. They [neighbors] have enough food already."

The sentiments from Davids and Moosa are in line with research by Abdulkader Tayob, an Islamic studies professor at the University of Cape Town. Tayob states that previous set areas, which were bound by law, are now porous, allowing for young newlyweds to move to areas that do not have an established Islamic culture. This separates youths from their elders, who are the main community transmitters of traditions. These youths now determine the priority of those traditions practiced in their childhood to the importance of their adult lives. "When I moved from home there was the gap in the religious spirit that I experienced as a child in Ramadan. It is not here, because this is not a Muslim community. This is an area I live in for career convenience," said Davids' daughter Shafeeka, 22. Tayob says that a particular stream of perceived Western modernization has individualized spirituality among young people, rather than making it community-based. "It's challenging to find that the youth consider Ramadan traditions to be something separate from themselves. So there's this lack of effort to do it and instill it in their children," says Hendricks.

According to Tayob, the traditions in the holy month are more than religious culture being expressed but value practices that strengthened relations between Muslims.

Suleiman Bham, 28, has moved between cities in South Africa and agrees that Ramadan's traditions are not being maintained properly by young people. "Some of the special nights are catered with food after late evening Ramadan prayers at mosques. We would go there to be with our Muslim communities. Now, it has become events for people to attend and socialize over food. It is empty of that Ramadan spirit," he complains. The religious experiences of these traditions are still yearned by some youths, even though it is being neglected. Kashiefa Solomons, a mother of three teenagers, says: "If I try to motivate them to go sight the moon or go next door with food or to help me make badam milk, there are always excuses. They have no time for traditions but time for their phones."

Hope for the future

Muslim refugees and expats that have settled in South Africa are upholding these traditions because of their universal values and similar practices in their home country. Sudanese refugee Isa Salih says: "I don't have much here but Ramadan is nicer when I share with my South African brothers in Islam. It's like we are connected in our hearts." A Turkish mosque that opened four years ago in Johannesburg has revitalized the spirit of Ramadan for some locals. "I have been to the Turkish-built mosque in Johannesburg in Ramadan and the environment was very welcoming. It was a community that let my spirit feel again what I thought was lost," Bham said. Although attendance has fallen for the moon sighting, Hendriks feels that this is only temporary. "The relevance is there to sustain the Crescent Observer Society, because there is a formal institution to maintain it. These traditions of our beloved month need a solid platform to build on," he said. Hendricks recommends that the traditions should either be formalized or institutionalized in order to retain not only the spirit of Ramadan but heritage as well. Davids thinks the solution is to reconnect the youth to the nostalgia of Ramadan's traditions. He feels that social media should be used to maintain and promote traditions.

Even though he admits that he does not know how to use Facebook and other social media, he knows that his children are informed about it and should use it to compliment the traditions of old.

Unless South African Muslims find a way to preserve their heritage, Ramadan traditions that instilled community values and strengthened societal bonds will be left to wither in the history of their elders.