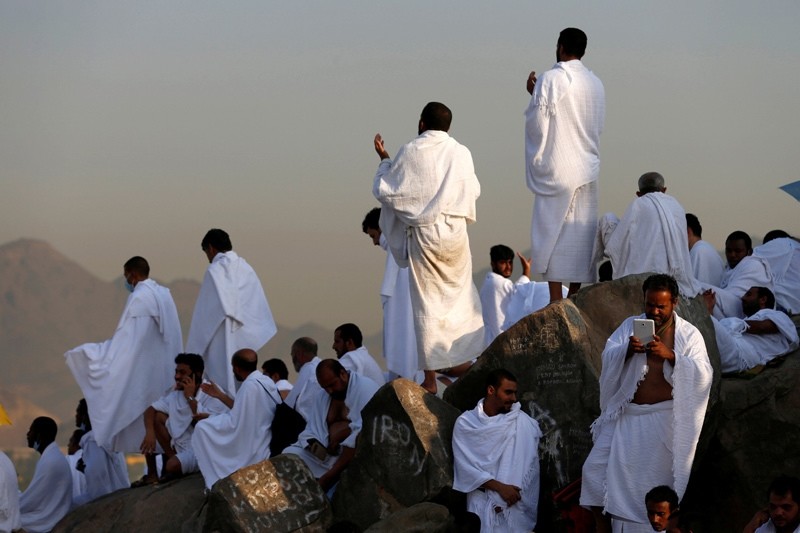 Muslim pilgrims gather on Mount Mercy on the plains of Arafat during the annual haj pilgrimage, outside the holy city of Makkah, Saudi Arabia September 11, 2016. | REUTERS Photo
by Anadolu Agency Sep 11, 2016 12:00 am

Nearly two million Muslim pilgrims from around the world ascended Mount Arafat, east of Mecca, on Sunday in the climax of the Hajj pilgrimage.

Pilgrims flocked to Arafat from early morning after spending a night of meditation and introspection in the tent city of Mina, which marked the first leg of their five-day Hajj.

Saudi authorities said that more than 1.8 million pilgrims from around the world are performing Hajj this year.

Since arriving in Mecca, the pilgrims chant "Labbaik Allahumma Labbaik (Here I am answering Your call, O God)".

The pilgrims spend the day on the Arafat plateau in supplicating to God to forgive their sins. They then will descend by train back to Muzdalifa, halfway between Arafat and Mina, where they will take part in the symbolic stoning of the devil.

On Monday, all pilgrims head back to Mina, where they sacrifice animals to mark the beginning of the four-day Qurban Bayram (Feast of the Sacrifice), also known as Eid al-Adha.