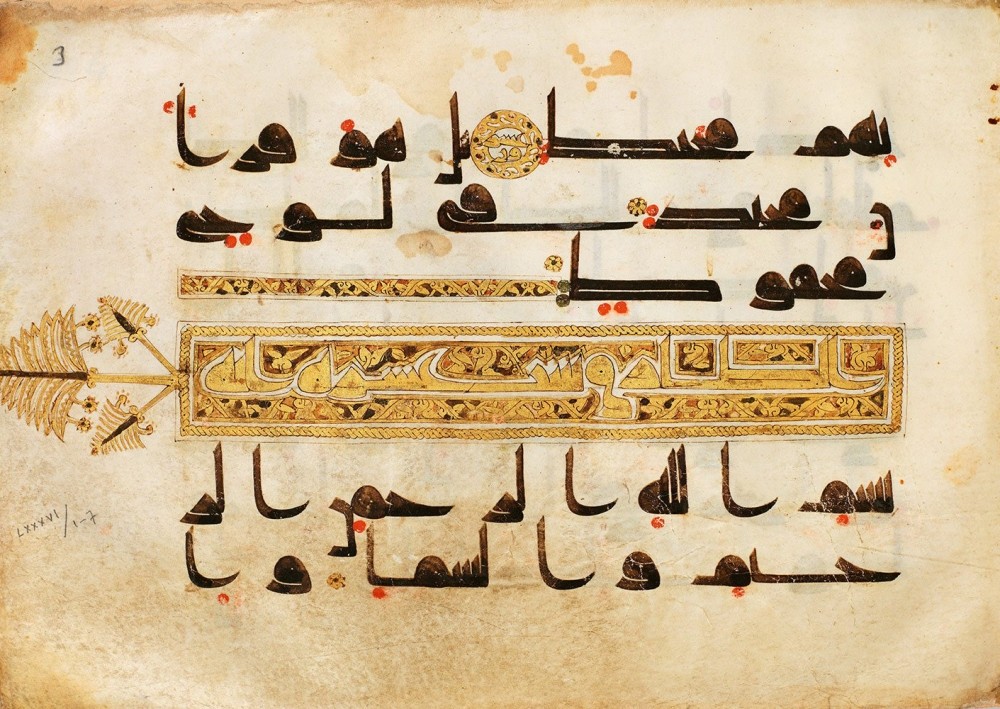 One of the ancient Quran manuscripts displayed at the exhibition. These majestic holy books were copied by hand for some of the richest and most powerful rulers of the Muslim world.
by Compiled from Wire Services Oct 24, 2016 12:00 am

The first U.S. showing of rare, old Qurans opened on Saturday in a Washington museum, highlighting the art of calligraphy in Islam.

The manuscripts. which cover almost 1,000 years of the history of Islamic art between the 8th and 17th centuries, are hailed as artworks for their exceptionally fine calligraphy. More than 60 Quranic scripts will be featured in "The Art of the Quran," running through to Feb. 20, 2017 at the Freer and Sackler Museums at the Smithsonian Institute which is home to their Asian art collection.

These majestic holy books were copied by hand for some of the richest and most powerful rulers of the Muslim world. Most of them - 47 out of 63 - were lent to Freer and Sackler from a single source, the Museum of Turkish and Islamic Arts in Istanbul. The rest were already part of the Smithsonian collection.

The exhibition, contained in the intimate setting of a single room, tells the story of how the words and teachings of the Quran, traditionally passed down via oral recitation, came during the 7th century to be inscribed in fixed and permanent texts.

The exhibit touches lightly on the messages of the holy book. Deputy curator Simon Rettig said, "We are above all an art museum," during a press news briefing last Thursday. "So, we come at it more from the angle of explaining how the Quran took the form of a book and how the arts of calligraphy and illumination (the decoration and illustration of manuscripts) developed around the book."

"We wanted to really show the variety of manuscripts," said Massumeh Farhad, the show's chief curator.

The Qurans on display, she noted, come from all parts of the Muslim world, from Iraq to Afghanistan and Turkey. There is a Quran on parchment paper copied by a calligrapher in Iraq or Iran between the late 8th and early 9th century. Another Quran, measuring some six feet by three feet (two meters by one meter) dating back to 1599 in the Iranian city of Shiraz, is done in colored ink with gold-encrusted letters. These Qurans were commissioned by the elites and created by artisans but they also had second or third lives noted in their inscriptions that reflect the history they witnessed, said Rettig. One Quran completed in 1307 for the tomb of Mongol leader Uljaytu in Soltaniyeh, Iran, was taken to Istanbul by Sultan Suleiman the Magnificent in 1531 and then to his relatives. "This book has seen more incredible moments than I've had in my life," Rettig said.

"What is remarkable here is the incredible variety of the Quran manuscripts, their sizes, the scale, the scripts. Especially when you think that the Quran is the same identical text copied over and over and over again. So you can't do something different. It's the same thing."

The exhibition will showcase different styles of calligraphy and illumination. Visitors will be able to compare different Qurans and see the sweep of history in front of them. The exhibition also shows how diverse the Muslim world is.

The exhibit which has been in the works for six years, was originally set to open in 2014 but was delayed due to construction, museum officials said. The primary aim of the exhibition is to create a cultural bridge between nations and various religions as well as help people understand the art of Islam as well as the peaceful message that the Quran conveys to all people around the globe.

Speaking about the purpose and message behind the exhibition for its visitors, deputy curator Rettig said the show represents, "a tremendous opportunity for dialogue between cultures" and an occasion to "build bridges."

"Hundreds of thousands of people will come to this exhibition and learn about the Islamic world, its art, its culture," said Richard Kurin,under secretary for museums and research for the Smithsonian, which operates most of the museums in the U.S. capitol. "At this time in our history in our country, it's so important that we do this, so that knowledge rather than ignorance shall prevail," Kurin added.

In addition to the exhibition, there will also be several seminars and panels on Islamic art, curator tours, family-friendly events and hands-on art activities, storytelling and live demonstrations of calligraphy and illumination. A Quran symposium will also take place Dec. 1 at the Turkish Embassy to the U.S.

The Arabic text of the Quran was fixed as early as the late 7th century, Farhad said, but the variety in Qurans is "staggering." The exhibition will showcase different styles of calligraphy and illumination. Visitors will be able to compare different Qurans and "see the sweep of history in front of us," said Sheila Blair, an art history professor who specializes in Islamic art at Boston College and Virginia Commonwealth University. "It shows how diverse the Muslim world is."
RELATED TOPICS