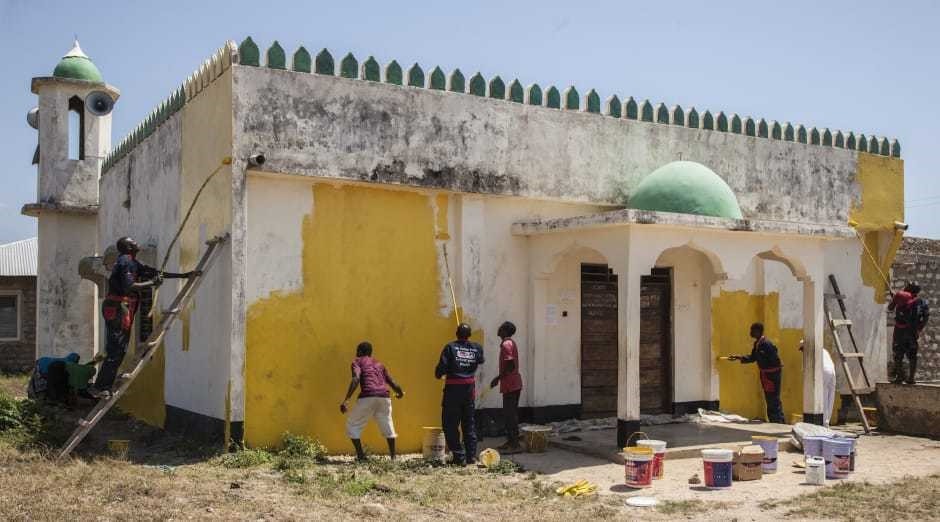 Anadolu Agency visited Kibera, African's largest slum, where some of the places of worship are located, to find out what the color symbolizes and why this singular trend is taking root in the East African country.

As the sun sets in Kenya, reflecting its golden rays off thousands of rusty iron sheets in Nairobi's Kibera slum, a couple of buildings painted yellow stand out from the usual oranges and browns dominating the rusted iron sheets and mud houses.

One of the buildings is a mosque, while the rest are churches, all painted golden yellow.

Sheikh Yusuf Nasur Abuhamza, who leads the Jeddah Mosque, told Anadolu Agency that the mosque was the first place of worship in Kenya to be painted yellow. "I remember that day as if it was yesterday. Both Muslims and Christians came here to paint the mosque," Nasur says, pointing to a section of the mosque's walls.

"Everybody was happy, this is the significance of the color yellow. Christians and Muslims have always lived as brothers and sisters, helping each other when in need. This is the message that we are sending, we want to promote peace, love and unity among all religions," he added.

The "color in faith" project to paint Kenyan houses of worship yellow started this August, although the actual painting took place just a month ago, according to project organizers.

Speaking to Kenya's Nation television, Nabila Alibhai, who spearheaded the project, spoke about the significance of the use of yellow.

"Yellow is a color that is neutral, it is also the color of light and light dispels darkness. When you look at paintings of divinity and of angels and of saints, they seem to be flanked with this aura of yellow."

With the project's co-founder, Colombian artist Yazmany Arboleda, Alibhai has also worked in Afghanistan and Kabul on similar projects to spread peace and unity among religions.

Abdi Fatah, one of the Muslim faithful, who prays at Nairobi's Jeddah Mosque, told Anadolu Agency that he longs for the day when Muslims will no longer be seen as terrorists due to the terrorist acts committed by the al-Shabaab militant group.

In recent years al-Shabaab militants have carried out a spate of attacks on Kenyan soil, including the most notorious, an April 2015 attack claiming the lives of more than 140 students at Garissa University.

The attacks have driven a wedge between Christians and Muslims, as the militants claim to be protecting Muslims who are oppressed and killed by Kenyan security forces.

But Nasur said, "We should not allow religion to divide us, mostly after being mixed with politics. A Christian should not fear a Muslim and Muslims shouldn't do the same. We need to help each other as humans."

He added that as soon as they finished painting the mosque, they all marched down to the Anglican Church of Kenya (ACK) Holy Trinity parish, almost next door, to give that place of worship a fresh coat of paint.

"The church is just up that road 200 meters from here, you can't miss it, it's the one with the yellow roof," he said, pointing to a roof in a distance.

At that selfsame church, Anadolu Agency caught up with Rev. Albert Woresha, who remembered the day Muslims came to paint the church.

"They came here in large numbers. We painted every inch of our church together. The aim of this project is to remove any barriers that stand between us and our Muslim brothers," said the clergyman.

"The color yellow is peaceful and spreads love in society, just like the sun above us shines on all of us. We are grateful for this project and we hope that one day all churches, mosques, and temples in Kenya will have one color."
RELATED TOPICS