Pope calls for peace in his Christmas message 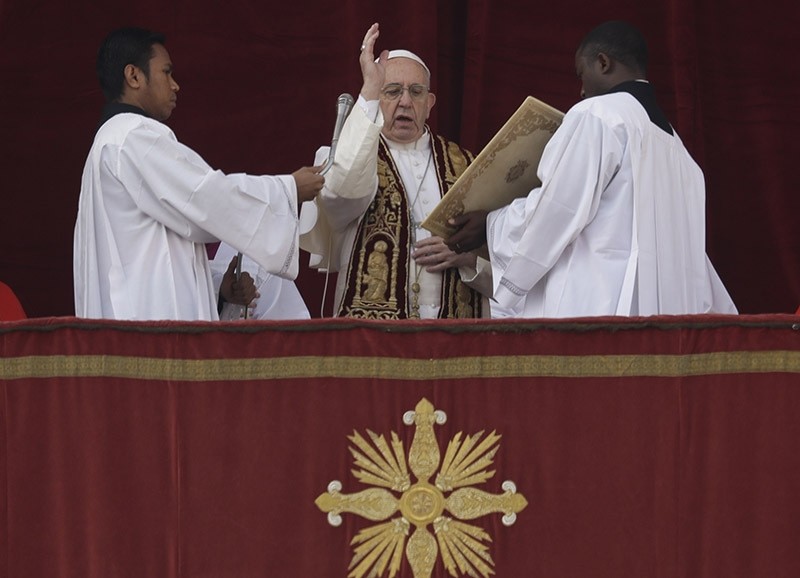 Pope Francis urged peace around the world in his traditional Christmas address on Sunday, calling for weapons in Syria to fall silent and offering comfort to victims of terrorism.

He wished Christmas peace for people scarred by wars and those who lost loved ones to terrorism that he says is sowing "fear and death" in many cities and countries.

Speaking from the central balcony of St. Peter's Basilica Sunday, Francis cited those suffering through the Syrian war, especially during the "most awful battles" in Aleppo.

As Europe ramped up security for the holiday just days after the truck attack that left 12 dead at a Berlin Christmas market, the leader of the world's 1.2 billion Catholics said he hoped for "peace to those who have lost a person dear to them as a result of brutal acts of terrorism".

"It is time for weapons to be still forever, and the international community to actively seek a negotiated solution," the pontiff told the crowds from the balcony of Saint Peter's Basilica.

He also urged Israelis and Palestinians to "have the courage and the determination to write a new page of history, where hate and revenge give way to the will to build together a future of mutual understanding and harmony."

The pope also urged peace in Iraq, Libya and Yemen -- "where their peoples suffer war and the brutality of terrorism" -- and expressed hope for an end to conflicts in Africa, including in Nigeria and South Sudan.