Knights of Malta chief resigns over condom row with Pope 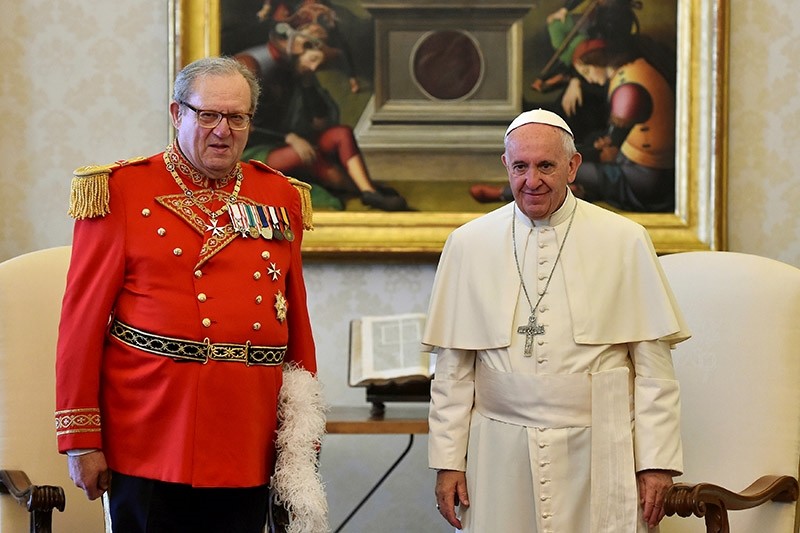 Pope Francis (R) meets Robert Matthew Festing, Prince and Grand Master of the Sovereign Order of Malta during a private audience at the Vatican on June 23, 2016. (Reuters File Photo)
by Jan 25, 2017 12:00 am

The head of the Knights of Malta, who has been locked in a bitter dispute with the Vatican, has resigned, a spokesperson for the Rome-based Catholic chivalric and charity institution said on Wednesday.

The spokesperson said Grand Master Matthew Festing, 67, had resigned after Pope Francis asked him to step down at a meeting on Tuesday. Grand masters of the institution, which was founded in the 11th century, usually keep their positions for life.

"The pope asked him to resign and he agreed," the spokesperson said, adding that the next step was a formality in which the group's Sovereign Council would have to sign off on the highly unusual resignation. The order would be run by its number two, or grand commander, until a new head is elected.

Festing and the Vatican have been locked in a bitter dispute since one of the order's top knights, Grand Chancellor Albrecht Freiherr von Boeselager, was sacked in December in the chivalric equivalent of a boardroom showdown - ostensibly because he allowed the use of condoms in a medical project for the poor.

Von Boeselager appealed to the pope, who appointed a five-member commission to look into the unusual circumstances of the sacking, but Festing refused to cooperate and called the commission illegitimate.

Festing's resignation was the latest twist in a battle of wills between the heads of two of the world's oldest institutions.

Festing, a Briton, had denounced the papal commission as intervention in the order's sovereign affairs, accused members having a conflict of interest and defiantly set up his own internal commission.

The Vatican, in turn, rejected what it said was an attempt to discredit members of the commission and ordered the leaders of the institution to cooperate with the inquiry. The papal commission was due to deliver its findings to the pope at the end of the month.

The all-male top leaders of the Knights of Malta are not clerics, but they take vows of poverty, chastity and obedience to the pope. The institution has 13,500 members, 25,000 employees and 80,000 volunteers worldwide.

The order, formed in the 11th century to provide protection and medical care for pilgrims to the Holy Land, has the status of a sovereign entity. It maintains diplomatic relations with over 100 states and the European Union and permanent observer status at the United Nations.

When Festing fired von Boeselager, he accused the German of hiding the fact that he allowed the use of condoms when he ran Malteser International, the order's humanitarian aid agency.

Von Boeselager and his supporters say the condom issue was an excuse by Festing and Cardinal Raymond Leo Burke, an arch-conservative who has accused the pope of being too liberal, to increase their power.

The church does not allow the use of condoms as a means of birth control and says abstinence and monogamy in heterosexual marriage is the best way to stop the spread of AIDS.

Von Boeselager said he closed two projects in the developing world when he discovered condoms were being distributed but kept a third running for a while because closing it would have abruptly ended all basic medical services to poor people.

Francis has said he wants the 1.2 billion-member church to avoid so-called "culture wars" over moral teachings and show mercy to those who cannot live by all its rules, especially the poor.