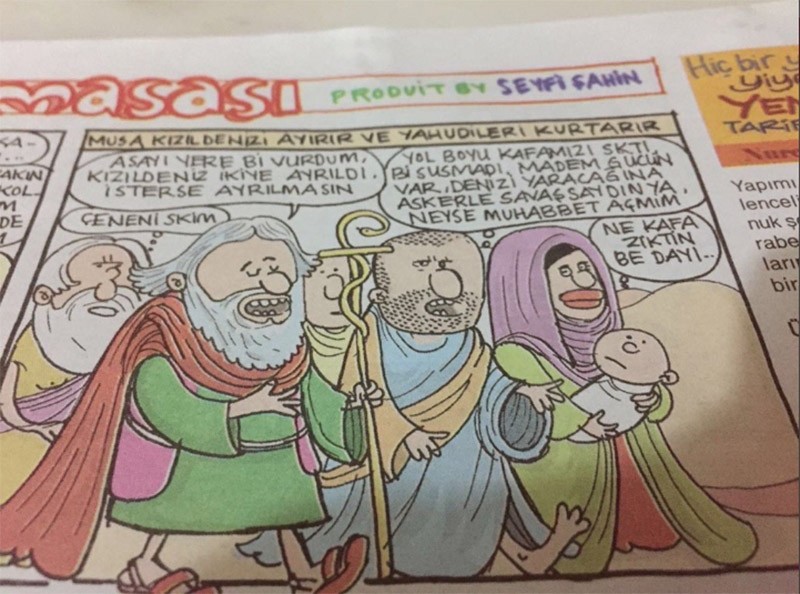 A satirical weekly has drawn the fury of Muslims and Jews in Turkey when it published a cartoon considered insulting to Moses, a sacred figure for both Abrahamic faiths.

After a barrage of complaints on social media, Gırgır, a magazine distributed for free and sponsored by the Sözcü newspaper, apologized for the cartoon and its publisher announced that the magazine would be closed and the artist behind the cartoon will be sued.

The cartoon shows Moses in a scene also depicted in the Bible as he walks with other Israelites fleeing Egypt through Red Sea he parted in an act of miracle. As he speaks to the company of Israelites, some in the crowd make fun of him and some swear at him for "grandstanding."

Issuing a statement, Turkey's Jewish community said they condemned, "humor based on insulting what is sacred" and urged the state to "take the necessary measures against hate crimes that are committed through writing or humor."

"This is not humor or freedom of speech, this is hate crime. I strongly condemn this disrespectful act which targets people of a specific faith," presidential spokesman İbrahim Kalın said on Twitter with the cartoon attached to the tweet.

Social media was awash with criticism, both from conservative Muslims and members of the Jewish community.

Through its Twitter account, Gırgır weekly apologized and linked the publication of the cartoon to "a mistake of not noticing an awful cartoon due to being tired and sleepless" to rush the magazine to print.

On Friday, the publishing company behind Gırgır announced the magazine would be closed due to the "unpleasant" cartoon," issuing a statement that reads, "As the publishing company, we were disturbed by this cartoon like the rest of the public. We believe it is deliberately included in the weekly to harm our company. We have not been informed about the inclusion of this cartoon and it was, in a way, slipped into the weekly at the last minute," a statement by the company's lawyer said. The statement also said artist and employees of the magazine committed a crime and that a lawsuit would be filed. Soon, a prosecutor's office in Istanbul, announced a criminal inquiry was opened into the incident on charges of "insulting religious values."
Last Update: Feb 17, 2017 7:46 pm
RELATED TOPICS