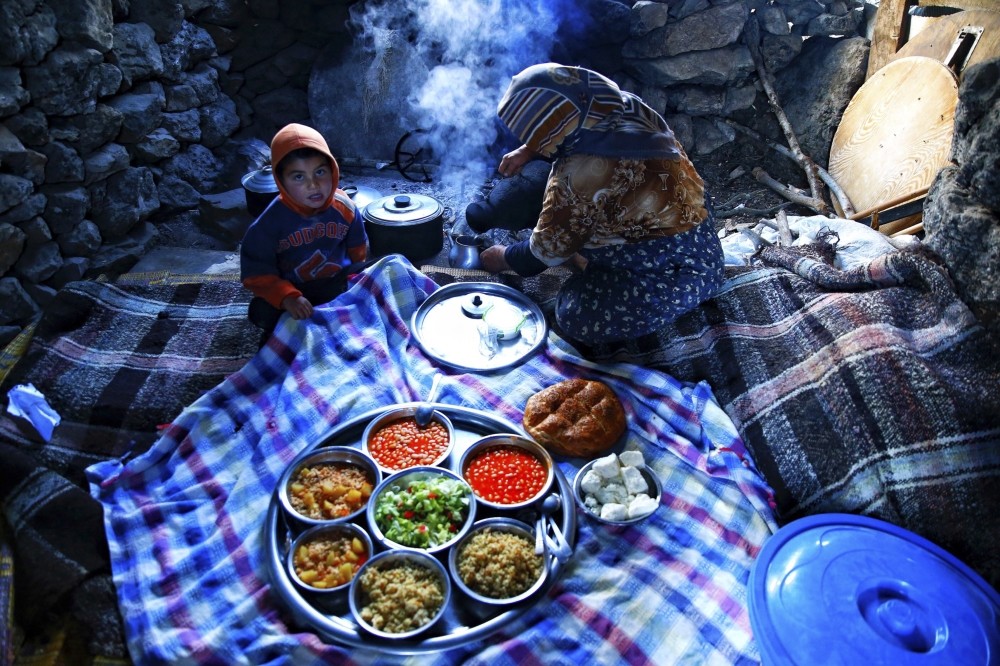 Yu00f6ru00fck iftar tables are adorned with traditional Turkish nomadic foods like bulgur pilaf cooked in smokey pots over a wood-burning fire and keu015fkek
by Anadolu Agency Jun 03, 2017 12:00 am

Despite their nomadic lifestyle that makes it harder to establish order, especially in the kitchen, Yörüks care to make iftar tables that feature unique tastes of nomadic culture

Turkish Yörüks or nomads moved to the highlands a bit earlier this year because of Ramadan, and during this holy month their iftar tables are adorned with traditional nomadic foods like cooked flour, fermented meat, bulgur pilaf, frozen fried meat, dried fruit compote, "keşkek" (a dish made of mutton or chicken and coarsely ground wheat), "bükme" (a type of pancake with cheese and vegetables) and "kömbe" (a kind of oily pastry).

The challenging, on-foot journey of these nomads, formerly referred to as Turkmens during the Seljuk Empire and the Yörüks in ancient Ottoman times, started their migration earlier due to the month of Ramadan. Despite harsh living conditions in the mountainous and rough terrain of the mountain range, this nomadic tribe pays a great deal of attention to Ramadan, welcoming the holy month inside of nomadic tents made from animal hair.

Cooking traditional Turkish flatbread on iron plates, they meticulously arrange the ifthar table every evening for the fast-breaking meal.

As they do not need refrigerators due to their position at higher altitudes, yörük women dry mutton and goat's meat and freeze it after roasting the meat in rolls.

The Yörüks' iftar tables are adorned with traditional Turkish nomadic foods like bulgur pilaf cooked in smokey pots over a wood-burning fire and "keşkek," which is prepared with ground wheat as well as cooked flour prepared with butter and salt, dried fruit compote, various main courses made of fermented meat, pancakes cooked with cheese and vegetables known as "bükme" or "gözleme," mutton yogurt and goat's cheese.

Consuming molasses with tahini as a dessert, Yörüks steep their tea with water they boil in copper pots.

Havva Kara, a yörük women living on the highlands at the Kızılağaç camp which is located in the Akseki district of Antalya province, spoke to Anadolu Agency (AA) and said that they always use a wood fire for cooking their meals, baking bread and steeping tea.

Implying that the taste of meals cooked in a smokey pot is really different, Kara said, "You can find everything on a yörük's table. We put everything we have on the iftar table. We cook whatever we have like bulgur pilaf, dried beans, ground wheat and tarhana (a traditional fermented soup)."

Stating that they love the cool and fresh air immensely, Kara added, "We move three times at every highland term."

The daughter-in-law of Havva Kara, Cemile Kara, stated that milk and dairy products are considered a must among Yörüks in the kitchen, noting: "I have been busy with animal breeding my entire life. Every day, we milk the animals and make cheese, yogurt and curd using the milk. These traditions are quite enjoying for us. We always use milk, yogurt and cheese while preparing ifthar. Traditional flatbread is also a must for us."

Cooking "gözleme" over a wood fire for ifthar, Zehra Pantır said that most of the time during Ramadan, they break their fast eating "gözleme" which is filled with cheese. 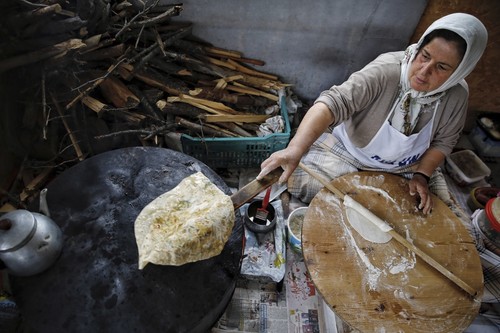 Stating that she kneads the flour only with water and salt and without using yeast, Pantır said, "I roll the dough 30 minutes after kneading it. I put curd, white cheese and cheddar in it and cook it over a wood fire. It is such a tasty food, and an essential of yörük ifthars."

Director of Akdeniz University's Yörük Culture Application and Research Center, Assistant Professor Fatih Uslu said that the Yörüks still continue to live a nomadic life in the Taurus Mountains as a group which preserves the traditions of nomadic culture.

Stating that the Turkish flag can always be seen flying on yörük tents, Uslu said, "The Yörüks are really patriotic people. They were forced to settle in the Taurus Mountains as frontiersmen during the time of the Seljuks. The Ottomans also assigned them as frontiersmen and Islamic raiders to Rumelia."

Implying that Yörüks pay tremendous attention to Ramadan, Uslu said, "Holy months have great importance for this nomadic tribe. They have preserved the nomadic ifthar tables of Middle Asia since they first emerged.Here we are discussing the history of the ages. The Yörüks freeze meat to be able to preserve it as they do not have fridges in the highlands. They consume traditional nomadic food at ifthar."

Stating that the Yörüks make dried fruit compote to be able to cope with thirst and molasses with tahini, Uslu said, "The Yörüks have consumed the same traditional foods for ages."