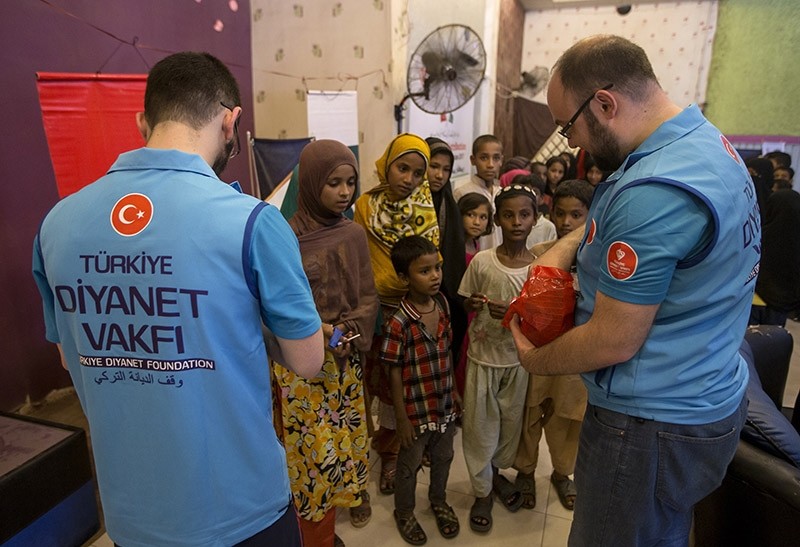 The Türkiye Diyanet Foundation (TDV) distributed food aid packages to 350 families, including widows and orphans who had come from Myanmar and Bangladesh, in the Pakistani city of Karachi as part of the foundation's Ramadan-related activities.

TDV Pakistan Project Manager Ahmet Kandemir stated that the foundation aimed to reach the oppressed and needy across the world by organizing Ramadan activities in 278 regions across 64 countries this year.

Speaking about the event organized in Pakistan, Kandemir said that the TDV would deliver food aid to 1,500 families in Karachi, Islamabad and Multan throughout the week. The packages included basic household items like flour, oil, lentils, rice and dates, Kandemir said.

The aid group, connected to Turkey's Presidency of Religious Affairs (Diyanet) will also organize an iftar, the fast-breaking meal, for at least 500 people.

Kandemir also said he hoped that the bond between Turkish and Pakistani nations would strengthen even further.

"We cannot forget the support that the Pakistani people gave us during the [Turkish] War of Independence. Pakistani women sent their bracelets to Turkey for financial support. We owe our gratitude to these people. We had to be in Pakistan this Ramadan, just as we have been for the past years," Kandemir added.

Turkish aid agencies plan to reach millions of people across the world with food aid during Ramadan. Families in Africa, Asia, the Middle East and the Balkans will enjoy iftar dinners from charities, while The Turkish Red Crescent aims to reach 20,000 families over the month, concentrating its iftar tents in the northern Syrian province of Idlib and Gaza in Palestine. Ships loaded with over 60,000 tons of humanitarian aid will head to countries hit by famine, such as South Sudan, Somalia, Kenya, Ethiopia and Yemen. Iftar meals will be provided by the İyilikder charity in 15 countries, including Bosnia-Herzegovina, Syria, Kyrgyzstan, Niger and Palestine. The Sadakataşı Foundation, and the Cansuyu Charity and Solidarity Organization will also provide iftar meals for refugees around the globe.

Ramadan is also an Islamic month of giving, and wealthy, local administrations and NGOs in Muslim-majority countries often spearhead aid campaigns for the poor during the month. The "Fitr "or "zakat al-fitr" is a lesser form of the "zakat" – the obligatory charity given to the poor by every Muslim who can afford it – during the holiday at the end of the month.