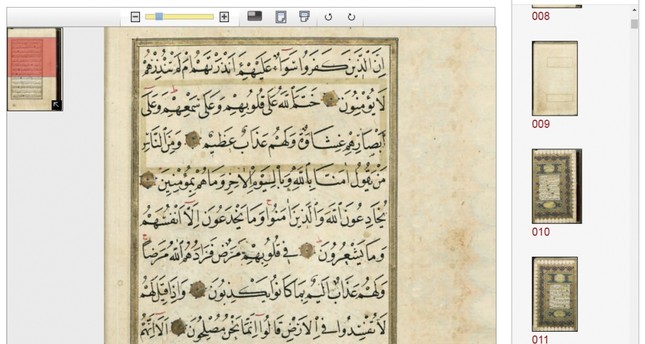 The museum’s The Arts of Book and Calligraphy Collection offers copies of calligraphic compositions, albums, panels, imperial ciphers and copies of the Quran.

In academia, the archive had been a dominating subject for social scientists studying modernity over the past three decades. Under the influence of philosophers like Walter Benjamin and Michel Foucault, the classification and categorization of information came to the fore as a central subject of intellectual inquiry. Museums followed the trend and, over the following decades, started hosting shows devoted to archives. Over the past couple of years, the focus seems to have shifted onto creating interactive and artful interfaces to the archive, with an eye to combining functionality and beauty.

On the front page a picture of Emirgan, taken in the 1950s, invites visitors inside. This image of the neighborhood where the physical museum is located defines the experience from the beginning: The innocent image emanates an air of nostalgia.

"digitalSSM, implemented by the SSM in collaboration with Sabanci University Information Centre, is a pioneering project in Turkey, encompassing the transfer of all the collections and archives of a museum to the digital media," according to the digitalSSM website. The digital archive consists of more than 77,000 high resolution images and features the contents of the Museum's Arts of the Book and Calligraphy Collection, the Painting Collection, the Abidin Dino Archives and the Emirgan Archives.

Curator of the calligraphy and the arts of the book collections Ayşe Aldemir Kilercik and archive manager Osman Serhat Karaman have worked meticulously on the digitalization project, aware of its potentials and pitfalls. The visual interface of digitalSSM is austere and dry, which turns the experience into a scholarly, rather than touristic one.

"The scanning and archiving processes were in conformity with international standards, and the 'CONTENTdm' software used by Yale University, Purdue University and other prominent universities and institutions was adopted," the project managers say. "The software, which will provide worldwide access to SSM collections and archives, is endowed with a user-friendly advanced keyword search system. The digitalSSM project's aim is to make a contribution to Turkey's cultural heritage by providing a significant source to the use of scholars, researchers, curators, collectors, art history students and fans of Turkish and Islamic art in Turkey and abroad."

A tap on the preferred Quran brings the visitor to a new interface where the contents of the book are presented as thumbnails. Visitors can search inside books and save important pages for future use.

The museum's Painting Collection can be browsed under a different section. The collection that features paintings by Raphael, Konstantin Kapıdağlı, Osman Hamdi Bey, Fausto Zonaro, Ivan Ayvazovski, Şeker Ahmed Paşa, Süleyman Seyyid, Nazmi Ziya Güran, İbrahim Çallı, Feyhaman Duran and Fikret Mualla among many others focuses on the years between 1850 and 1950 and the period of early Western style Turkish painting. Here I viewed "The Artist Girl and Her Atelier," a painting by Halil Paşa that depicts an Ottoman woman painting in her traditionally furnished room. It was accompanied by a lengthy text describing the artist's life and significance of this particular work.

The Abidin Dino Arcive of digitalSSM features drawings and texts by the artist as well as his correspondence with his friends and his wife Güzin Dino. Among many interesting documents here is a digitalized copy of late novelist Yaşar Kemal's letter to the artist from Cambridge. Dated April 10, 1963, the letter discusses the translation of Kemal's books for French publishing house Gallimard. The letter has been scanned and stored in PDF format and it is a joy to read the great novelist's letter in its original form.

The final section of digitalSSM is the Emirgan Archive featuring photographs of the neighborhood from the early 1900s. Those images show ferries and wooden houses and street views of a beautiful village. Those photographs may, and should, inspire in some a desire to visit the latest exhibition at Emirgan's Sakıp Sabancı Museum.

Share on Facebook Share on Twitter
Previous in Religion A new way of doing diplomacy based on Quranic teachings will pave... Next in Religion More than two million Muslims from around the world began the hajj...
DAILY SABAH RECOMMENDS