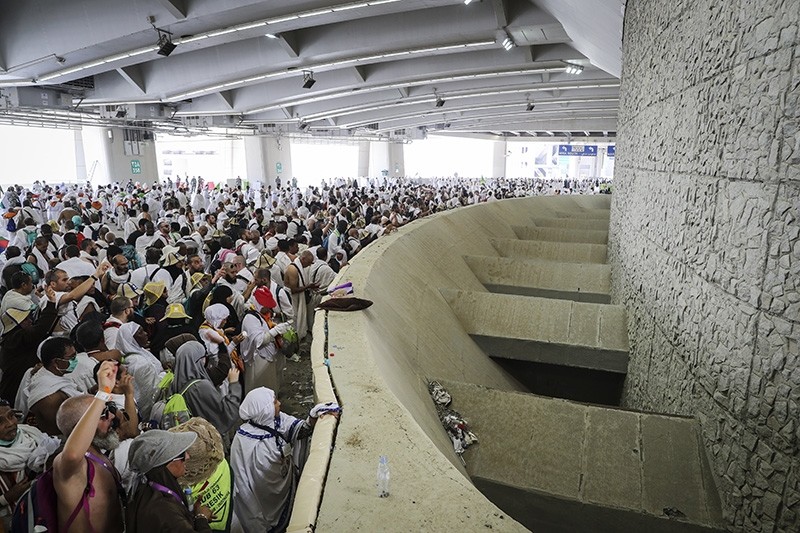 Muslim worshipers throw pebbles as part on the symbolic al-A'qabah (stoning of the devil ritual) at the Jamarat Bridge during the Hajj pilgrimage in Mina, near Mecca, Saudi Arabia, Sept. 01, 2017. (EPA Photo)
by Compiled from Wire Services Sep 01, 2017 12:00 am

In stifling heat, a Saudi security guard sprayed Muslim pilgrims with water as they advanced through Mina for the final rite of the hajj, the "Stoning of the Devil" that has proved lethal in past years.

This year a total of 2.35 million people carried out the hajj pilgrimage, which was the most crowded one of last five years, Saudi Arabia's statistical authority said. It added that 229,308 of these pilgrims were either Saudi citizens or people holding residency permits.

The pilgrims from across the globe were gathered in Saudi desert valley of Mina, a tent city located around 7 kilometers north-east of Mecca, on Friday for the final major ritual of the annual hajj pilgrimage at the Jamarat Bridge, the scene of a stampede in 2015 that left 767 dead according to the official numbers, but many outlets claim the number was around 2,300.

For many, the pilgrimage, which runs five days and which all Muslims must perform at least once in a lifetime if physically and financially able, has been a lifelong dream.

Amin Hashkir, a 26-year-old from Casablanca in Morocco, travelled to western Saudi Arabia, home of the holiest sites in Islam, together with his sister and mother, who was unable to physically perform the stoning rite herself.

"My father passed away in 2011, and we've been trying to make it here ever since to perform hajj for him," Hashkir explained on a sidewalk in Mina, near Mecca. "It was what he felt was missing from his life."

Hashkir's mother was also counting on her son to fulfil her dream of hajj. "My mother is sick, so I offered to throw the stones for her."

The 2015 stampede marked the deadliest disaster to ever strike the hajj, one of the five pillars of Islam. Hundreds of more lives have been lost in several stampedes during the stoning ritual over the past 20 years.

Saudi Arabia says it has deployed more than 100,000 security personnel to keep pilgrims safe this year, whereas 31,569 vehicles were brought in to transport the pilgrims.

The huge crowds, many holding umbrellas to shield them from the sun, took part in the stoning rite under strict surveillance, with police tape guiding the flow of pilgrims, cameras everywhere and helicopters hovering overhead.

"It's different every year," said Najat Malik, 45, a Sudanese Red Crescent employee who travelled from Khartoum for the hajj.

"Some years there are less pilgrims because of fears and warnings of disease. But this year, I feel like there are a lot more people here."

Hundreds of thousands of pilgrims made their way toward a massive multi-story complex in Mina after dawn on Friday to cast pebbles at three large columns. It is here where Muslims believe the devil tried to talk the Prophet Ibrahim (Abraham) out of submitting to God's will.

Traditionally, seven pebbles are thrown at a post representing the devil. Since 2004, the post has been replaced by walls to accommodate the rising numbers of pilgrims.

Clad in seamless pieces of white cloth, the pilgrims, chanted "Allah-u Akbar" (God is the greatest) each time they cast a pebble. Their snow-white garments symbolize equality, religious unity and pursuit of spiritual renewal.

After finishing the stone-throwing ritual on the first day of Eid al-Adha, male pilgrims traditionally shave or cut their hair and change out of their seamless robes. Women cut a lock of their hair.

Male and female pilgrims then go to Mecca again walk all the way around the Kaaba, which represents the metaphorical house of God and the oneness of God in Islam. Observant Muslims around the world face toward the Kaaba during the five daily prayers.

Later in the day, they return to Mina to stay overnight and throw stones for two more days.

By Friday afternoon, temperatures had reached 41 degrees Celsius (106 Fahrenheit), with many suffering from dehydration or heat exhaustion.

"Two pilgrims fainted right in front of me this morning," said Almas Khattak, a Pakistani volunteer in Mina.

At the bridge, an elderly woman had collapsed onto a stretcher as her relatives tried to revive her, splashing her face with water before calling for assistance.

The shadow of the 2015 stampede still looms large over the ritual.

Iran, which with 464 dead reported the largest number of victims in the disaster, did not send its pilgrims last year to the hajj in Saudi Arabia, as authorities in the two countries failed to agree on logistics.

Iranian authorities say more than 86,000 Iranian pilgrims are taking part this year, each equipped with an identity bracelet in case of any accident.

This year's Hajj comes amid a major crisis between a Saudi-led Arab bloc and Qatar over the tiny emirate's alleged support for extremist groups, a charge that has denied.

Qatar has accused Saudi Arabia of creating obstacles for Qatari pilgrims, a claim Riyadh had rejected.

Two weeks before the Hajj that started on Wednesday, Saudi King Salman ordered the opening of his country's border border with Qatar to allow in Qatari pilgrims.

Some 1,564 Qatari pilgrims are attending this year's Hajj, according to Saudi officials.

The stoning ritual, which lasts under Sunday, marks the first day of the Eid al-Adha (Feast of the Sacrifice), which commemorates Prophet Ibrahim's willingness to sacrifice his son.

Muslims believe Ibrahim's faith was tested when God commanded him to sacrifice his only son Ismail. Ibrahim was prepared to submit to the command, but then God stayed his hand, sparing his son. In the Christian and Jewish version of the story, Abraham is ordered to kill his other son, Isaac.

The final days of hajj coincide with the Eid al-Adha to commemorate Ibrahim's test of faith. For the holiday, Muslims slaughter livestock and distribute the meat to the poor.