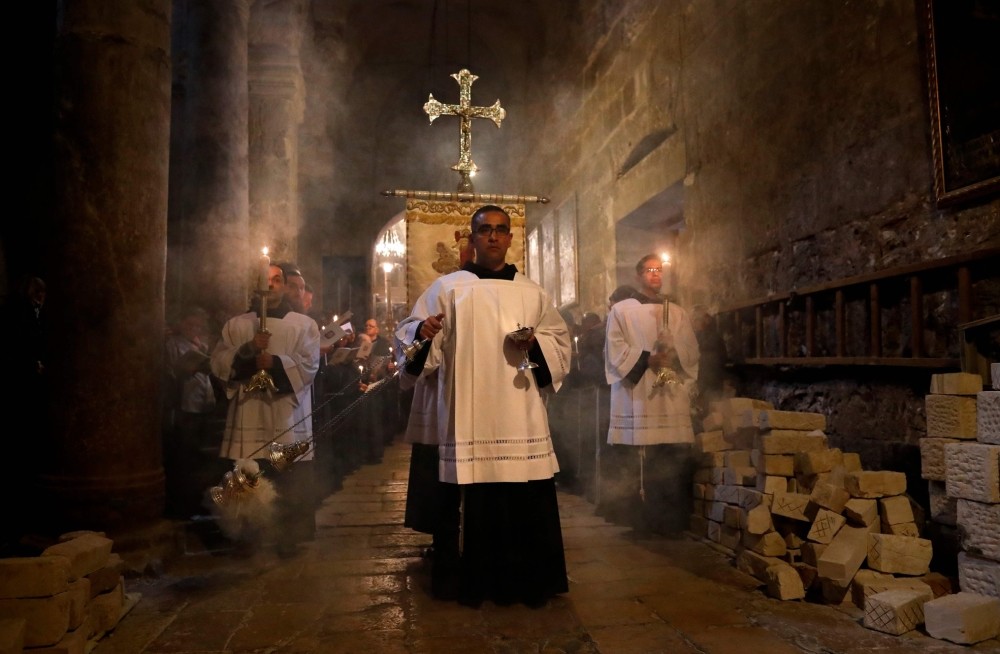 Franciscan friars pray during the Lenten procession inside the Church of the Holy Sepulchre in the Old City of Jerusalem.
by Apr 05, 2018 12:00 am

Wearing traditional brown robes held in place by a white belt with three knots symbolizing vows of poverty, chastity and obedience, Franciscan friars have long been a part of Jerusalem's landscape.

Dispatched to the city 800 years ago by the Catholic order's founder, Saint Francis of Assisi, the Franciscans have for centuries ensured a permanent Christian presence in the Holy Land.

Pilgrims know them primarily as the Guardians of the Holy Sepulchre, protecting the site where Jesus is believed to have been crucified and buried.

Each year, hundreds of thousands of people visit the Church of the Holy Sepulchre, considered by many to be Christianity's holiest site.

But the Franciscans, who are also responsible for the Church of the Nativity in Bethlehem where Jesus is traditionally considered to have been born, are not limited to only symbolic roles.

Based in the monastery of Saint Saviour in Jerusalem's Old City, the order also runs schools for 10,000 students, half of whom are Muslim.

Brother Paulo, a young Brazilian seminarian, teaches and coaches basketball to Palestinian students at the Terra Santa school, which is supported by the monastery.

The friars also manage hundreds of apartments in the old city, hostels for pilgrims, and a series of charities for Jerusalem's shrinking Christian community.

As the friars grow old or are weakened by illness, the monastery provides care for them in an infirmary on its roof.

"When anxiety gets the best of me, it's enough for me to contemplate the Holy Sepulchre's bell tower to find peace," he said.