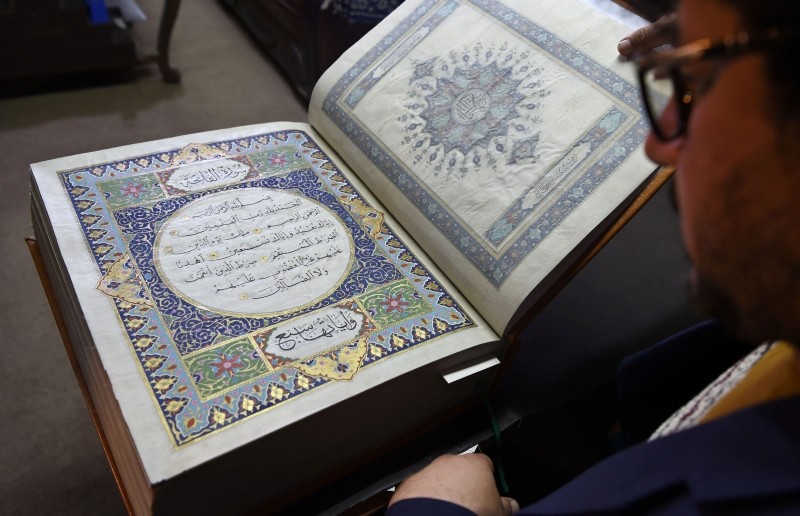 In this photograph taken on April 19, 2018 Afghan master miniature artist Mohammad Tamim Sahibzada shows a handmade Quran made with silk fabric at the Turquoise Mountain Foundation in Mourad Khani, in the old city section of Kabul. (AFP Photo)
by French Press Agency - AFP May 23, 2018 12:00 am

One of the only Qurans ever made from silk fabric has been completed in Afghanistan -- a feat its creators hope will help preserve the country's centuries-old tradition of calligraphy.

Each of the Islamic holy book's 610 pages was produced by hand in a painstaking process that took a team of 38 calligraphers and artists specializing in miniatures nearly two years to finish.

Bound in goat leather and weighing 8.6 kilograms (19 pounds), the Quran was produced by Afghan artisans, many of them trained at British foundation Turquoise Mountain in Kabul.

"Our intention was to ensure that calligraphy does not die out in this country -- writing is part of our culture," Khwaja Qamaruddin Chishti, a 66-year-old master calligrapher, told AFP in a cramped office inside Turquoise Mountain's labyrinthine mud-brick and wood-paneled complex.

With the Quran considered a sacred text, calligraphy is highly venerated in Islam and Islamic art.

"When it comes to art we cannot put a price on it. God has entrusted us with this work (the Quran)... and this means more to us than the financial aspect," Chishti continued.

Using a bamboo or reed ink pen, Chishti and his fellow calligraphers spent up to two days carefully copying Quranic verses onto a single page -- sometimes longer if they made a mistake and had to start again.

They used the Naskh script, a calligraphic style developed in early Islam to replace Kufic because it was easier to read and write.

The decoration around the script, known as illumination, was more time-consuming, each page taking more than a week to complete.

A team of artists used paint made from natural materials, including ground lapis, gold and bronze, to recreate the delicate patterns popular during the Timurid dynasty in the 15th and 16th centuries in the western city of Herat.

"All the colors we have used are from nature," Mohammad Tamim Sahibzada, a master miniature artist who was responsible for creating the vibrant colors used in the Quran, told AFP.

Sahibzada said working on silk fabric for the first time was challenging. The locally sourced material -- all 305 meters (1,000 feet) of it -- was treated in a solution made from the dried seeds of ispaghula, or psyllium, to stop the ink from spreading.

Turquoise Mountain began work in 2006 in Kabul with the aim of preserving ancient Afghan craftsmanship, including ceramics, carpentry and calligraphy.

It hopes the silk Quran will generate demand for more handmade Islamic religious texts that could create employment for its artisans and help finance the institute.

"We will show it to other Islamic countries to see if it is possible to create job opportunities for graduates to work on another Quran," said Abdul Waheed Khalili, the organization's Afghan director.

For now it will be kept in a specially made hand-carved walnut wooden box to protect its delicate pages from the elements at Turquoise Mountain's offices, which are in the restored Murad Khani, a historic commercial and residential area in Kabul's oldest district.

There Turquoise Mountain has trained thousands of artisans with the support of Britain's Prince Charles, the British Council, and USAID.

"The copying of the Quran onto silk is very rare," country director Nathan Stroupe told AFP.

He said the project has been "an amazing way to train our students at an incredibly high level in a very traditional type of work".