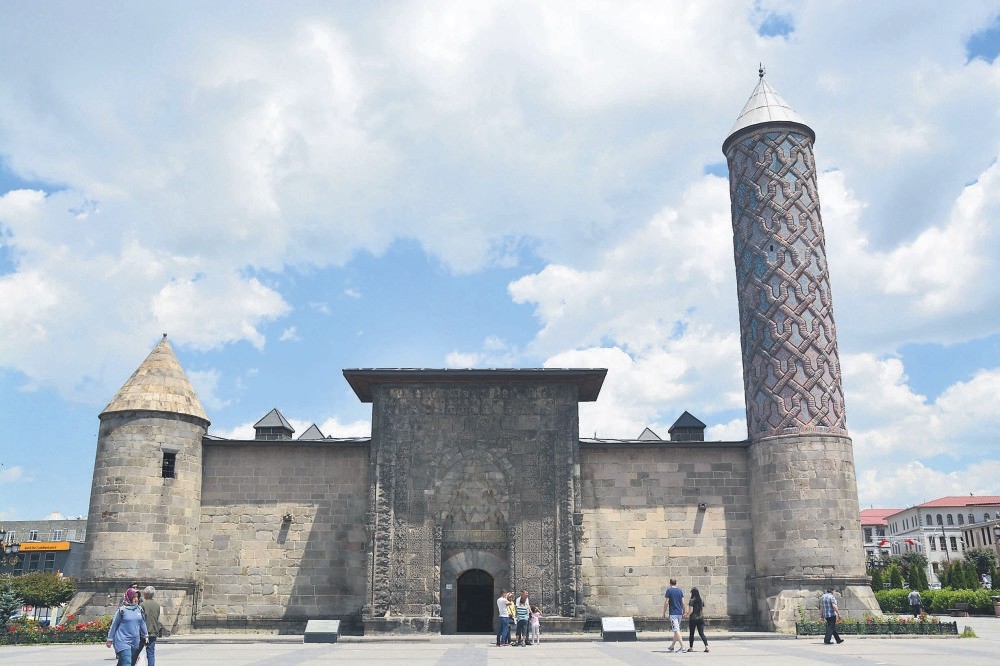 Yakutiye Madrasah, which is placed among the most unique examples of Seljuk architecture and symbols of the Erzurum region, has recently became a popular haunt for local and foreign tourists.

The historical building, which was built by the order of Jamal-ud-Din Yaqut in 1310 on behalf of Mahmud Ghazan and Bolugan Khatun in the period of Ilkhan Sultan Oljeitu in the district of Yakutiye, both reflects the traditional Seljuk architecture and is among the madrasahs featuring a closed court yard which have four iwans, which are vaulted or domed spaces set back from the central court.

The tiles on the minarets and doors of the madrasah reflect the importance placed on balance and symmetry. Their symbolic descriptions and beautiful vegetal and geometric motifs on the front are unique.

The Yakutiye Madrasah draws the attention of both local and foreign tourists and features a precious Turkish Islamic Museum within its walls and therefore is flooded by a constant stream of visitors, especially on weekends.

Mehmet Doğan Öz, the tourist guide of a group coming from Denizli told Anadolu Agency (AA) that there are many historical buildings in Erzurum.

Reminding us that the Yakutiye Madrasah was a flourishing university in its day, Öz continued, "The tree of life, leopard and one-headed eagle motifs in the madrasah are the most striking and extraordinary works of art. They really show how superb the stonemasonry in this construction is. There is a cultural and mythological richness here. The part which draws attention most is the minaret. The madrasah was closed as restoration work was being conducted here until very recently. When the work was completed, we added it to our tour program."

Sedat Efe, who from the Ordu region, said that the weather of Erzurum is really perfect. "I was wondering about Erzurum as I have never visited it before. There are many historical buildings in the city. We visited the Çifte Minareli [Double Minaret] Madrasah and Yakutiye Madrasah. The work which is on display at the museum here is very interesting, and there are many things that I have never seen before. We examined them with great interest," Efe stated.