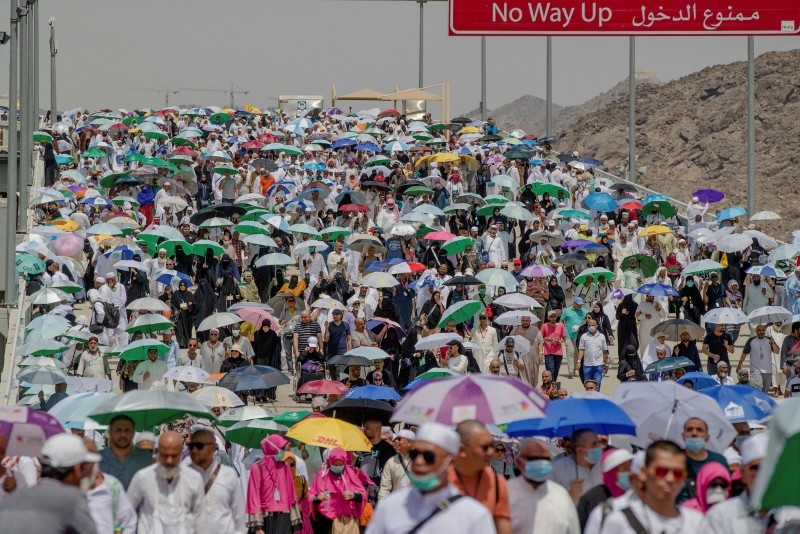 Muslim pilgrims walk towards Jamarat to cast stones at three huge stone pillars in the symbolic stoning of the devil on the last day of the annual hajj pilgrimage in Mina, outside the holy city of Mecca, Saudi Arabia, Aug. 23, 2018. (AP Photo)
by Aug 23, 2018 12:00 am

More than two million Hajj pilgrims headed back to Mecca for final prayers on Thursday as organizers said the world's largest annual gathering of Muslims had gone smoothly in the face of political tensions and huge logistical challenges.

Pilgrims were given electronic bracelets this year to help manage the flow of people through the sites.

"We aspire to (have) a smart Hajj by using technology in all future activities," he told reporters in Mina, east of Mecca. "The development of the holy sites, which will be implemented soon, depends entirely on technology and rapid communication."

Thousands of worshippers participated in a symbolic stoning of the devil, part of the Hajj rituals, in Jamarat before returning to Mecca where the Grand Mosque filled with worshippers preparing to depart.

Saudi Arabia stakes its reputation on its guardianship of Islam's holiest sites - Mecca and Medina - and its organization of the pilgrimage. It is hoping to expand attendance to help build its tourism industry.

More than 2.37 million pilgrims came this year, most of them from abroad, for the five-day ritual. Attendance is a religious duty, once in a lifetime, for every able-bodied Muslim who can afford it.

"I feel I am born once again," said Egyptian pilgrim Sabah Saeed, 49. "This is a great blessing from God and it makes you so happy."

More than 110,000 members of the security forces and 32,000 health workers were on hand this week to maintain safety and provide first aid, said organizers.

Saudi Health Minister Tawfiq al-Rabeeah said the pilgrimage had passed without any outbreak of disease, a perennial concern.

A crush in 2015 killed nearly 800 pilgrims, according to Riyadh, when two large groups of pilgrims arrived at a crossroads east of Mecca. Counts by countries of repatriated bodies showed over 2,000 people may have died, including more than 400 Iranians.

Saudi authorities said at the time that the crush may have been caused by pilgrims failing to follow crowd control rules, and King Salman ordered an investigation but the results were never announced.

Asked about the probe on Thursday, Prince Khaled told reporters it was not within his purview, without specifying which government entity is handling it.

Some 86,000 Iranians attended Hajj this year amid a diplomatic rift between Tehran and Riyadh, which are locked in a struggle for regional supremacy. Their dispute was exacerbated by the 2015 crush.

Around 300 pilgrims came from Qatar, which is locked in a year-old diplomatic row with Saudi Arabia over alleged support for terrorism, which Qatar denies.