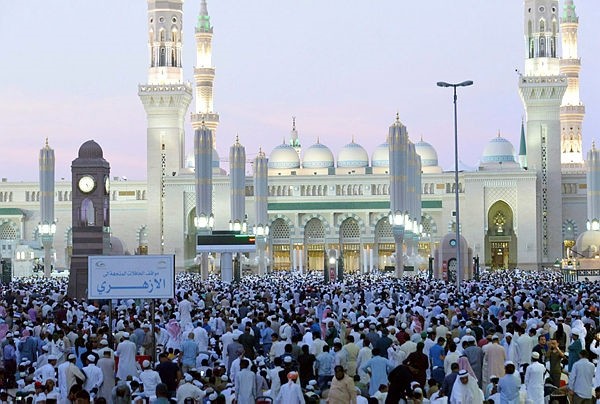 Muslim worshippers gather at the Prophet Mohammed mosque for morning Eid al-Fitr prayers on July 6, 2016 marking the end of the holy month of Ramadan. (AFP Photo)
by Anadolu Agency Sep 11, 2018 12:00 am

Muslims throughout the world on Tuesday commemorated the Hijra, when Prophet Muhammad -- peace be upon him -- set out from Mecca for the blessed city of Medina, where he spent the rest of his life.

The day of the Hijra is recognized as an official holiday in many Arab and Muslim countries, including Indonesia, Egypt, Malaysia, Saudi Arabia and Palestine.

In 622 A.D., Prophet Muhammad, acting upon Allah's instructions, set out from Mecca to Medina -- along with hundreds of followers -- to establish a staging point for the new religion, which was destined to sweep across the region within a few generations.

In 638 A.D., Islam's second caliph, Omar bin al-Khattab, a close companion of the Prophet, unveiled the new Islamic calendar using the day of the Hijrah as its starting point.

The Hijra-based calendar was officially used by the greatest Islamic caliphates, including those of the Abbasids, Umayyads and Ottomans.

Muslims consider the month of Muharram, the first month of the Islamic year, one of the year's holiest months, as many landmark events in Islamic history took place in Muharram.

On the tenth day of Muharram, Muslims mark Ashura, which commemorates the parting of the Red Sea by Prophet Moses and the ancient Hebrews' escape from Pharaoh's wrath.

Shia Muslims mark Ashura each year by recalling the martyrdom of Imam al-Hussein, grandson of Prophet Muhammad, at the infamous Battle of Karbala in the year 680 A.D.