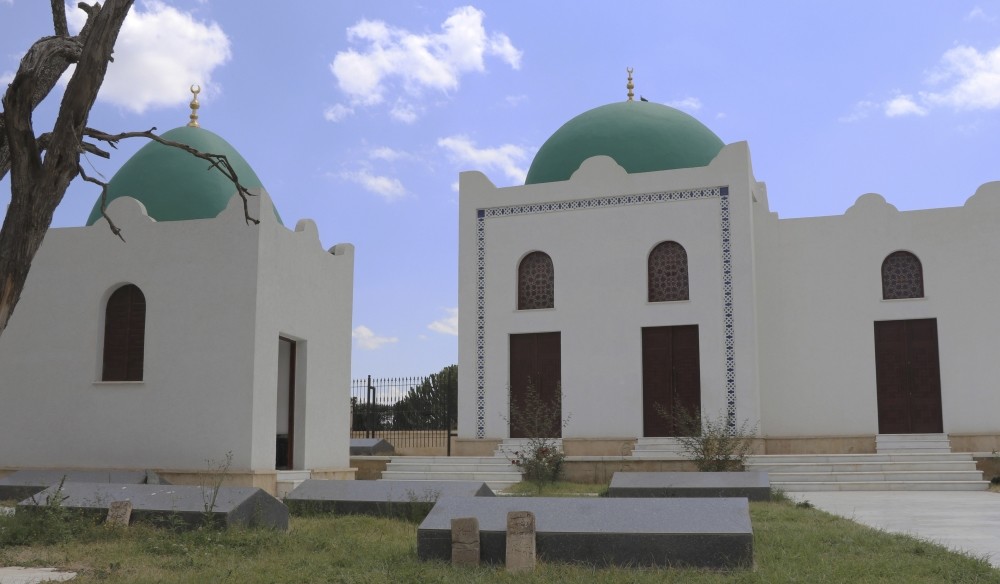 Tu0130KA announced the renovation of the mosque was part of a scheme to promote common cultural values and assets abroad and to contribute to the development of intergovernmental cooperation.
by Anadolu Agency Oct 23, 2018 12:00 am

It has only been a few months since an ancient mosque in Ethiopia got a major face-lift thanks to Turkey's aid agency, but the Islamic heritage site is already seeing growing numbers of international tourists

Located in the town of Wuqro, 790 kilometers (over 490 miles) north of Ethiopia's capital Addis Ababa, Al-Nejashi is said to be the first mosque in Africa. It is named after Nejashi, the then Ethiopian king who hosted companions of the Prophet Muhammed (Peace Be Upon Him) who escaped persecution in Mecca.

The companions fled persecution in Saudi Arabia and came to Ethiopia on the orders of the prophet who said there was a just Abyssinian king. The mosque has recently been renovated by the Turkish Coordination and Cooperation Agency (TİKA).

According to TİKA, the renovation of the mosque was part of a scheme to promote common cultural values and assets abroad and to contribute to the development of intergovernmental cooperation.

The mosque stands majestically on a spacious location, which also is the site of the 15 tombs of the prophet's companions. A road leads to this glorious site at a short distance from the town of Wuqro, in the regional state of Tigray.

Al-Nejashi saw the last Ashura celebration as a uniquely colorful event with Ethiopian Muslims side by side with their Eritrean brothers.

Nasir Saidi Salih, a visitor from Germany, was obviously delighted to have the opportunity to make it to the site.

Pointing to the whitewashed outside walls and green minarets, Salih said, "From what I have read, the mental picture I had about the mosque was it that it was old. But, it actually looks it was built one or two years ago." 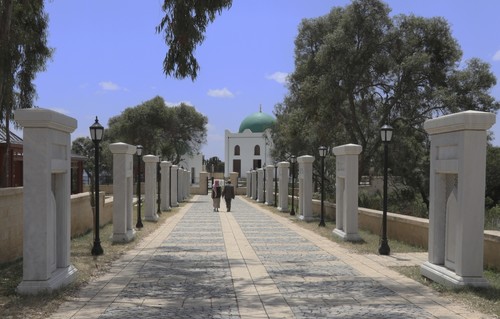 The mosque is also the site of the 15 tombs of the prophet's companions.

"It is a nice surprise for us," he said, explaining how he and his wife Flourans Lang ended up at the ancient site of Islamic heritage. The couple first visited the walled city of Harar in eastern Ethiopia - which also reveals ancient Islamic tradition and the relics of which TİKA helped preserve.

According to Salih, they learned about Al-Nejashi from the residents of Harar who recommended to the couple that a trip to "Africa's first mosque" would be worth the trip.

"We did some research and saw that it was on the road so we came here," he told Anadolu Agency (AA) with a smile on his face. "For the restoration and the investment, it is a good thing for Islam and for the world. I think everybody should come here. After Mecca, you should come here."

Lang, for her part, said, "We find it very, very beautiful. For us, Ethiopia has always the image of being a place of peace. We are happy to be able to come here."

"There is so much to see and it is very important place of Islam. It is a very nice heritage," she said, also advising people living anywhere in the world to consider a trip to Al-Nejashi - where one would get a rare chance of revisiting the proud history of the Ethiopians who embraced refugees.

"I think it is good that Ethiopia and the government of Turkey have this relation. It is good because the site is important," she added.

Ali Mohammed Ibrahim, the imam of the mosque, said he is grateful to TİKA for having renovated Al-Nejashi.

"After the renovation the number of visitors greatly increased," Ibrahim told AA. "Not only Muslims, but Christians are also coming here to visit the mosque and its proud history, which the heritage site is full of."

Ibrahim went on to say the site offers a serene and safe stay to visitors, and that more people should come visit as it is "worth traveling from any distance to come here." He recalled that the last Ashura was celebrated this year with prayers and other religious ceremonies as Ethiopian Muslims assembling at the mosque were joined in by their Ethiopian brethren after two decades.

Eritrea seceded from Ethiopia in 1993. From 1998 to 2000, the two neighbors fought a bloody conflict in which tens of thousands of people - on both sides - are believed to have perished. In an April inaugural address, the Ethiopian prime minister offered an olive branch to the Eritrean president, ending two decades of hostile relations.

After the renovation, the bright features of the church stand in stark contrast with the meadows in its surroundings, which have fields strewn with low-growing bushes.

Now in tune with the season, the sky is high and blue and the weather is pleasantly hot and sunny. Meanwhile, the locals who come to the ancient Al-Nejashi mosque expect people to explore its glorious history. The mosque is a mere representation of the history that laid the foundation for the sense of mutual respect and love Ethiopian Muslims and Christians have for each other to this day.